Physical and Mechanical Properties of Fast Growing Polyploid Acacia Hybrids (A. auriculiformis × A. mangium) from Vietnam
Next Article in Special Issue

In Northern Europe, climate change may facilitate the prevalence of Scots pine, yet also promote the spread of pathogens attacking this species. A common biotic risk for Scots pine in nurseries and young stands is Lophodermium needle cast, primarily caused by Lophodermium seditiosum, which negatively affects the survival and growth of saplings. Reduced tree growth has been observed several years after damage by Lophodermium needle cast. However, for decision-making in protection or resistance breeding, an estimate of financial loss is important. Thus, the study aimed to assess the long-term influence of Lophodermium needle cast on the growth and financial value of Scots pine stands. The effect of needle cast damage during the sixth growing season on growth at the age of 17 years was evaluated in a control-crossed Scots pine progeny trial, and the results indicated a significantly negative effect on the height and diameter of the trees. A significant family effect also existed on the severity of the needle cast damage. Long-term simulations indicated that severely damaged Scots pines had a reduced equivalent annual annuity (EAA) of almost 100% at the final harvest. More intensive early management to reduce stand density could partly compensate for losses caused by needle cast. A higher EAA for the most resistant group of trees regardless of the stand management scenarios suggests an economically justified potential for improved resistance. Strong negative (−0.62 to −0.70) correlations of height and survival with the proportion of severely affected trees at the family mean level implies that resistant genotypes can be selected along with improved growth in progeny trials, which are affected by needle cast.
Keywords: tree resistance; Scots pine pathogens; biotic risks; financial analysis; equal annual annuity; tree breeding tree resistance; Scots pine pathogens; biotic risks; financial analysis; equal annual annuity; tree breeding

In the hemiboreal regions of Europe, climate change can lead to an increased share of Scots pine (Pinus sylvestris L.), substituting for other tree species, such as Norway spruce Picea abies (L.) H. Karst. [1]. Nevertheless, Pinus spp. also have potential risks. They are more susceptible to needle cast and needle blight than other conifers [2,3]. Climate change has a direct influence on both trees and pathogens, and the interactions between them, resulting in changed disease effects and more frequent and severe attacks [4,5,6,7,8]. Since the 1990s, several severe outbreaks of Lophodermium needle cast caused by Lophodermium seditiosum in the Baltic region, Poland, and Fennoscandia have occurred, and it is still one of the most common needle diseases of pines [9,10,11,12,13,14].
Lophodermium is a complex fungal genus consisting of both needle endophytes and pathogens. The pathogenicity of L. seditiosum has been demonstrated in vivo [15], and it causes needle loss of young pines in nurseries and forest stands [3,11,16]. Trees retain needles for several years; however, older needles are less photosynthetically active than younger ones [17]. Thus, a current year needle infection leads to reduced growth (annual increment) and survival [18]. Moreover, biotic disturbances may interact with each other [19], and the damage to forest stands could be the result of a complex of infections. For instance, the outbreak of L. seditiosum in Estonia coincided with the serious spread of Dothistroma septosporum [7,12]. The severity of Lophodermium needle cast damage decreases with age, and trees older than 10 years are rarely infected [3]. Nevertheless, growth reduction related to the defoliation caused by Lophodermium needle cast can last several years after the attack [20].
The trees’ genetic response and adaptability to new climate conditions are slower than those of the pathogens [6,21]. As a result, pathogens can increasingly reduce the monetary value of forests. Therefore, management practice might be reconsidered and altered to mitigate the effect of pathogens on forest stands [22]. Although disease by itself ensures natural selection [23] and fungicides may be an effective method of preventing forest diseases in nurseries [6,16,24], resistance against fungal pathogens could be included in breeding programmes [6,25,26,27,28,29], thus preventing severe damage and providing improved yield and stem quality. Genetic effects on the resistance to Lophodermium needle cast have been indicated [3,30,31,32,33].
Information on the longer-term effects of Lophodermium needle cast is important to project timber and financial losses across the rotation period and evaluate alternative management scenarios to mitigate risks. Nevertheless, most studies in European forests have focused on natural disturbances, such as wind, fire, and (to some extent) pests, while the effects of pathogens have been relatively little studied [34,35,36,37,38,39]. In addition, economic analysis of natural forest disturbances to a large extent had focused on wildfires [19] but the long-term effects of fungal pathogens, including Lophodermium needle cast, on forest management profitability have been sparsely analysed. Therefore, the aim of this study, based on the progeny trial information, is to assess the long-term influence of Lophodermium needle cast on the growth and financial value of Scots pine stands.

The study was conducted in a Scots pine control crossing progeny trial established in the eastern part of Latvia near Kalsnava (56°40’ N, 25°57’ E). The control crosses were done using 10 clones of local (Latvian) origin. In total, 98 full-sib families were obtained and represented in the trial. The trial was established on rather poor, sandy soil corresponding to the Vacciniosa forest type [40], and the trees were planted in four replicates of 15-tree-block-plots for each family with a planting density of 5000 trees ha−1 (spacing 2 × 1 m). In total, 4154 initial planting spots were available for analysis, since some families were not present in all four replications and some plots were excluded from analysis due to low initial survival shortly after planting.
In the trial, needle cast infestation may have originated from the surrounding mature and young Scots pine stands. Needle cast symptoms caused by Lophodermium spp. were identified by a single observer using the macroscopic features of the fungus [15]. The damage was assessed in June of the sixth growing season by visually evaluating a proportion of the needles on the last height increment, which was infected at the end of the previous growing season and thus turned yellow then brown during the given season (at the time of the assessment). The needle cast damage assessment was done on a five-grade scale typically used in local nurseries and progeny trials according to the proportion of damaged needles: Grade 1 corresponds to 0% to 5%, Grade 2 to 6% to 35%, Grade 3 to 36% to 65%, Grade 4 to 66% to 95%, and Grade 5 to 96% to 100% of the damaged needles. For the analysis of the family mean level, the proportion of severely damaged trees was used, corresponding to the pooled proportion of the trees in Grades 4 and 5. The tree height (±0.01 m) and diameter of the root collar (±0.001 m) at the age of 5 years, and the tree height (±0.1 m) and stem diameter at breast height (DBH ± 0.001 m) at the age of 17 years were measured.

2.3. Evaluation of the Financial Outcome

The financial value at the final harvest was estimated from five-year period simulations in which the tree dimensions at a certain age were obtained using the local growth models (Supplement 1) [42]. Regarding the small number of trees corresponding to grades 1 and 5, simulations were done for each of three pooled damage grade groups (grade 1 to 2, grade 3, and grade 4 to 5), using group mean values of height, DBH, number of trees, and basal area at the age of 17 years as input data. No modifications in models were applied for different damage grades.
In simulations, three stand densities at the age of 17 years were used as input: the actual density (1930 to 3900 trees ha−1), 1400 (intensive management regime), and 2500 (conventional management regime) tallest trees ha−1. For each damage grade group, three different commercial thinning regimes were applied in the simulations: (i) thinning done when the relative stand density reaches 0.95 and is reduced to 0.7, (ii) thinning done when the relative stand density reaches 0.95 and is reduced to 0.60, and (iii) no thinning applied (Table S1). The analysis was applied for two final harvest scenarios: (i) when the cutting age (101 years) or (ii) target diameter (≥35 cm) was reached according to the current legislation in Latvia.
The volume of the logs was determined from the tree assortments in the stand according to the local equation [43]. Income from the harvest was calculated from the volume and prices (Central Statistical Bureau of Latvia 2018) of the assortments (Tables S2 and S3) [44]. To reflect the sensitivity to the situation in the timber market, income was estimated for three price levels––average, minimum, and maximum price (Table S3).
The financial value of the stands was calculated using the equivalent annual annuity (EAA) with 2%, 3%, and 4% interest rates [45]: where r is the interest rate (%), Rt is the net cash inflow-outflow during a single period t (EUR), and n is the number of five-year periods. Differences in EAA among groups with various damage grades were estimated using the analysis of variance and post-hoc Tukey’s test.

Simulation results indicated a significant (p < 0.01) effect of needle cast damage on EAA. At both the target age (101 years) and target DBH (≥35 cm), the seriously damaged (grades 4 to 5) group of Scots pine had a significantly lower EAA than the group of undamaged or slightly damaged (grades 1 to 2) trees, regardless of the density at the age of 17 years, commercial thinning regime, or price level (Figure 4, Table S4). For all damage levels, EAA at the final harvest according to the target DBH was more than double compared to the target age of 101 years. The target DBH for grades 1 to 2, 3, and 4 to 5 were reached on average at the age of 64, 77, and 97 years, respectively. The mean EAA reached 62.3 ± 18.7 EUR ha−1 for damage grades 1 to 2 at the final harvest time according to the target DBH, whereas it was lowest (0.8 ± 9.4 EUR ha−1) for trees with grades 4 to 5 at the conventional final harvest time (Figure 4).
In all simulated scenarios, the EAA reached the peak at the age of 35 to 45, tending to culminate earlier for groups with less needle cast damage and lower stand density at the age of 17 years (Figure 5). Regarding different commercial thinning regimes, the highest EAA for all groups was reached by applying a moderate commercial thinning regime, when relative density is reduced from 0.95 to 0.70 (Table S4). When applying a rate of 4%, the calculations for all price levels showed a similar tendency of EAA dynamics. The highest EAA during the simulated period was for the least damaged trees (grades 1 to 2) with a density of 1400 trees ha−1 at the age of 17 years, whereas the lowest EAA was estimated for seriously damaged trees in the actual density scenario (1930 trees ha−1), reaching positive values only at the maximum price level. For all needle cast damage levels, EAA was lower for the higher initial density at the age of 17 years compared to the intensive early management scenario (Table S4). Nevertheless, all scenarios applying a rate of 4% had a negative EAA at the minimum price level, whereas the scenarios with lower density at the age of 17 years for groups with grades 1 to 3 showed a stable tendency to maintain positive EAA during the simulation period for the average and maximum price levels.

Lophodermium needle cast negatively affects both tree height and DBH 11 years after a pathogen attack. In long-term simulations, L. seditiosum attacks at an early age had a substantial effect on EAA at the final harvest, which was by an average of 61.5 EUR ha−1 or 100% lower for severely damaged trees compared to the unaffected trees, applying a 2%, 3%, and 4% interest rate. Later EAA culmination for more damaged trees suggested a longer rotation time for more affected stands. However, more intensive early thinning may partly compensate for the reduction in growth and reduce the final harvest age, hence improving the financial outcome of already-affected stands. As indicated by the significant genetic effect on needle cast damage, the selection of more-resistant genotypes could potentially be included in Scots pine breeding activities. 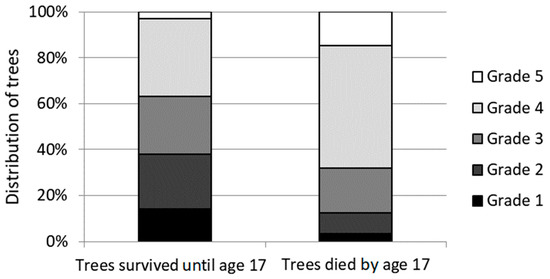 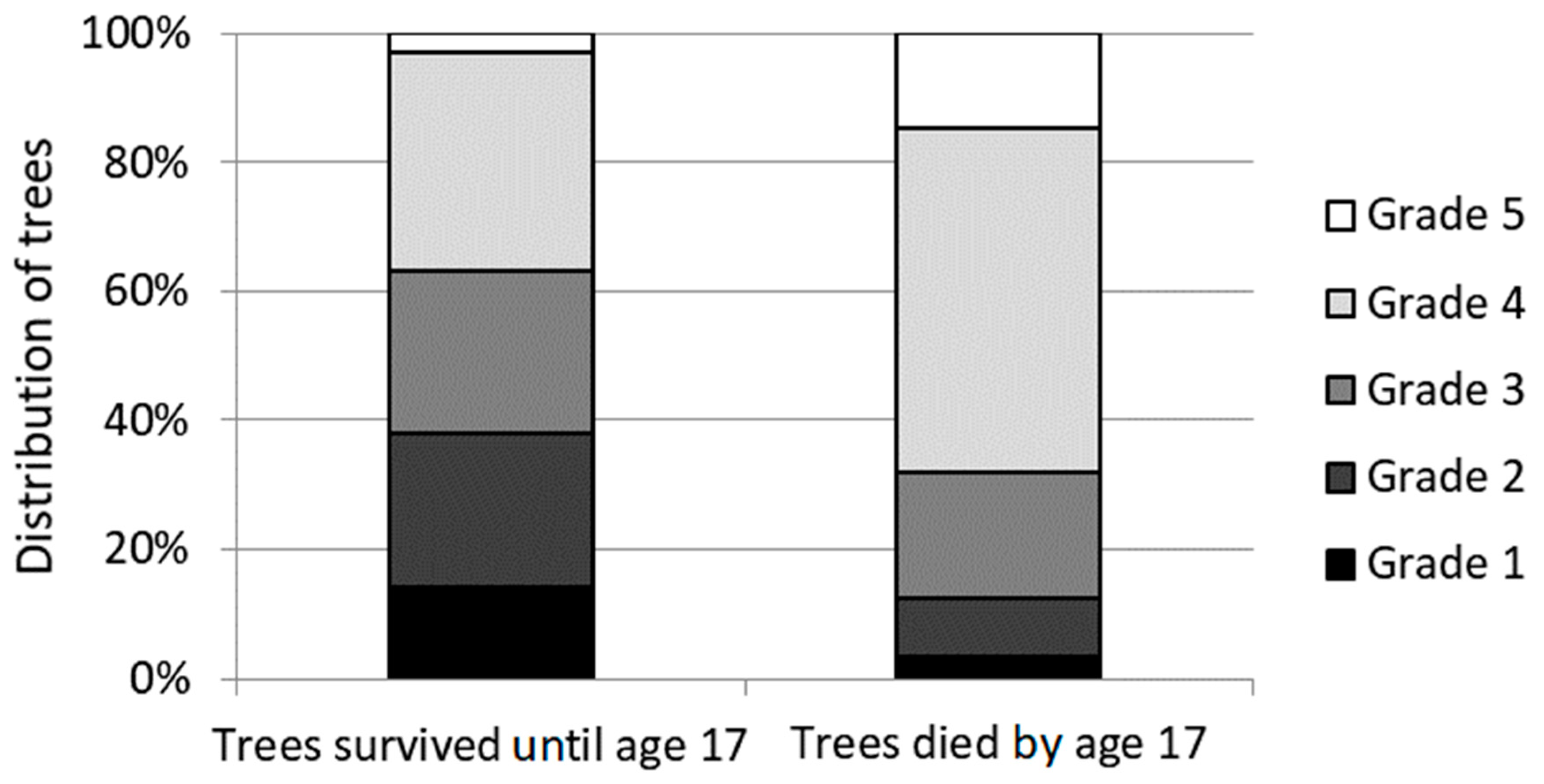 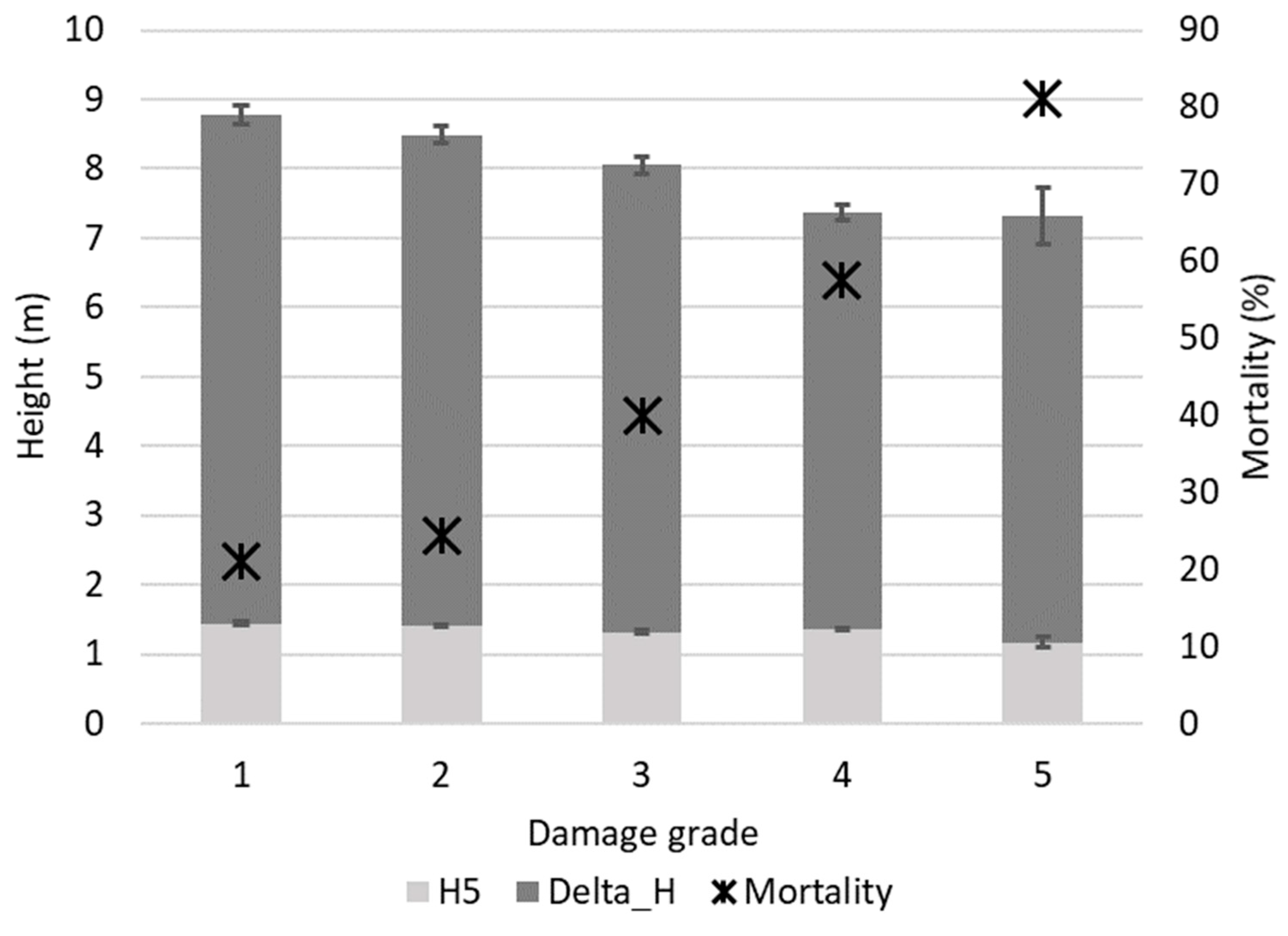 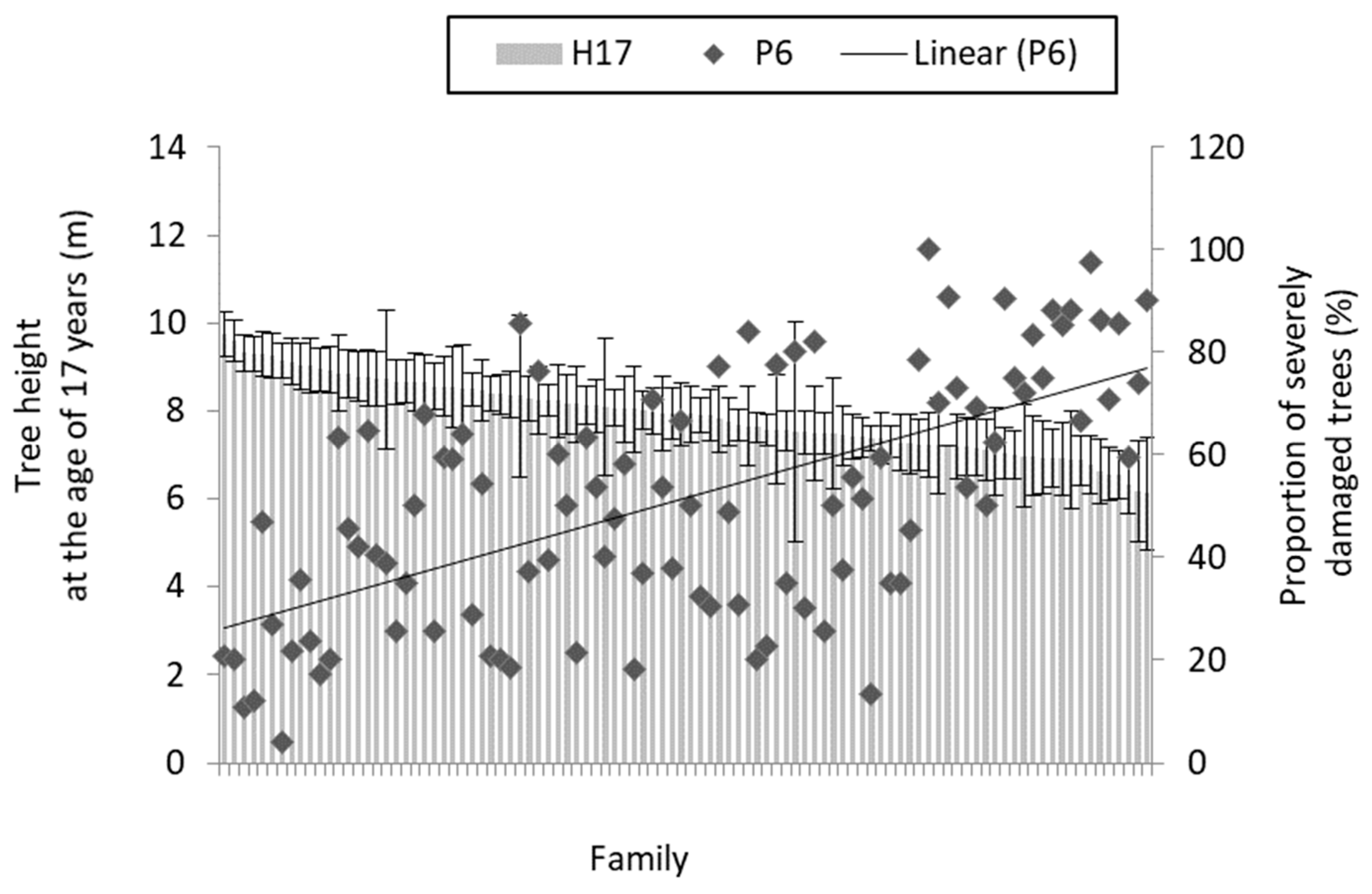 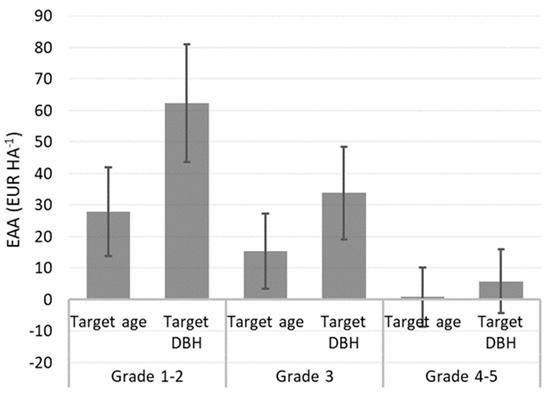 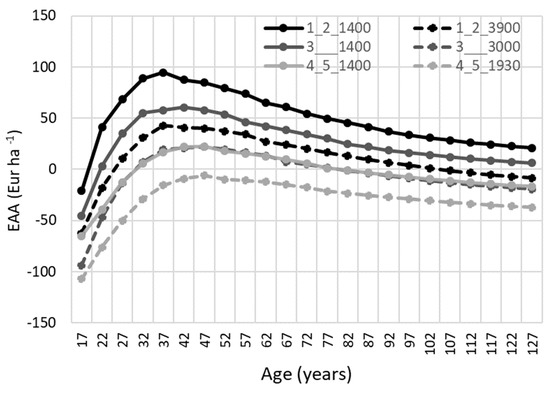