Throughfall (TF) makes up the majority of understory rainfall and thereby plays an important role in controlling the amount of water reaching the forest floor. TF under a single Quercus castaneifolia (C.A.Mey, chestnut-leaved oak) tree in Northern Iran was measured during the leafed and leafless periods. TF quantity under the Q. castaneifolia canopy made up 69.3% and 88.0% of gross rainfall during leafed and leafless periods, respectively. Phenoseason influenced TF distribution patterns as TF temporal patterns during the leafed period were slightly more stable than during the leafless periods. The minimum number of TF collectors needed to yield a representative mean TF with accepted errors of 10% at 95% confidence level was twenty-six and twelve TF collectors for leafed and leafless periods, respectively. We conclude that phenoseasonality significantly affects TF spatiotemporal variability and presented the required number of collectors necessary for sampling TF under an individual Q. castaneifolia tree. View Full-Text
Keywords: chestnut-leaved oak; throughfall; distribution pattern; phenoseason; sampling number chestnut-leaved oak; throughfall; distribution pattern; phenoseason; sampling number
►▼ Show Figures 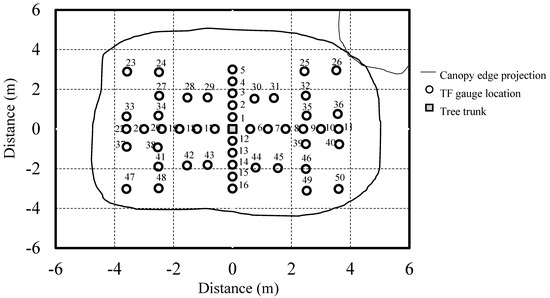