In recent decades, the climate has been warmer and drier [1], and the frequency and intensity of drought events have increased worldwide [2], most notably in northern China [3,4]. These changes affect inter-annual tree growth through the specific physiological thresholds of temperature and water availability [5,6,7], and they may have considerable effects on seasonal growth patterns of tree growth in arid areas [8,9]. However, the intra-annual variation in stem radial growth, which provides scientific support for forest management decision-making, remains less studied in arid areas of China.
In the arid northwestern region of China, the Qilian Mountains are a key nourishing and cherished water source area, feeding the Shiyanghe, Shulehe, and Heihe rivers [10]. Qinghai spruce is the dominant tree species of forests in this region, growing on shaded or semi-shaded slopes with elevations of 2500–3300 m [6]. Previous studies found that the daily and seasonal stem radial variations in individual Qinghai spruce sample trees and stem growth initiation were related to the soil temperatures at a depth of 40 cm and the mean air temperature [9,10]. In a natural forest, Qinghai spruce trees had obviously different diameters in the stand. To provide an accurate estimate of the intra-annual stem growth at the stand level, it is necessary to select sample trees with different diameters. We do not yet have a clear understanding of the variation in stem diameter growth among tree sizes and how environmental factors affect inter-annual variability in the seasonal pattern of stem diameter growth.
Consequently, we focused on (a) assessing the seasonal pattern of stem diameter growth and its variation among tree sizes, (b) how environmental factors affect seasonal growth parameters, and (c) which environmental factors control daily rate of stem diameter growth. To achieve these objectives, we selected a forest plot with 30- to 140-year-old Qinghai spruce in the Pailugou watershed, located in the Qilian Mountains, northwest China. Stem diameter changes, meteorological factors, soil moisture, and soil temperature were measured synchronously in the field from May to October of 2015 and 2016. Our work will contribute to improving the understanding of forest responses to environmental factors and to providing a basis for scientific prediction of trends in the future development of forest resources in arid regions.

The study was conducted in the Pailugou watershed (38°31′–38°33′ N, 100°16′–100°18′ E), with an area of 2.85 km2 and an elevation range of 2500–3800 m a.s.l.; the site is located in the middle part of the Qilian Mountains, in the upper Heihe River basin of arid northwest China (36°43′–39°36′ N, 97°25′–103°46′ E) (Figure 1). The climate is arid and semiarid continental. According to meteorological data from the Xishui station at an elevation of 2600 m, from 1994 to 2014, the mean annual air temperature was 1.6 °C. The mean annual precipitation was 435.5 mm, and approximately 84% of the rainfall occurred in the growing season (from May to September). The basin evaporation was 1081.7 mm. The mean annual sunshine duration was 1892.6 h·a−1. The mean annual relative humidity was 60% [11,12].
In the Pailugou watershed, along the elevation gradient, the vegetation types are mountain forest grasslands, subalpine shrub meadows, and alpine meadows, respectively [12]. Mountain forest is mainly distributed on shaded (north-facing) or semi-shaded (northwest- and northeast-facing) slopes at elevations from 2500 to 3300 m a.s.l., and the dominant tree species is Qinghai spruce (Picea crassifolia Kom.). Shrub community is mainly distributed on foot slope positions of shady slopes and areas above the tree line, and the main shrub species include Caragana jubata (Pall.) Poir., Berberis diaphana Maxim., and Potentilla fruticosa L. widely distributed at elevations <2900 m a.s.l., and Caragana jubata (Pall.) Poir., and Salix gilashanica C. Wang et P. Y. Fu distributed at elevations >3100 m a.s.l. Herbaceous vegetation consists mainly of Carex lanceolata Boott, Pedicularis spp. and Stipa capillata L.

Among the various sigmoidal models available to describe growth patterns, the Gompertz function is one of the most commonly applied models [9,16]. Due to its flexibility and asymmetrical shape [17], it has been used to describe tree growth patterns for entire tree lifespans [18] as well as patterns of seasonal growth [19,20,21]. To characterize the complete seasonal growth pattern (May–October) in the Qinghai spruce plot, the cumulative stem diameter growth curves were fitted with the Gompertz function defined as (Equation (3)): where Y is the accumulative stem diameter change, A is the upper asymptote, β is the x-axis placement parameter, κ is the rate of change parameter, and t is the time in days.

An automatic weather station (CR3000, Campbell Company, US) approximately 2 m in height was installed on an open area, approximately 100 m from the plot, to collect meteorological data from May to October 2015 and 2016. The meteorological factors included air temperature (HMP115A, T (°C)), relative humidity (HMP45A, Rh (%)), and precipitation (TE525MM, P (mm)). These measurements were conducted at 1-min intervals, and the mean 10-min values were stored in a data logger.
The vapor pressure deficit (VPD, kPa) was calculated from air temperature (T, °C) and relative humidity (Rh, %) using the Magnus equation (Equation (4)) [22]:
The volumetric soil moisture (Ms, m3·m−3) and the soil temperature (Ts, °C) for the root zone layers (the 0- to 10-cm, 10- to 20-cm, 20- to 40-cm, and 40- to 60-cm soil layers) were continuously monitored from June to October of 2015 and 2016 by using soil moisture and temperature sensors (5-TE, Decagon, United States). Up to 95% of the active roots were distributed within the upper 45 cm of the soil profile [9]. Therefore, the soil moisture and temperature of the 0- to 60-cm soil layer were used for analyses. Data were collected every 10 min by a data logger (EM50, Decagon, United States).

3.1. Environmental Characteristics during the Growing Season

3.2. Seasonal Pattern of Stem Diameter Growth and Its Variation among Tree Sizes

3.3. Monthly Mean Rate of Stem Diameter Growth and Its Variation among Tree Sizes

3.4. Effects of Environmental Factors on the Daily Mean Rate of Stem Diameter Growth

In related studies, tree growth initiation and cessation were different between measured trees, and the growth rate of stems with big diameters was relatively higher than that of those with small diameters. Big trees also had a longer growing season duration than small trees [9,23], which was probably related to the social position of the tree, competition, tree roots, and light conditions [23,38].
In this study, with the same growth environment in a year, there was the same growth pattern of stem diameter growth of ten Qinghai spruce trees in 2015 and 2016 (May–October). However, the value of parameters defining the seasonal growth pattern varied greatly among tree sizes (Figure 4), i.e., the timing of growth initiation of the big trees was earlier, the timing of growth cession was later, and they had a higher growth rate than that of the medium and small trees (Table 3 and Table 4). The average height of the big trees was high in the stand (Table 2), and they occupied a favorable social position in the forest and generally obtained more resources, especially light and soil moisture [11,39]. On the other hand, tree height and canopy width of the medium and small trees was lower in the stand (Table 2). The medium and small trees were located next to larger trees and their crowns were partly covered and obtained less light, and this may have induced a shorter growing season duration and a lower growth rate.
Additionally, stem diameter growth of the small trees began later and ended earlier than that of the big trees. The timing difference among tree sizes was large in 2016 with late initiation and cessation; growth initiation for small trees was 44 days later than that for big trees rather than the 15 days later in 2015, with early initiation and cessation (Figure 4c,d). This might indicate that the small trees were more sensitive to adversity (such as the low temperature or drought stress), and the adverse niche occupied by the small trees may have increased their sensitivity to adversity. Therefore, in natural forests, the difference in tree growth between measured trees is critical for forest management and we will further discuss this and its relationship with tree characteristics such as height, social position, and competition, in future studies.

In the future, global temperatures are likely to continue to increase and this will be accompanied by the expansion of drylands [46]. This trend may further impact the growth of dryland forests. Qinghai spruce is an important tree species for soil and water conservation in the Qilian Mountains. Based on the relationship between stem growth and environmental factors, temperature and drought affected the initiation, cessation and rate of stem growth, i.e., the initiation of stem growth began earlier as temperature increased and the cessation of stem growth ended earlier as the intensity of soil drought increased. Wang et al. [6] also found that tree growth of Qinghai spruce significantly decreased in the rapid warming period, and it was affected by drought in the Qilian Mountains. Therefore, to maintain tree growth, it is necessary to relieve drought stress by thinning forests to maintain stand density appropriately in arid regions.

We thank Ming Jin, Wenmao Jing, Weijun Zhao, Jian Ma, and other staff of the Academy of Water Resource Conservation Forests of Qilian Mountains in Gansu Province for their assistance in the field work. 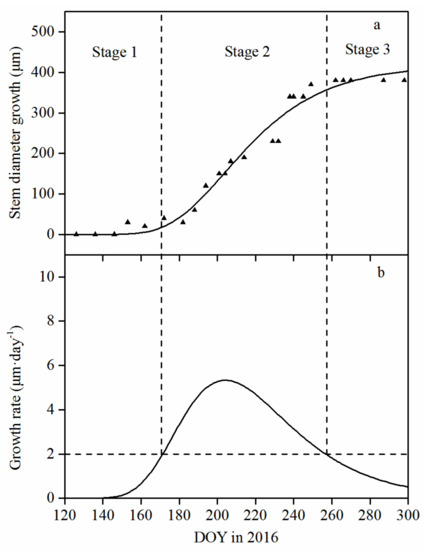 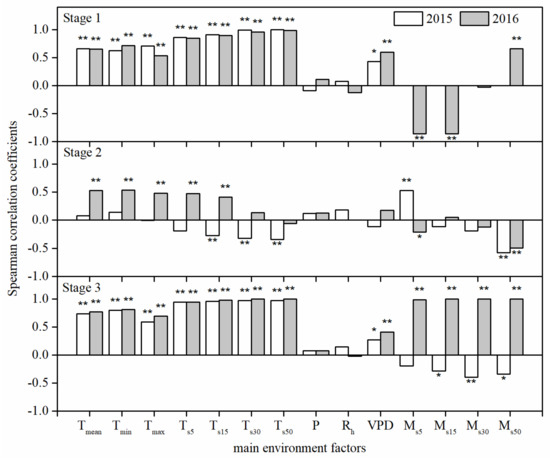