Combined Analyses of Phenotype, Genotype and Climate Implicate Local Adaptation as a Driver of Diversity in Eucalyptus microcarpa (Grey Box)

Trees are a keystone species in many ecosystems and a critical component of ecological restoration. Understanding their capacity to respond to climate change is essential for conserving biodiversity and determining appropriate restoration seed sources. Patterns of local adaptation to climate between populations within a species can inform such conservation decisions and are often investigated from either a quantitative trait or molecular genetic basis. Here, we present findings from a combined analysis of phenotype (quantitative genetic analysis), genotype (single nucleotide polymorphism (SNP) trait associations), and climate associations. We draw on the strength of this combined approach to investigate pre-existing climate adaptation and its genetic basis in Eucalyptus microcarpa (Grey box), an important tree for ecological restoration in south-eastern Australia. Phenotypic data from a 26-year-old provenance trial demonstrated significant genetic variation in growth and leaf traits at both the family and provenance levels. Growth traits were only associated with temperature, whilst leaf traits were associated with temperature, precipitation and aridity. Genotyping of 40 putatively adaptive SNPs from previous genome-wide analyses identified 9 SNPs associated with these traits. Drawing on previous SNP–climate association results, several associations were identified between all three comparisons of phenotype, genotype and climate. By combining phenotypic with genomic analyses, these results corroborate genomic findings and enhance understanding of climate adaptation in E. microcarpa. We discuss the implication of these results for conservation management and restoration under climate change. View Full-Text
Keywords: climate; quantitative trait; restoration; SNP-trait association; tree climate; quantitative trait; restoration; SNP-trait association; tree
►▼ Show Figures 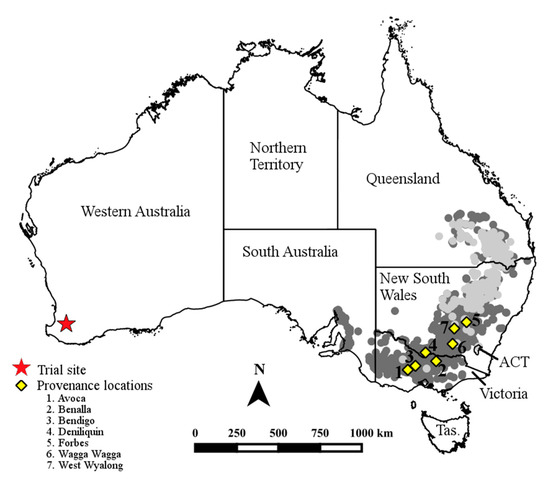