Fungi and Oomycetes in the Irrigation Water of Forest Nurseries

The aim of the present study was to assess fungal and oomycete communities in the irrigation water of forest nurseries, focusing on plant pathogens in the hope of getting a better understanding of potential pathogenic microorganisms and spreading routes in forest nurseries. The study sites were at Anykščiai, Dubrava, Kretinga and Trakai state forest nurseries in Lithuania. For the collection of microbial samples, at each nursery five 100-L water samples were collected from the irrigation ponds and filtered. Following DNA isolation from the irrigation water filtrate samples, these were individually amplified using ITS rDNA as a marker and subjected to PacBio high-throughput sequencing. Clustering in the SCATA pipeline and the taxonomic classification of 24,006 high-quality reads showed the presence of 1286 non-singleton taxa. Among those, 895 were representing fungi and oomycetes. The detected fungi were 57.3% Ascomycota, 38.1% Basidiomycota, 3.1% Chytridiomycota, 0.8% Mucoromycota and 0.7% Oomycota. The most common fungi were Malassezia restricta E. Guého, J. Guillot & Midgley (20.1% of all high-quality fungal sequences), Pezizella discreta (P. Karst.) Dennis (10.8%) and Epicoccum nigrum Link (4.9%). The most common oomycetes were Phytopythium cf. citrinum (B. Paul) Abad, de Cock, Bala, Robideau, Lodhi & Lévesque (0.4%), Phytophthora gallica T. Jung & J. Nechwatal (0.05%) and Peronospora sp. 4248_322 (0.05%). The results demonstrated that the irrigation water used by forest nurseries was inhabited by a species-rich but largely site-specific communities of fungi. Plant pathogens were relatively rare, but, under suitable conditions, these can develop rapidly, spread efficiently through the irrigation system and be a threat to the production of high-quality tree seedlings. View Full-Text
Keywords: fungal communities; oomycetes; irrigation water; seedlings pathogen; forest nurseries fungal communities; oomycetes; irrigation water; seedlings pathogen; forest nurseries
►▼ Show Figures 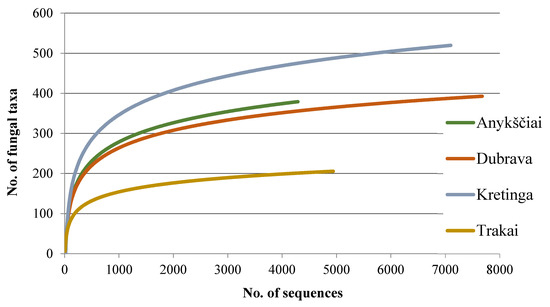