Multi-Factorial Load Analysis of Pine Sawlogs in Transport to Sawmill

This study analyzed the variability of truckloads of large-sized pine logs transported to a furniture manufacturing mill, depending on the origin of the timber, delivery period, length of the transported logs, volume of the load and its mass. It was assumed that the volume and mass of the transported timber load depends on the season of the year and the origin of the timber, which has a significant impact on the mass of one cubic meter of the load. The analysis of the wood origin parameters (location of its growth) took into account the type of forest habitat, soil type and stand abundance. The characteristics of the tree parameters from which the roundwood was obtained took into account age, diameter at breast height (DBH) and height of the stand. The origin of the timber was determined for 1063 timber loads from 40 forest districts transported over a 12 month period. We obtained an average timber load volume of 29.34 m3 which includes single shipments differing significantly in their volume of between 24.21 and 36.51 m3. The origin of the timber, habitat conditions and stand parameters of the harvesting site influence load mass and the mass of 1 m3 of load. The delivery date has an impact on the studied elements of the sawlogs load, with two similar periods—spring and summer. The volume of the transported timber is already at a stabilized level in accordance with legal regulations, which is no longer dependent on other factors and only on the accepted conversion factors for roundwood density and the mass of the empty vehicle set. This has not influenced a reduction in the mass of the transported timber. View Full-Text
Keywords: timber transport; timber load; roundwood; forest transportation; load mass; load density timber transport; timber load; roundwood; forest transportation; load mass; load density
►▼ Show Figures 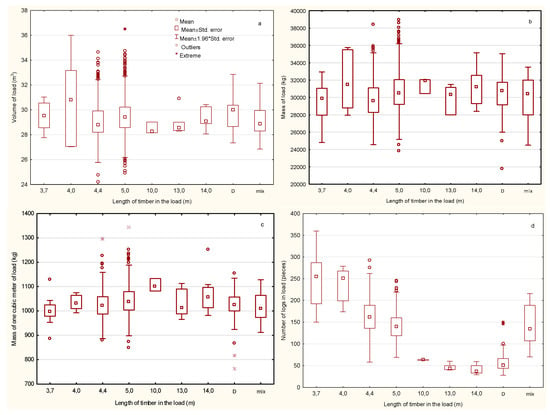