Male and Female Plants of Salix viminalis Perform Similarly to Flooding in Morphology, Anatomy, and Physiology
Previous Article in Journal

A catastrophic ice storm occurred in the spring of 2008, which severely destroyed nearly 13% of China’s forests; among them, the broad-leaved forest suffered the most extensive damage. In this study, allometric models of the evergreen broad-leaved forests damaged at different recovery stages after the disaster were established to estimate the aboveground biomass of damaged trees. Plant plots were established and surveyed in damaged forests to determine species composition and diameter distribution, and finally a sample scheme was formulated that contained 47 trees from 13 species. The destructive measurements of aboveground biomass of trees selected according to the scheme were conducted in 2008, 2010, 2012 and 2016, respectively. Undamaged trees in the same region were also selected to measure the biomass in 2010. Linear regression of logarithmic transformation of the power function form was performed using Diameter at Breast Height (DBH) as predictor to develop biomass allometric models. The results showed that the ice storm caused tree aboveground biomass loss, which caused different parameters of the tree biomass models at different recovery stages. The models have a high accuracy in predicting trunk and total aboveground biomass, with high determination coefficients (R2, 0.913~0.984, mean 0.957), and have a relatively low accuracy in predicting the biomass of branches and leaves (R2, 0.703~0.892, mean 0.784). The aboveground biomass reduced by 35.0% on average due to the ice storm, and recovered to the same level of undamaged trees in the same diameter 8 years after the disturbance. The branches and leaves recovered very fast, and the biomass of these parts exceeded that of the undamaged trees, reaching the same diameter 2 years after the disaster, indicating an over compensatory growth. The trees with a smaller diameter were mostly composed of middle and late succession species, and recovered faster than other species, indicating that the ice storm may alter the forest structure and accelerate community succession. The biomass allometric models built in this study, combined with forest inventory data, can estimate forest biomass loss and recovery after disturbance, and offer an important sense of the assessment of forest damage and the formulation of forest post-disaster management strategies. View Full-Text
Keywords: extreme climate events; natural disturbance; allometric equation; subtropical forest; compensatory growth; community succession extreme climate events; natural disturbance; allometric equation; subtropical forest; compensatory growth; community succession
►▼ Show Figures 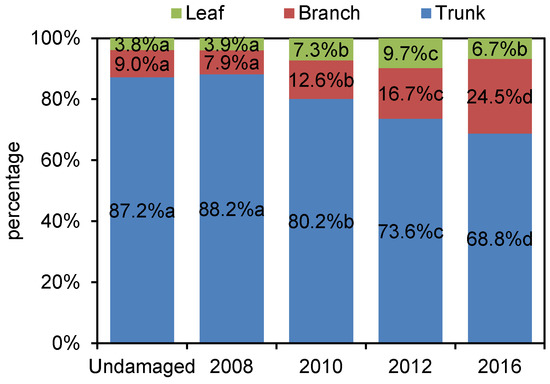