Background and Objectives: Studying responses in woody plants upon water limitation is gaining importance due to the predicted increase in frequency and intensity of droughts in Europe. We studied the variation in radial growth and in wood anatomical traits caused by water limited growth conditions in offspring from Quercus petraea (Matt.) Liebl., Q. robur L. and their morphological intermediates grown in the same environment. Materials and Methods: Cross sections were prepared from the stems of 210 three-year-old potted seedlings, comprising control plants and seedlings that experienced from late spring until early autumn of the first growing season two sequential periods of water with-holding each followed by plentiful re-watering. Pith radius, ring width of the three growing seasons and latewood vessel diameter in second and third growing season were measured. Presence of intra-annual density fluctuations, dendritic patterns of latewood vessels and the level of ring closure of earlywood vessels were observed. The traits were modelled to examine the explanatory power of the taxon of the mother tree and the drought treatment. Results: Most of the traits displayed significant differences between offspring from Q. petraea and Q. robur and offspring from the morphological intermediates behaved inconsistent among the traits. Most of the traits were significantly affected by the drought stress in the first growing season. Apart from radial growth, also latewood vessel size was reduced in the two growing seasons following the year in which drought was imposed on the seedlings, suggesting an adaptation to improve the tolerance to drought stress. We also found an indication for a compensation growth mechanism, counteracting the lost growing time during the drought stress, as the level of ring closure of the earlywood vessels in the year following the drought treatment was further advanced in the treated seedlings, an effect that disappeared in the subsequent year. Conclusion: Oaks exposed to drought adapt their growth and xylem structure to improve drought resistance. While youth growth of Q. robur is more competition-oriented, with a faster juvenile growth, Q. petraea seems to invest more in a precautious growth, being more prepared for stressful conditions. It is therefore possible that Q. robur seedlings may suffer more from intensified droughts than Q. petraea seedlings. View Full-Text
Keywords: water limitation; oak seedling; wood anatomy; earlywood vessel ring closure; dendritic vessel pattern; intra-annual density fluctuations; cross-sectioning; (general) linear mixed models water limitation; oak seedling; wood anatomy; earlywood vessel ring closure; dendritic vessel pattern; intra-annual density fluctuations; cross-sectioning; (general) linear mixed models
►▼ Show Figures 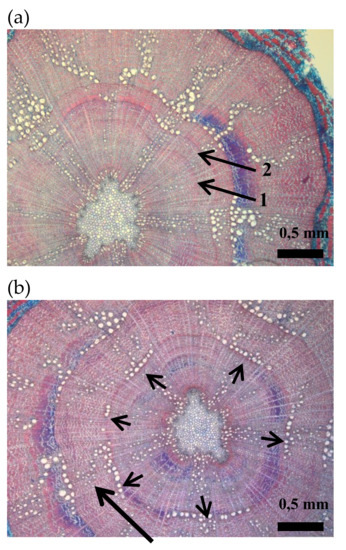