Pecan [Carya illinoinensis (Wangenh.) K. Koch] is an economically important nut tree and grafting is often used for clonal propagation of cultivars. However, there is a lack of research on the effects of rootstocks on scions, which are meaningful targets for directed breeding of pecan grafts. MicroRNAs (miRNAs) play an important role in many biological processes, but the mechanism underlying the involvement of miRNAs in grafting-conferred physiological changes is unclear. To identify the grafting-responsive miRNAs that may be involved in the regulation of growth in grafted pecan, six small RNA libraries were constructed from the phloem of two groups of grafts with significantly different growth performance on short and tall rootstocks. A total of 441 conserved miRNAs belonging to 42 miRNA families and 603 novel miRNAs were identified. Among the identified miRNAs, 24 (seven conserved and 17 novel) were significantly differentially expressed by the different grafts, implying that they might be responsive to grafting and potentially involved in the regulation of graft growth. Ninety-five target genes were predicted for the differentially expressed miRNAs; gene annotation was available for 33 of these. Analysis of their targets suggested that the miRNAs may regulate auxin transport, cell activity, and inorganic phosphate (Pi) acquisition, and thereby, mediate pecan graft growth. Use of the recently-published pecan genome enabled identification of a substantial population of miRNAs, which are now available for further research. We also identified the grafting-responsive miRNAs and their potential roles in pecan graft growth, providing a basis for research on long-distance regulation in grafted pecan. View Full-Text
Keywords: grafting; miRNA; pecan; growth grafting; miRNA; pecan; growth
►▼ Show Figures 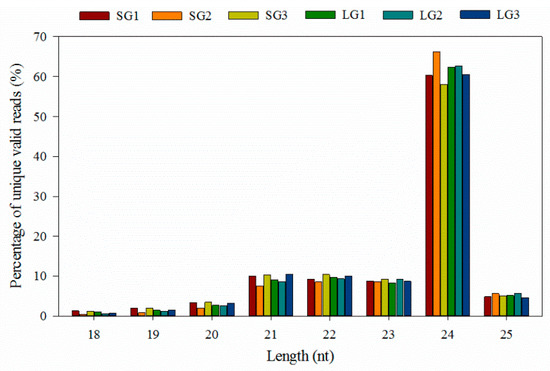