In eastern Canada, spruces (Picea spp.) and pines (Pinus spp.) are among the main commercial species being logged for their lumber or wood fiber. Annually, about 175 million seedlings are planted in areas totaling ~100,000 ha. Appropriate microsite selection is essential during reforestation operations, given that it can improve the chances of survival and initial growth of the seedlings. In fir (Abies spp.) and spruce forests of eastern Canada, the optimal characteristics of establishment microsites have yet to be identified; these would be determined by different physical and climatic variables operating at several scales. Our study determined the influence of climatic (regional-scale), edaphic (stand-scale), local (microsite-scale) and planting conditions on the establishment substrate and initial growth of black spruce (Picea mariana Britton, Sterns and Poggenb.) and jack pine (Pinus banksiana Lamb.). Substrate characterization and growth monitoring (three growing seasons) for the two species were conducted on 29 planted cutblocks that were distributed over an east–west climatic gradient (precipitation and temperature) in the balsam fir and black spruce–feather moss forests of Quebec (Canada). Linear mixed models and multivariate analyses (PCAs) determined the effects of climatic, edaphic and micro-environmental variables and their interactions on the establishment substrate and seedling initial growth. The predictive models explained, respectively, 61% and 75% of the growth variability of black spruce and jack pine. Successful establishment of black spruce and jack pine depended upon regional conditions of precipitations and temperature, as well as on their interactions with stand-scale edaphic variables (surface deposit, drainage and slope) and local variables (micro-environmental) at the microsite-scale (establishment substrate types and substrate temperature). Mineral, organo-mineral and organic establishment substrates exerted mixed effects on seedling growth according to regional precipitation and temperature conditions, as well as their interactions with edaphic and local variables at the stand and microsite-scales, respectively. View Full-Text
Keywords: climate; spruce stands; fir stands; seedling growth; soil; establishment substrate; multi-scale climate; spruce stands; fir stands; seedling growth; soil; establishment substrate; multi-scale
►▼ Show Figures 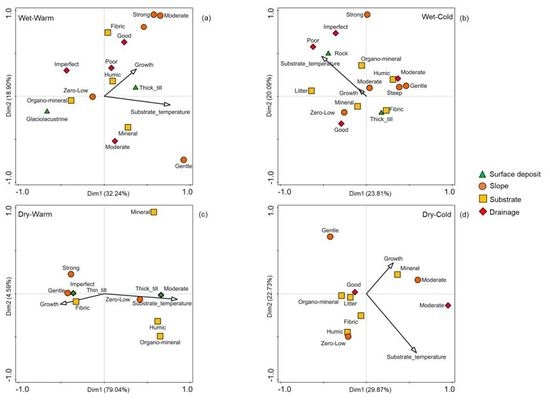