This study explored the underground interactions between black spruce and trembling aspen in pure and mixed stands to understand how their soil resource use help these species coexist in the boreal mixedwoods of Western Quebec. We analyzed species-specific fine root foraging strategies (root biomass and root tissue density) along three soil layers (organic, top 0–15 cm, and bottom 15–30 cm mineral soil), using 180 soil cores. We collected cores in three sites, each containing three 20 × 50 m2 plots of pure spruce, pure aspen, and mixed spruce and aspen stands. Spruce had a shallow rooting, whereas aspen had a deep rooting in both types of stands. Compared to pure spruce stands, spruce had a lower fine root biomass (FRB) and a higher root tissue density (RTD) in the organic layer of mixed stands. Both patterns were indicative of spruce’s more intensive resource use strategy and competitive advantage over aspen in that layer. Aspen FRB in the organic soil did not differ significantly between pure and mixed stands, but increased in the mineral soil of mixed stands. Since we did not observe a significant difference in the nutrient content of the mineral soil layer between pure aspen and mixed stands, we concluded that aspen may experience competitive exclusion in the organic layer by spruce. Aspen exhibited an extensive nutrient uptake strategy in the organic layer of mixed stands: higher FRB and lower RTD than spruce. In mixed stands, the differences in aspen rooting patterns between the organic and mineral layers suggested the use of contrasting nutrient uptake strategies along the soil profile. We speculate that the stronger spatial separation of the roots of spruce and aspen in mixed stands likely contribute to a higher partitioning of their nutrient uptake along the soil profile. These results indicate the competitive exclusion of aspen by spruce in boreal mixedwoods, which likely occurs in the soil organic layer. View Full-Text
Keywords: diversity-productivity relationships; nutrient uptake strategy; fine root biomass; root tissue density; stand compositional diversity diversity-productivity relationships; nutrient uptake strategy; fine root biomass; root tissue density; stand compositional diversity
►▼ Show Figures 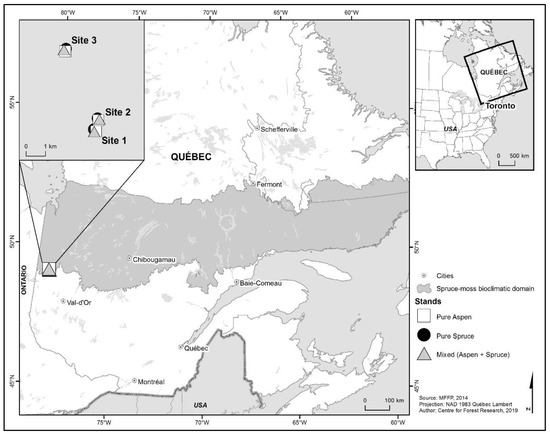