Results Based Payments for REDD+ under the Green Climate Fund: Lessons Learned on Social, Environmental and Governance Safeguards

Uranium Vertical and Lateral Distribution in a German Forested Catchment

The natural measurements of uranium (U) are important for establishing natural baseline levels of U in soil. The relations between U and other elements are important to determine the extent of geological origin of soil U. The present study was aimed at providing a three-dimensional view of soil U distribution in a forested catchment (ca. 38.5 ha) in western Germany. The evaluated data, containing 155 sampled points, each with four major soil horizons (L/Of, Oh, A, and B), were collected from two existing datasets. The vertical U distribution, the lateral pattern of U in the catchment, and the occurrence of correlations between U and three groups of elements (nutrient elements, heavy metals, and rare earth elements) were examined. The results showed the median U concentration increased sevenfold from the top horizon L/Of (0.14 mg kg−1) to the B horizon (1.01 mg kg−1), suggesting a geogenic origin of soil U. Overall, soil U concentration was found to be negatively correlated with some plant macronutrients (C, N, K, S, Ca) but positively with others (P, Mg, Cu, Zn, Fe, Mn, Mo). The negative correlations between U and some macronutrients indicated a limited accumulation of plant-derived U in soil, possibly due to low phytoavailability of U. Positive correlations were also found between U concentration and heavy metals (Cr, Co, Ni, Ga, As, Cd, Hg, Pb) or rare earth elements, which further pointed to a geogenic origin of soil U in this forested catchment. View Full-Text
Keywords: forest soil; uranium; correlation; distribution forest soil; uranium; correlation; distribution
►▼ Show Figures 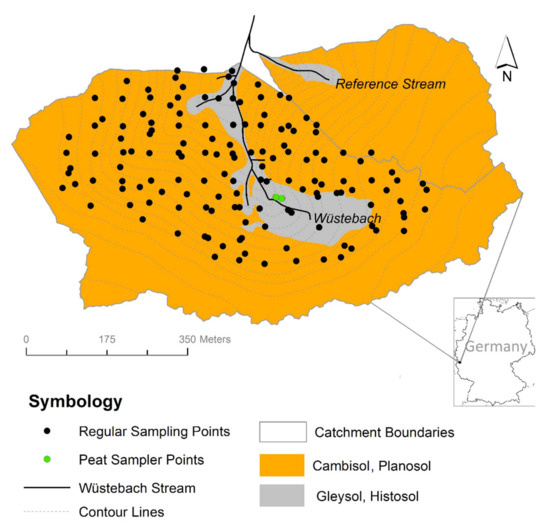