Wood vs. Canopy Allocation of Aboveground Net Primary Productivity in a Mediterranean Forest during 21 Years of Experimental Rainfall Exclusion

Survival in variable conditions of wind exposure depends on the strategy of trees in adapting to environmental constraints. There are many studies investigating the effect of wind on the adaptation of trees, but little attention is paid to the properties of the wood, particularly within-stem variability. In the present work, an analysis was made of within-stem variability of the density and mechanical properties of Scots pine wood from parts of stands with different wind exposure (stand edge, forest interior). The research was carried out in north-western Poland, in seven selected pine stands (without other species in the canopy) aged from 82 to 87 years. In each stand, three trial plots were marked, each at a different distance from the edge of the stand. The first plot was immediately adjacent to the edge (0–20 m), the second was at a distance of 30–50 m, and the third was at a distance of 60–80 m. Generally, wind exposure, defined by the distance from the windward edge, did not significantly affect the tree morphology and wood properties. A statistically significant difference was found only for the modulus of elasticity (MOE), between stand edge and forest interior. Trees growing at a distance from the stand edge compensate for their greater stem slenderness with higher elasticity. A certain growth response to wind loads is also represented by the within-stem variability of wood. We found that within-stem variability of wood at the stand edge is higher than in the forest interior. At various points along the stem, the wood density and strength were generally higher on the eastern radius (on the leeward side of the stem). Different wind resistance requirements at the stand edge and in the interior lead to combinations of tree architecture and wood properties that enable the best resistance to wind loads. View Full-Text
Keywords: growth; adaptation; tree stability; compressive strength longitudinal to grain; modulus of rupture; modulus of elasticity growth; adaptation; tree stability; compressive strength longitudinal to grain; modulus of rupture; modulus of elasticity
►▼ Show Figures 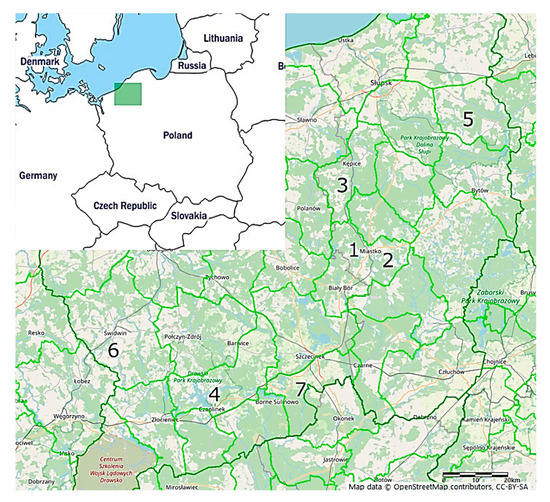