Absorptive and transport fine roots (diameter ≤ 2 mm) differ greatly in anatomy, morphology, and physiology, as well as their responses to environmental changes. However, it is still not well understood how their functional traits and biomass repartition respond to resource variability associated with increasing soil depth. Herein, we sampled the first five order roots of three hardwoods, i.e., Juglans mandshurica Maxim., Fraxinus mandshurica Rupr., and Phellodendron amurense Rupr. at surface (0–10 cm) and subsurface (20–30 cm) soil layers, respectively, and measured root biomass, anatomy, morphology, chemistry, and physiology at the branch-order level. Based on the anatomical characteristics, absorptive and transport fine roots were identified within each order, and their amounts and functional trait plasticity to soil depth were examined. The results showed that across soil layers, the first three order roots were mainly absorptive roots, while the fourth- and fifth-order roots were transport ones. From surface to subsurface soil layers, both the number and biomass proportion of absorptive fine roots decreased but those of transport fine roots increased. Transport fine root traits were more plastic to soil depth than absorptive ones, especially for the conduit-related traits. Absorptive fine roots in surface soil generally had stronger potential for resource acquisition than those in deeper soil, as indicated by their longer specific root length and greater root branching density. In comparison, transport fine roots in deeper soil were generally enhanced in their transportation function, with wider stele and higher hydraulic conductivity. Our findings suggest that functional specialization via multi-trait plasticity and coordination in both absorptive and transport fine roots along the soil depth would benefit the efficient soil resource exploitation of trees in forest ecosystems. View Full-Text
Keywords: absorptive roots; transport roots; functional traits; soil depth; plasticity absorptive roots; transport roots; functional traits; soil depth; plasticity
►▼ Show Figures 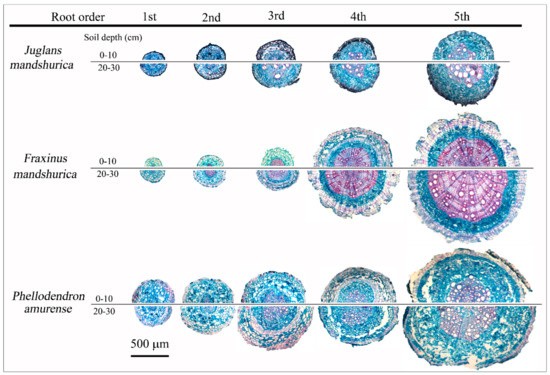