Treeline Research—From the Roots of the Past to Present Time. A Review

Elevational and polar treelines have been studied for more than two centuries. The aim of the present article is to highlight in retrospect the scope of treeline research, scientific approaches and hypotheses on treeline causation, its spatial structures and temporal change. Systematic treeline research dates back to the end of the 19th century. The abundance of global, regional, and local studies has provided a complex picture of the great variety and heterogeneity of both altitudinal and polar treelines. Modern treeline research started in the 1930s, with experimental field and laboratory studies on the trees’ physiological response to the treeline environment. During the following decades, researchers’ interest increasingly focused on the altitudinal and polar treeline dynamics to climate warming since the Little Ice Age. Since the 1970s interest in treeline dynamics again increased and has considerably intensified from the 1990s to today. At the same time, remote sensing techniques and GIS application have essentially supported previous analyses of treeline spatial patterns and temporal variation. Simultaneously, the modelling of treeline has been rapidly increasing, often related to the current treeline shift and and its implications for biodiversity, and the ecosystem function and services of high-elevation forests. It appears, that many seemingly ‘new ideas’ already originated many decades ago and just confirm what has been known for a long time. Suggestions for further research are outlined. View Full-Text
Keywords: history of treeline research; elevational treeline; polar treeline; treeline dynamics history of treeline research; elevational treeline; polar treeline; treeline dynamics
►▼ Show Figures 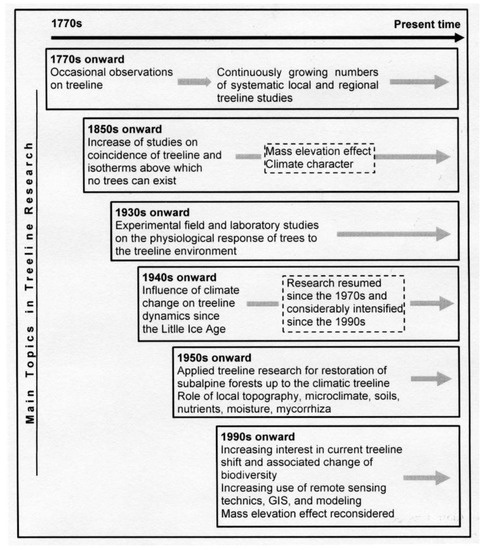