The emerald ash borer (Agrilus planipennis Fairmaire; EAB) is an invasive insect that causes mortality of trees in the genus Fraxinus, creating canopy gaps that may facilitate invasion by exotic plants. Planting native tree seedlings under EAB-infested Fraxinus may accelerate succession and preclude invasive plant expansion; however, the effectiveness of this approach has not been experimentally tested. We assessed understory seedling planting of Quercus rubra, Carya laciniosa, and Juglans cinerea in EAB-infested forests, where the invasive shrub Lonicera maackii (Amur honeysuckle) was removed. We tested whether the use of plastic tree shelters (“tree tubes”) or planting season (fall versus spring) contributed to the success of the reforestation plan by measuring growth rates (cm/yr) and survivorship two and seven years after planting. After seven years, seedling survivorship was <25% for all species and planting techniques. Quercus rubra exhibited poor survivorship with one seedling surviving to the conclusion of the experiment. Juglans cinerea and C. laciniosa had higher survivability and growth rates than did Q. rubra after two and seven years. Effects of tree tubes were weak and temporary. After 2 years, Q. rubra seedling survivorship was higher in tree tubes; however, by the end of the experiment 29 of the 30 Q. rubra seedlings in tree tubes had died. Juglans cinerea seedlings grew faster when planted in the fall compared to the spring, but overall survivorship of these seedlings was unaffected by planting season. Neither the use of tree shelters nor the planting season contributed to the growth or survival of C. laciniosa seedlings. In summary, our results indicate that seedling planting of Carya and Juglans may be a useful way to increase biodiversity in regenerating forests; however, the resource-expensive processes of over-wintering seedlings and using tree shelters may not increase the success of reforestation efforts. View Full-Text
Keywords: Lonicera maackii; Agrilus planipennis; invasive species; reforestation Lonicera maackii; Agrilus planipennis; invasive species; reforestation
►▼ Show Figures 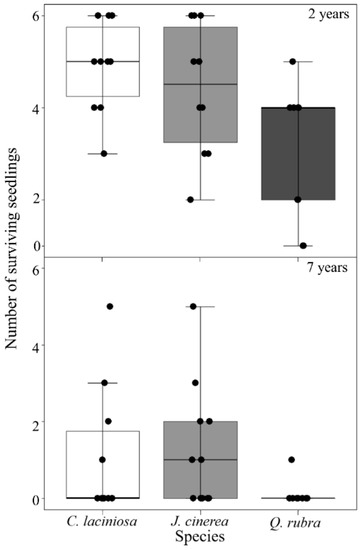