Occurrence, Seasonal Abundance, and Superparasitism of Ooencyrtus kuvanae (Hymenoptera: Encyrtidae) as an Egg Parasitoid of the Spotted Lanternfly (Lycorma delicatula) in North America

Pleurotus species are said to be nematophagous because they paralyze and consume some bacterial-feeding nematodes. It has never been clear whether that means all nematodes. Here we tested thirteen bacterial-feeding nematode species: seven of family Rhabditidae, three of Cephalobidae (one with three populations), two of Panagrolaimidae, and one of Diplogastridae. Nematodes interacted on water agar with toxin-producing isolates of Pleurotus pulmonarius (Fr.) Quél. and Pleurotus ostreatus (Jacq.) P. Kumm. Of the thirteen species, nine were susceptible to P. pulmonarius (all individuals were paralyzed) but four (four populations of two cephalobid species, one rhabditid, and one panagrolaimid) survived exposure to P. pulmonarius. The resistant four species not only survived but multiplied their numbers by consuming P. pulmonarius. A similar trend was observed with nematodes interacting with P. ostreatus; however, six species were resistant to P. ostreatus. Interestingly, four of these six species were susceptible to P. pulmonarius, and interactions overall were differential. Pleurotus species are nematophagous toward some nematodes but are also consumed by others in three of the four families assayed. Species-specific interactions point to the need for studies of the host ranges of both “nematophagous” fungi and “fungivorous” nematodes, especially if they are to be used for biological control. View Full-Text
Keywords: host range; soil; Rhabditidae; Cephalobidae; toxin; fungivorous host range; soil; Rhabditidae; Cephalobidae; toxin; fungivorous
►▼ Show Figures 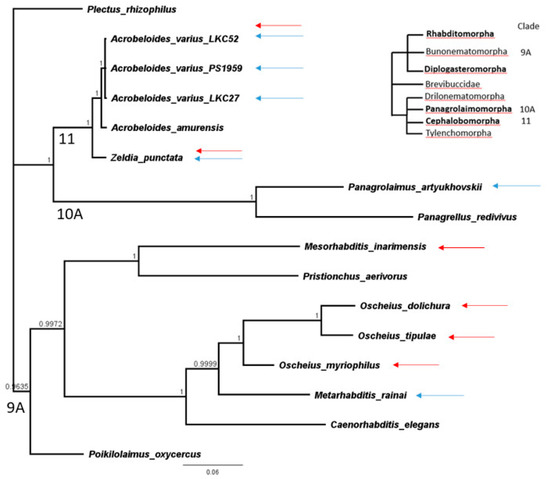