The study area is located in northeastern Alberta, Canada centered around the municipality of Fort McMurray (Figure 1) where treed peatlands are common. Elevation ranges from 279 to 741 m. Sites consisted of treed peatlands across four ecosite types (poor mesic, poor fens, rich fens, and bogs; Figure 2) with ecosite classification defined by the Alberta Biodiversity Monitoring Institute Terrestrial Field Data Collection Protocols using dominant vegetative community (or that of pre-disturbance), soil characteristics, soil nutrients, and moisture [33]. Dominant tree species depended on ecosite type and conditions, but typically black spruce was the dominant species in poor mesic, bog, poor fens, and occasionally in rich fens; while tamarack (Larix laricina (Du Roi) K. Koch) was usually the dominant species in rich fens and co-dominant in poor fens. In some circumstances, aspen (Populus tremuloides Michx.) and/or jack pine (Pinus banksiana Lamb.) were present in poor mesic sites, but normally were not dominant. Sample sites included mature peatland forests, as well as areas of five separate recent wildfires occurring within the region including the Mariana Lake Fire (1995), a fire in 1999 and in 2009, the Richardson Fire of 2011, and the Horse River (Fort McMurray) Fire of 2016 (Figure 1).

Field data were collected between May 18 and July 25, 2017. Sample sites (102 sites; 204 paired plots) were selected (stratified) across a range of five fire burn years (1995, 1999, 2009, 2011, and 2016) (Figure 1) and from low to high fire severity. Of the 102 sites and 204 plots sampled, 42 sites (84 plots) were unburned sites, 12 sites were sampled from the 1995 fire, 10 from the 1999 fire, 14 from the 2009 fire, 12 from the 2011 fire, and 12 from the 2016 fire (Table 1). Fire severity was defined using percent overstory tree mortality with sites used only when fire severity was similar for the seismic line and adjacent forest. We also examined ecosite characteristics as they may create differences in microtopography. Ecosite types included: 15 bogs (6 unburned and 9 burned), 46 poor fens (19 unburned and 27 burned), 18 rich fens (8 unburned and 10 burned), and 23 poor mesic sites (9 unburned and 14 burned) (Table 1). This composition of ecosites reflects the distribution found in northeastern Alberta with, for instance, bogs being less common. All plots were at least 60 meters from other forest types, forest edges, or other seismic lines. Sites were at least 400 m apart, to avoid pseudo-replication, with a preference to have sites on separate seismic lines and only on the same line if in a different ecosite. Transects were 20 m in length down the center of the seismic line with an adjacent stand transect running parallel, 25 meters into the forest (randomized for the left or right side of the seismic line).

Microtopographic complexity and depression depth were measured using a ZIPLEVEL PRO-2000 (Technidea® Corporation, Escondido, CA, USA) High Precision Hydrostatic Altimeter (0.127 cm accuracy). Seismic line depression was assessed via perpendicular measures across the seismic line obtained at 0, 10, and 20 m points of the transect (Figure 3). Eleven points were taken at each distance with the adjacent measurements being 0.25, 0.5, and 0.75 m from the outer edge of the seismic line into both left and right sides of the adjacent forests (edges), with five points measured in the middle of the seismic line (seismic line width varied from 3 to 14 m) at increments of 0.25 m (Figure 3). Depression depth was calculated as the average difference between the central points to the forest edges. Microtopographic complexity was measured along the center 20 m of each seismic line and its paired adjacent forest control (25 m from seismic line) at intervals of 0.25 m (n = 81 observations per transect). Points were measured as elevations or depressions relative to an initially tared zero value. These data were later converted to mean absolute residual deviation of microtopography as a measure of variation (higher values meaning more complexity and vice versa). This method accounts for natural slopes in terrain along the seismic line that would not be accounted for with mean absolute deviation measures. 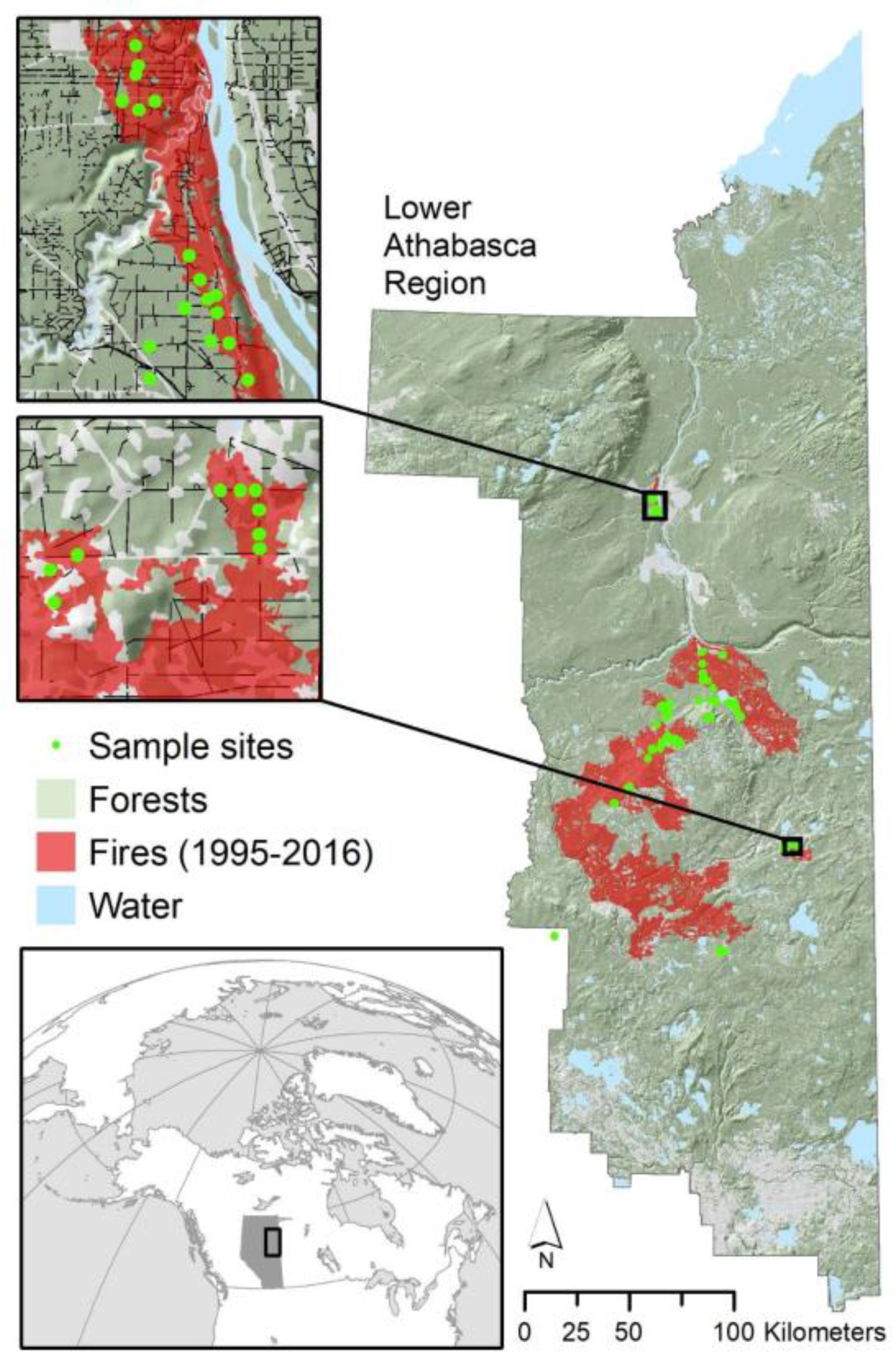 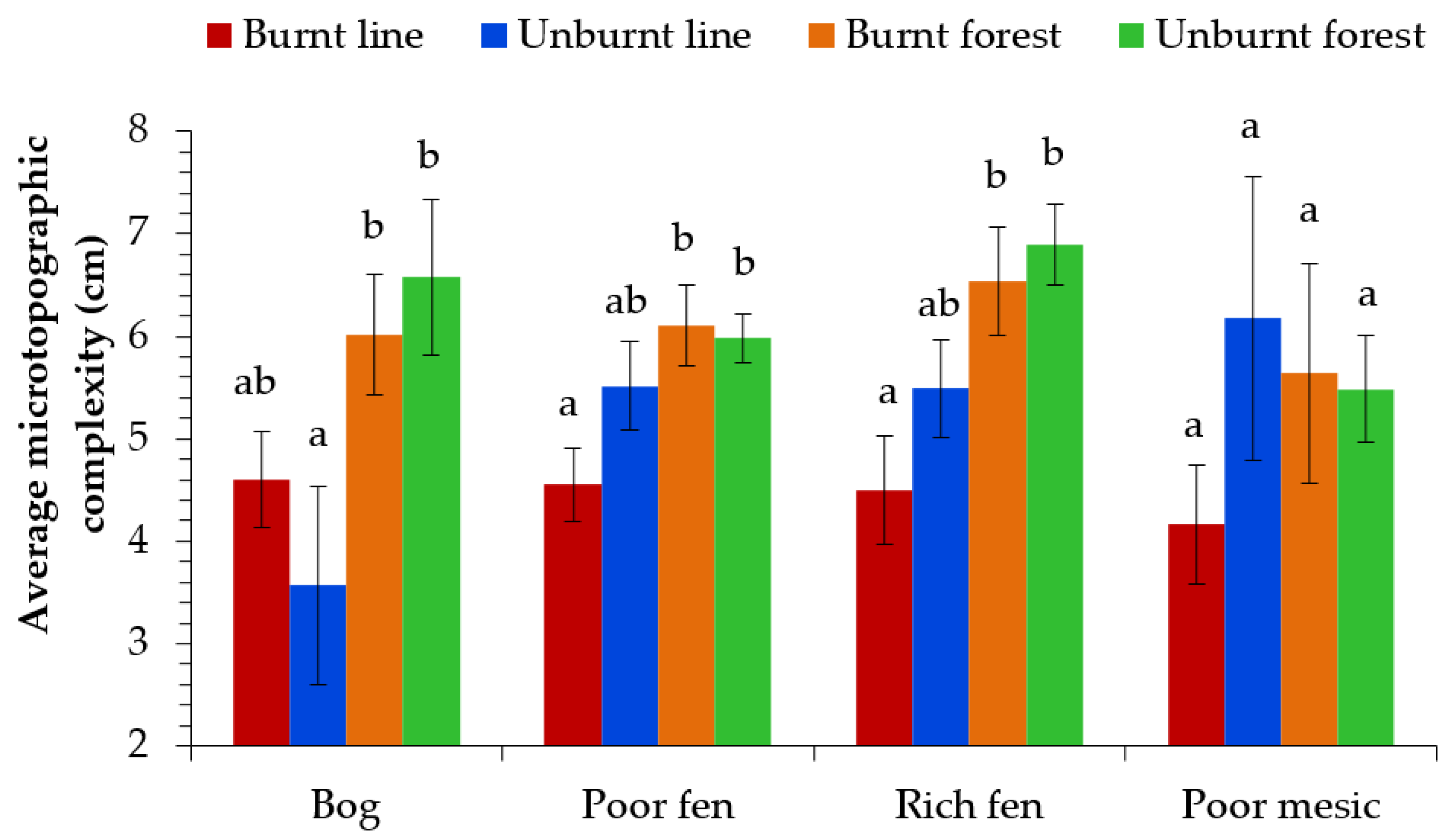