Oaks (Quercus) are a dominant forest species throughout much of the eastern United States. However, oak regeneration failure due to a myriad of issues (e.g., suppression of natural fire, excess nitrogen deposition, pressure from herbivore activity) is leading to a decline in oak dominance. This change may alter forest hydrology and nutrients through variation in species characteristics. Throughfall (TF) and stemflow (SF) quantity and chemistry were sampled during storm events under oak and non-oak (hickory, Carya) species to quantify differences in canopy-derived water and nutrients from an upland oak-hickory forest in Mississippi. Stemflow partitioning was 86% higher in hickory species compared to oak species (394.50 L m−2; p < 0.001). Across all species, dissolved organic carbon (DOC) was 1.5 times greater in throughfall (p = 0.024) and 8.7 times greater in stemflow (p < 0.001) compared to rainfall. White oak DOC concentrations (TF: 22.8 ± 5.5 mg L−1; SF: 75.1 ± 9.5 mg L−1) were greater compared to hickory species (TF: 21.0 ± 18.3 mg L−1; SF: 34.5 ± 21.0 mg L−1) (p = 0.048). Results show that while smoother-barked hickory species generate more stemflow volume, rougher-barked oak species generate stemflow that is more enriched in nutrients, which is a function of the canopy characteristics of each species. Within a single stand, this study demonstrates how variable water and nutrient fluxes may be and provide insights into species-level variability in oak-hickory forest types that may be undergoing compositional changes. View Full-Text
Keywords: forest hydrology; throughfall; stemflow; Quercus forest hydrology; throughfall; stemflow; Quercus
►▼ Show Figures 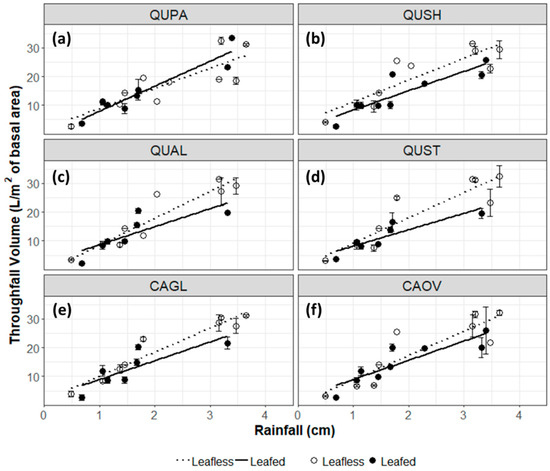