Abiotic and Biotic Disturbances Affecting Forest Health in Poland over the Past 30 Years: Impacts of Climate and Forest Management
Next Article in Special Issue

Some Lessons Learned on Early Survival and Growth of Containerized, Locally-Sourced Ponderosa Pine Seedlings in the Davis Mountains of Western Texas, US
Previous Article in Journal

Herbaceous vegetation is a major source of interference with the regeneration of woody species. This is particularly the case after forest fires, as a dense herbaceous layer usually regenerates naturally. Although the competitive effect of the herbaceous vegetation upon tree seedlings has been widely studied, there are still gaps in knowledge for management related to the effect of tree seedling age and size on the outcome of the interaction. In this study, we seek to determine the response of maritime pine (Pinus pinaster Aiton) seedlings to herbaceous competition at two different seedling ages. For that, two treatments of herbaceous competition were implemented, namely unweeded (no action around pine seedlings) and weeded (herbaceous cover removed around pine seedlings). Treatments were conducted twice (2 and 4 years after the fire), and we monitored seedling survival and growth at the end of each growing season. The treatments were implemented across three adjacent landscape units that differed in the management of burned wood and that are representative of common post-fire scenarios: no intervention, salvage logging, and an intermediate degree of intervention. Weeding increased seedling survival from 44.7% to 67.8% when seedlings were 2 years old, but had no effect for four-year-old seedlings, which showed 99% survival. Seedling growth also increased in the weeding treatment, but only slightly. Moreover, growth (and survival for two-year-old seedlings) was strongly correlated with initial seedling size, particularly in the case of two-year-old seedlings. Initial pine seedling height was strongly and positively correlated with the height of the herbaceous layer, supporting the existence of microsite features that promote plant growth above competitive effects. The results support that management actions conducive to foster post-fire pine forest restoration in this Mediterranean ecosystem should reduce herbaceous competition at early stages after fire (second or third year) and focus on larger seedlings. View Full-Text
Keywords: burnt wood management; wildfire management; Mediterranean-type ecosystems; plant demography; plant competition; post-fire regeneration; salvage logging burnt wood management; wildfire management; Mediterranean-type ecosystems; plant demography; plant competition; post-fire regeneration; salvage logging
►▼ Show Figures 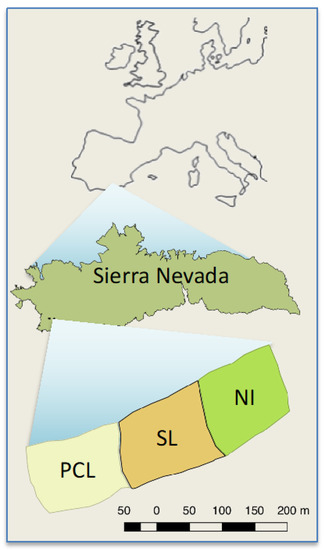