RAD-Seq Data Point to a Distinct Split in Liriodendron (Magnoliaceae) and Obvious East–West Genetic Divergence in L. chinense
Next Article in Special Issue

The small cypress bark beetle Phloeosinus aubei is considered an invasive pest in several central European countries, and we have determined its current distribution on common juniper trees (Juniperus communis) in the Czech Republic. The results indicated that P. aubei is widely distributed in the country but is more common in the east than in the west. The beetle was mainly detected on older, damaged trees and on stems with diameters > 3 cm. The apparently widespread and abundant populations of P. aubei could explain infestations of the beetle on Thuja spp. and Juniperus spp. in gardens (three confirmed cases during the last 10 years). We consider P. aubei to be a potential pest on older, naturally occurring J. communis in protected areas where its population density could increase on weakened and damaged trees. We suggest that P. aubei can be monitored via simple inspection of dying and dead J. communis trees in the field. View Full-Text
Keywords: scolytid; small cypress bark beetle; Juniperus communis; longitude; monitoring; biological invasions scolytid; small cypress bark beetle; Juniperus communis; longitude; monitoring; biological invasions
►▼ Show Figures 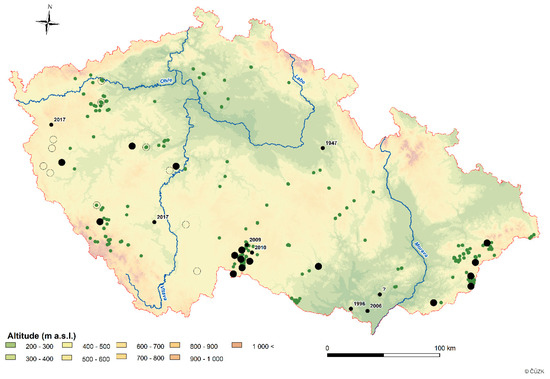