This paper studies the journey planning problem in the context of transit networks. Given the timetable of a schedule-based transportation system (consisting, e.g., of trains, buses, etc.), the problem seeks journeys optimizing some criteria. Specifically, it seeks to answer natural queries such as, for example, “find a journey starting from a source stop and arriving at a target stop as early as possible”. The fastest approach for answering to these queries, yielding the smallest average query time even on very large networks, is the Public Transit Labeling framework, proposed for the first time in Delling et al., SEA 2015. This method combines three main ingredients: (i) a graph-based representation of the schedule of the transit network; (ii) a labeling of such graph encoding its transitive closure (computed via a time-consuming pre-processing); (iii) an efficient query algorithm exploiting both (i) and (ii) to answer quickly to queries of interest at runtime. Unfortunately, while transit networks’ timetables are inherently dynamic (they are often subject to delays or disruptions), ptl is not natively designed to handle updates in the schedule—even after a single change, precomputed data may become outdated and queries can return incorrect results. This is a major limitation, especially when dealing with massively sized inputs (e.g., metropolitan or continental sized networks), as recomputing the labeling from scratch, after each change, yields unsustainable time overheads that are not compatible with interactive applications. In this work, we introduce a new framework that extends ptl to function in delay-prone transit networks. In particular, we provide a new set of algorithms able to update both the graph and the precomputed labeling whenever a delay affects the network, without performing any recomputation from scratch. We demonstrate the effectiveness of our solution through an extensive experimental evaluation conducted on real-world networks. Our experiments show that: (i) the update time required by the new algorithms is, on average, orders of magnitude smaller than that required by the recomputation from scratch via ptl; (ii) the updated graph and labeling induce both query time performance and space overhead that are equivalent to those that are obtained by the recomputation from scratch via ptl. This suggests that our new solution is an effective approach to handling the journey planning problem in delay-prone transit networks. View Full-Text
Keywords: journey planning; transit networks; dynamic graph algorithms; algorithms engineering; massive datasets; experimental algorithmics journey planning; transit networks; dynamic graph algorithms; algorithms engineering; massive datasets; experimental algorithmics
►▼ Show Figures 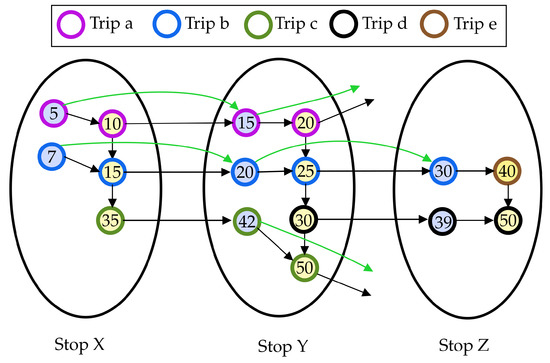