In recent years, mobile data services have developed rapidly, and the demand for wireless spectrum resources is growing. Therefore, the technology of cognitive radio was invented. Spectrum sensing, which is an important part of cognitive radio, is aimed to sense whether the primary user (PU) occupies a specific frequency spectrum resource at a specific time in a particular location. Because of the existence of path loss and shadow effect, there is a large error in single detection problem. Cooperative spectrum sensing can solve this problem [1].
There are five hard-decision fusion methods for cooperative spectrum sensing, including “and” fusion, “or” fusion, voting fusion, maximum posterior probability fusion and Bayesian fusion [2]. Soft-data fusion schemes like square law selection fusion, maximal ratio combination fusion, square law combining fusion and selection combining are analyzed in [3]. The selection of SUs will influence the performance of spectrum sensing. In [4], SUs are selected by the size of the signal-to-noise ratio. SUs need to send the signal-to-noise ratio to base station for selecting, but it will increase the data overhead of the SUs. The dynamic selection of SUs in sensing system is studied, and a distributed sensing compensation method is put forward to solve the problem in [5]. Game theory is also applied to spectrum sensing, and the rewards of SUs are related to the reporting results. SUs will get higher rewards if their results are correct, otherwise, they will get lower rewards [6]. Because the communication between SUs and base station mostly adopts wireless communication, there must be error codes and packet loss. In [7], this phenomenon is analyzed, and the accuracy of data fusion is also calculated. All the papers above assume that the SUs are willing to participate in the sensing. In [8,9], reputation mechanism is considered in the cooperative spectrum sensing. While the smartphones have been popular, the robust spectrum sensing and cloud-based architecture has been studied, [10,11,12]. The spectrum assignment methods are also studied in [13,14,15]. In [16], how the selection of SUs can influence the performance of spectrum sensing is analyzed. However, because the SUs will not take part in the sensing without some rewards, a certain mechanism is needed to stimulate the SUs.
Crowd sensing is a method of collecting samples, and the main way is to collect samples by using intelligent equipment. Crowd sensing incentive mechanism is a mechanism for recruiting and stimulating the people involved in sensing. This mechanism can be divided into monetary incentive mechanism and non-monetary incentive mechanism [17]. At present, most of the research is monetary incentive mechanism. In [18], the game theory is applied to crowd sensing incentive mechanism, and the economic model of crowd sensing application is studied to improve the quality of sensing data. In [19], the task assignment problem of sensitive service quality is studied, the rewards of participants are related to the quality of sensing data. To ensure that the tasks are completed, each task can be completed by more than one participant. In order to reduce the social cost, a task participant cooperation mechanism is designed [20]. Participants in this mechanism are interrelated, so it is easy for participants to cooperate, and the sensing cost can be reduced. However, the above literatures do not concretely translate the crowd sensing into some applications.
In cognitive radio network, the SUs need to sense the spectrum to judge whether the primary user (PU) occupies a specific frequency spectrum resource. In order to stimulate the SUs to take part in the cooperative spectrum sensing, we need to combine the crowd sensing incentive mechanism with the cooperative spectrum sensing. The contributions of this paper are summarized as follows:

This paper is organized as follows. In Section 2, we introduce the system model. In Section 3, we propose a cooperative spectrum-sensing algorithm based on crowd sensing incentive mechanism under non-ideal channel with the optimal SUs’ utilities. The numerical simulation results and comparisons are given in Section 4, and finally, we draw the conclusions in Section 5.

The base station first releases information about the channel to be sensed, the correct reward and incorrect reward for the SUs. The SUs optimize the sensing time and signal transmission power to obtain the optimal utility expectation of the SUs according to the utility expectation formula. If the utility expectation is greater than 0, the SU would execute the sensing and send its sensing result to the base station. After the data fusion, the base station will offer the rewards to SUs in accordance with the correctness of the decision received, if the result of SU is the same with the result of the fusion decision, SU can get the correct reward , otherwise the reward is . The reward expectation of SU is given by:
The utility expectation of SU can be expressed by: where indicates the signal transmission power of SU . and represent the cost of unit sensing time and the cost of unit transmission power, respectively.
In order to improve the efficiency of spectrum sensing, a SU will not take part in the spectrum sensing if the detection probability is less than 0.5, because the sensing result does not have reference value. Hence a SU will take part in the spectrum sensing when the detection probability is greater than 0.5. It is known from the properties of Q function that if the detection probability is greater than 0.5, the argument of the Q function in (2) is less than 0, i.e.,
The goal of this paper is that the SU can obtain the optimal utilities by optimizing the sensing time and the transmission power, and the optimization problem can be expressed as follows: where the constraint condition (13) is derived from (11), and (14) indicates that the transmission power of the SU is greater than 0.
As long as the optimization problem is proved to be a convex optimization problem, the optimal sensing time and transmission power can be obtained through the KKT conditions [23].
Proposition 1.
Optimization problem is a convex optimization problem.
The proof is given in Appendix A.
Set , and represents 2 constraints on convex optimization problem. We define the Lagrangian equation as follows:
Thus, the KKT condition for the convex optimization problem is given by:
According to (15), we can get . Hence (14) can be expressed by:
The optimal sensing time and emission power can be obtained by solving Equation (17).
In summary, the algorithm of crowd cooperative spectrum sensing is as follows (Algorithm 1):

The manuscript was written by Xinxin Lv under the guidance of Qi Zhu. All authors reviewed the manuscript.

Proof for Proposition 1: It is obvious that the feasible domain of the optimization problem is a convex set, and then we prove that the objective function is a convex function.
The necessary and sufficient condition for a function to be a convex function is that the Laplasse operator is not less than 0 [23], i.e.,
For the sake of simplicity, without losing the generality, we set , i.e., the probability of the existence of the main user is 0.5. (10) can be simplified as follows:
So the Laplasse operator of the objective function can be expressed as follows:
First calculate , and we can get: where
Because the signal-to-noise ratio is positive and therefore . Because , so , i.e., . So
According to the definition and (5), we can get and . So
Then calculate , and we can get: where indicates noise power, and indicates path loss. Set target false alarm probability less than 0.5. Because , we can get:
Thus, we can get:
Hence objective function is a convex function. Optimization problem is a convex optimization problem. Proof complete. 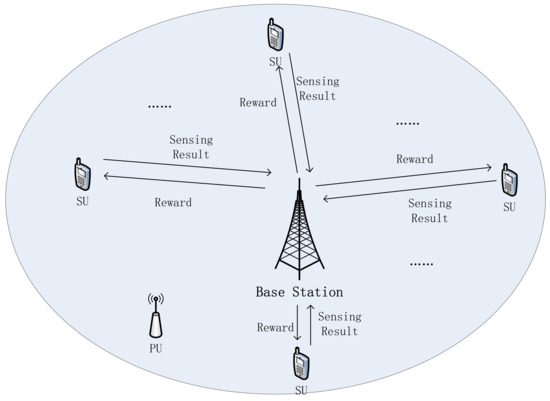 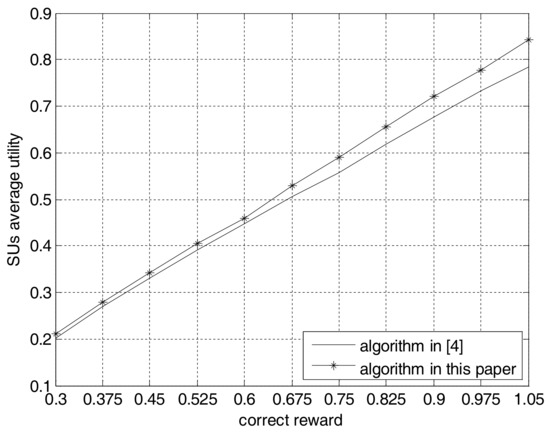 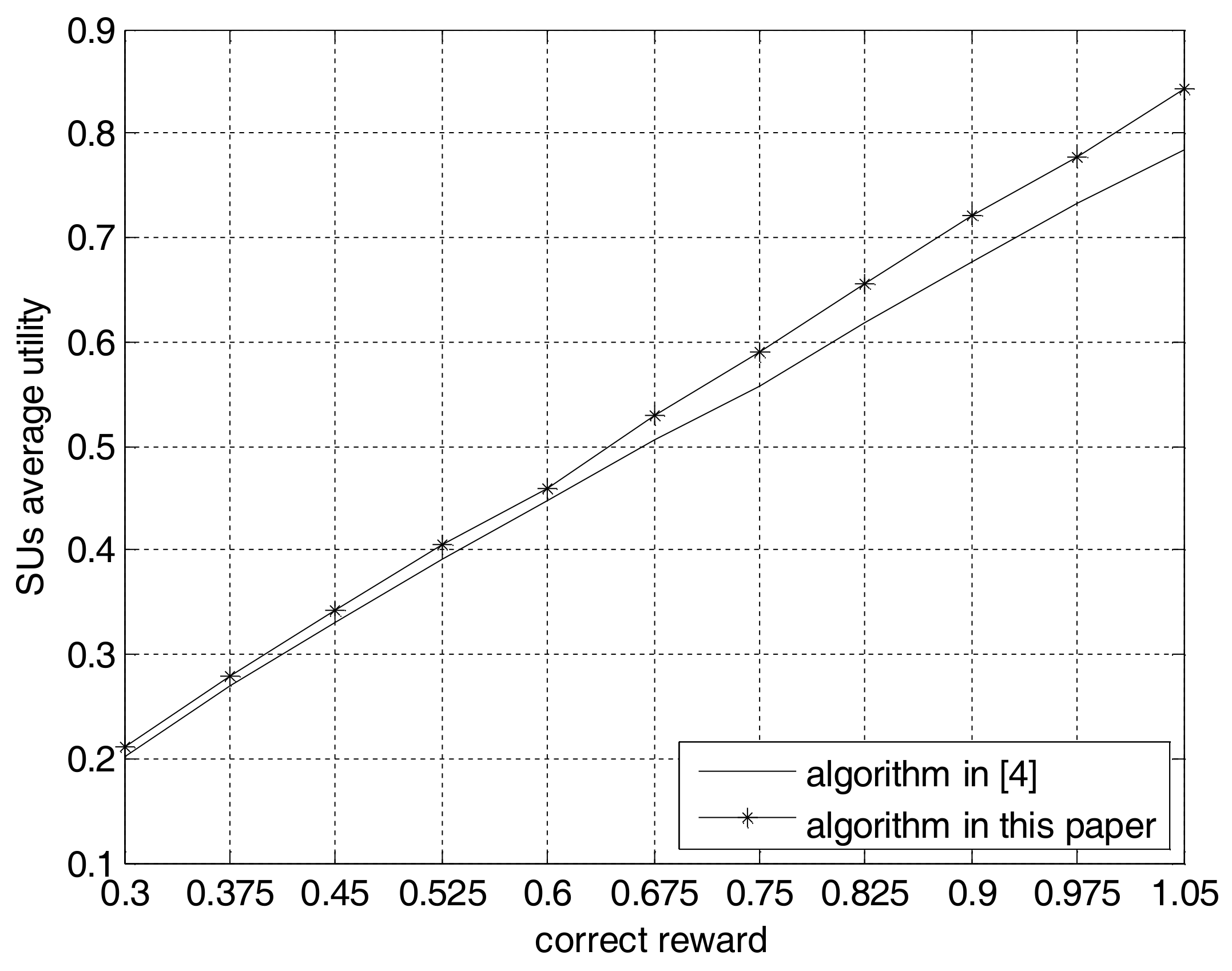 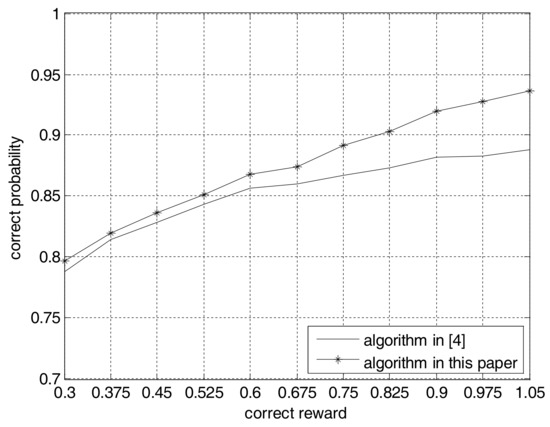 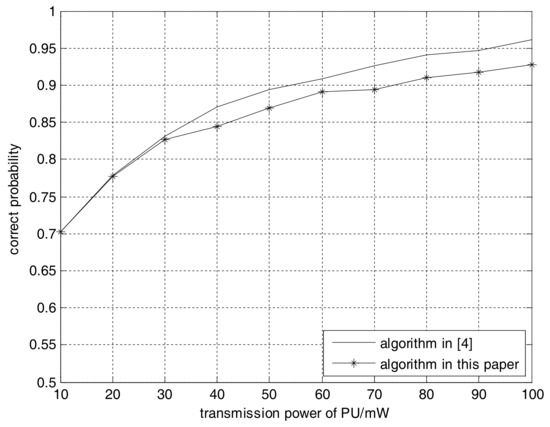