2. Structure and Principle of the Semi-Active Energy Regenerative Suspension with an EHA

3. Nonlinear Modeling of the Semi-Active Energy Regenerative Suspension with an EHA

3.1. Dynamic Model of a Two Degrees of Freedom Suspension System for a Quarter-Vehicle

In this paper, a quarter-car model with two degrees of freedom was exactly established [17], which is shown in Figure 3.
According to Figure 3, the equations of motion are obtained by using Newton’s laws of motion:
The state vector and output vector are selected as follows: where is the sprung mass acceleration, is the suspension deflection response, is the tire load response, and is the speed excitation of the road input. In this way, the state equation of the suspension can be obtained as follows: where is the state matrix, is the input matrix, is the output matrix, and is the transfer matrix. When the control input force is 0, it becomes a passive suspension.
The road surface input model adopts filtered white noise [18] as follows: where is the input displacement of the road, is the road irregularities coefficient, is the lower cutoff frequency, is the vehicle speed, and is unit white noise.

In order to provide experimental sample data for the model parameter identification, a physical prototype of an EHA, which is mainly composed of a hydraulic cylinder, a hydraulic motor, and a brushless DC motor, is developed, and according to the national standards of QC/T545-1999 “Test method for automobile telescopic shock absorber”, a force characteristics test of an EHA semi-active suspension system is carried out on an ES-6-230 numerical control hydraulic vibration table as shown in Figure 4. In the experiment, the vibration table input excitation uses sinusoidal input at the frequency of 1 Hz and the amplitude of 30 mm. An LTR-1 pull pressure sensor is used to collect the suspension’s output force signal in the passive state, and the change of the suspension’s output force with time is shown in Figure 5. In order to eliminate the influence of initial conditions on the test results, the sampling time starts from 5 s.
The parameters of the nonlinear model are continuously approximated by the least squares method based on the experimental data, and the objective function of the algorithm is expressed as: where is the equivalent spring stiffness, is the inherent damping coefficient of the system, is the theoretical model value, and is the actual test value.
Through the identification of the parameters, the equivalent spring stiffness of the EHA semi-active suspension system is 13,000 , and the inherent damping coefficient is 500 . The above parameters are introduced into the two degrees of freedom suspension dynamics model of the quarter-vehicle, and the simulation results of the EHA actuator output force are compared with the test results, as shown in Figure 5.
Figure 5 shows that the output force of the EHA actuator obtained by parameter identification is in good agreement with the actual output force, which indicates that the established dynamic model of the two degrees of freedom suspension system for a quarter-vehicle is accurate, and the adopted method of model parameter identification is feasible and effective.

3.3. Mathematical Model of the Semi-Active Energy Regenerative Suspension with an EHA

4. The Control Strategy of the Semi-Active Energy Regenerative Suspension with an EHA

5. Parameter Optimization of the Semi-Active Energy Regenerative Suspension with an EHA

In order to further verify the optimization results, the EHA prototype is redeveloped based on the optimization results, and the bench test is carried out as shown in Figure 12. In addition, the EHA actuator in Figure 4 is the original EHA actuator before optimization, and the EHA actuator in Figure 12 is the optimized one. Due to the limitation of test conditions, the test is conducted only for the spring mass acceleration and the energy regenerative power of the semi-active suspension with an EHA. In the test, the DH186 acceleration sensor produced by Donghua testing company is used to collect the spring mass acceleration signal, and the rectifier is used to rectify the three-phase alternating current generated by the DC brushless motor. At the same time, the Donghua DH5902 data acquisition system is used to collect the feed voltage signal. Additionally, according to the relationship between power, voltage, and the internal resistance of the motor, the instantaneous energy regenerative power can be obtained. Under the condition that the sinusoidal is input at the frequency of 2 Hz, the amplitude of 30 mm, and the sampling time of 10 s, the test results of the spring mass acceleration response and energy regenerative power response of the semi-active suspension with an EHA before and after optimization are shown in Figure 13 and Figure 14, respectively.

The authors gratefully acknowledge the support of the National Natural Science Foundation of China (51775426, 51275403), the Service Local Special Program Support Project of Shaanxi Provincial Education Department (17JF017), and the Xi’an Science and Technology Project Funding Project (2017079CG/RC042-XAKD007). The authors would like to thank the anonymous reviewers for their valuable comments that significantly improved the quality of this paper. 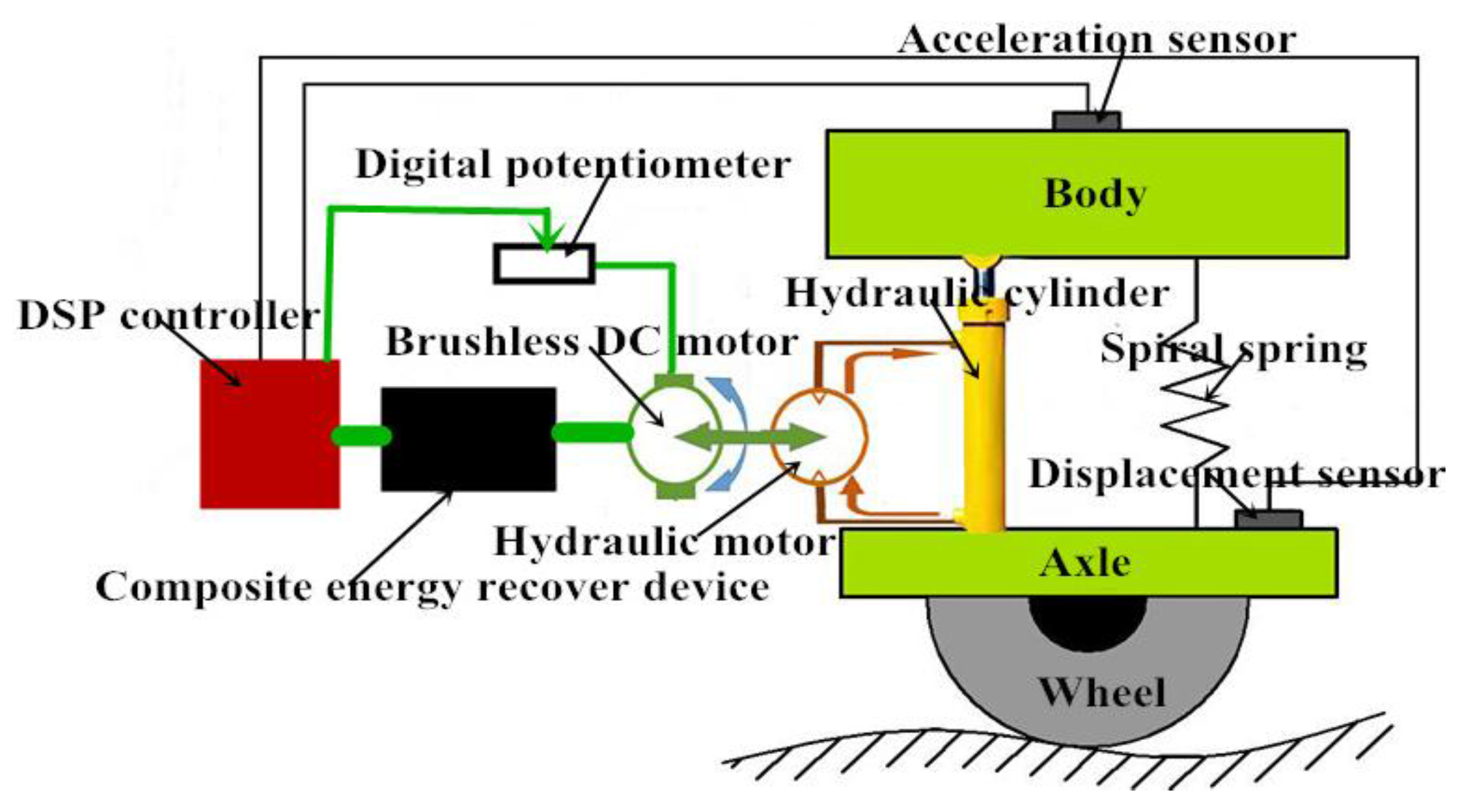 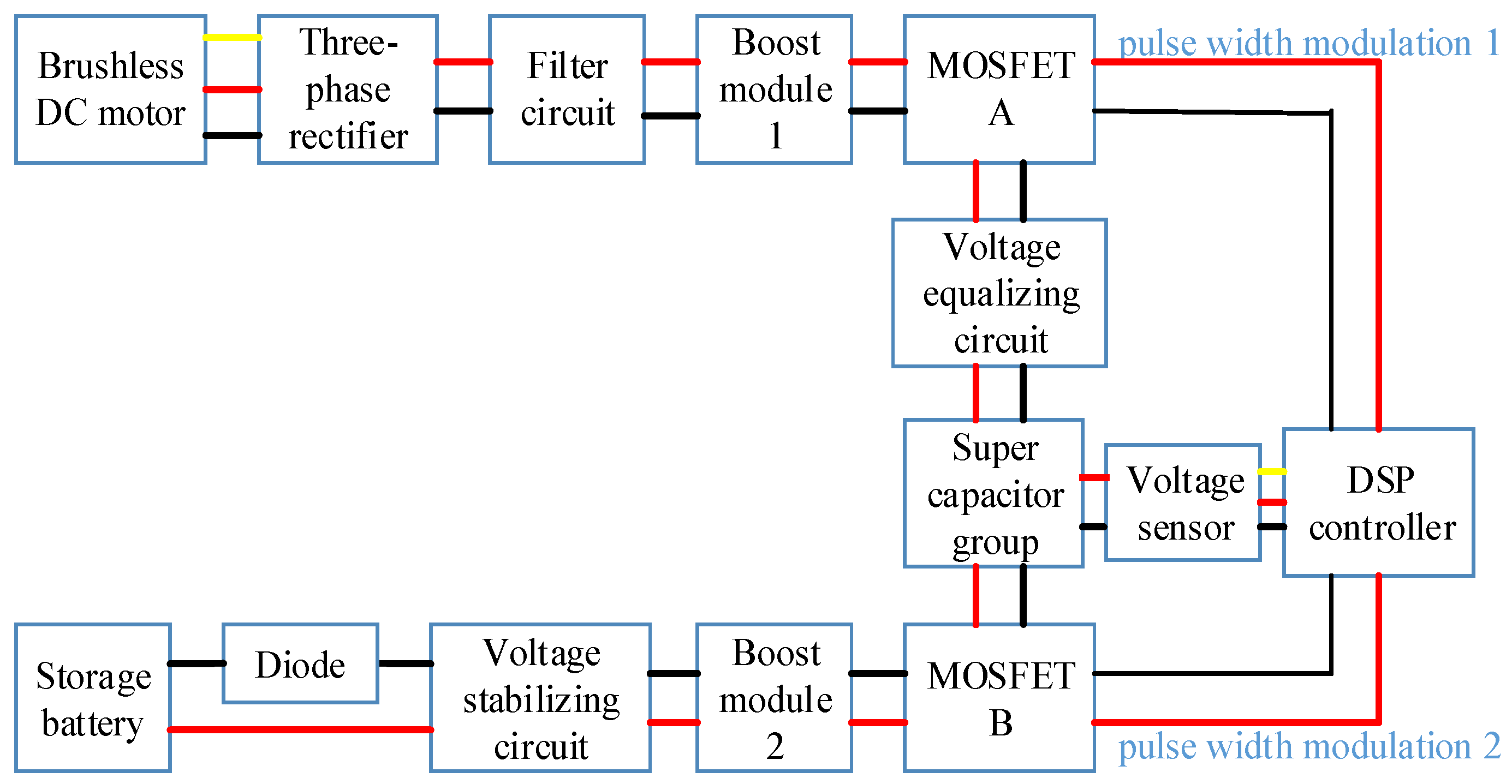 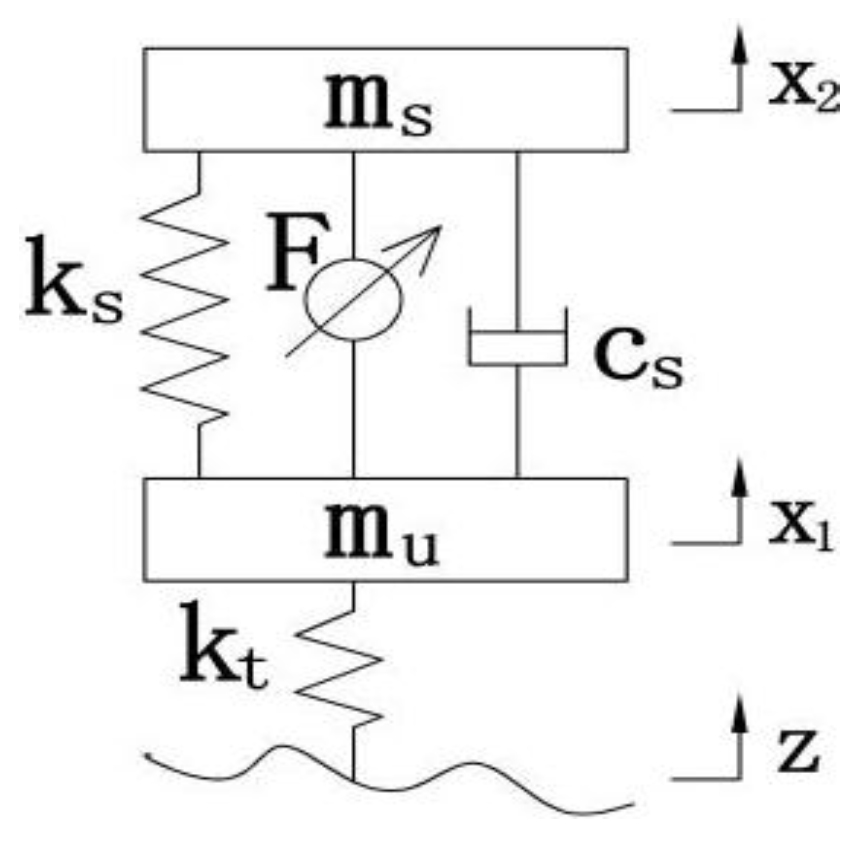 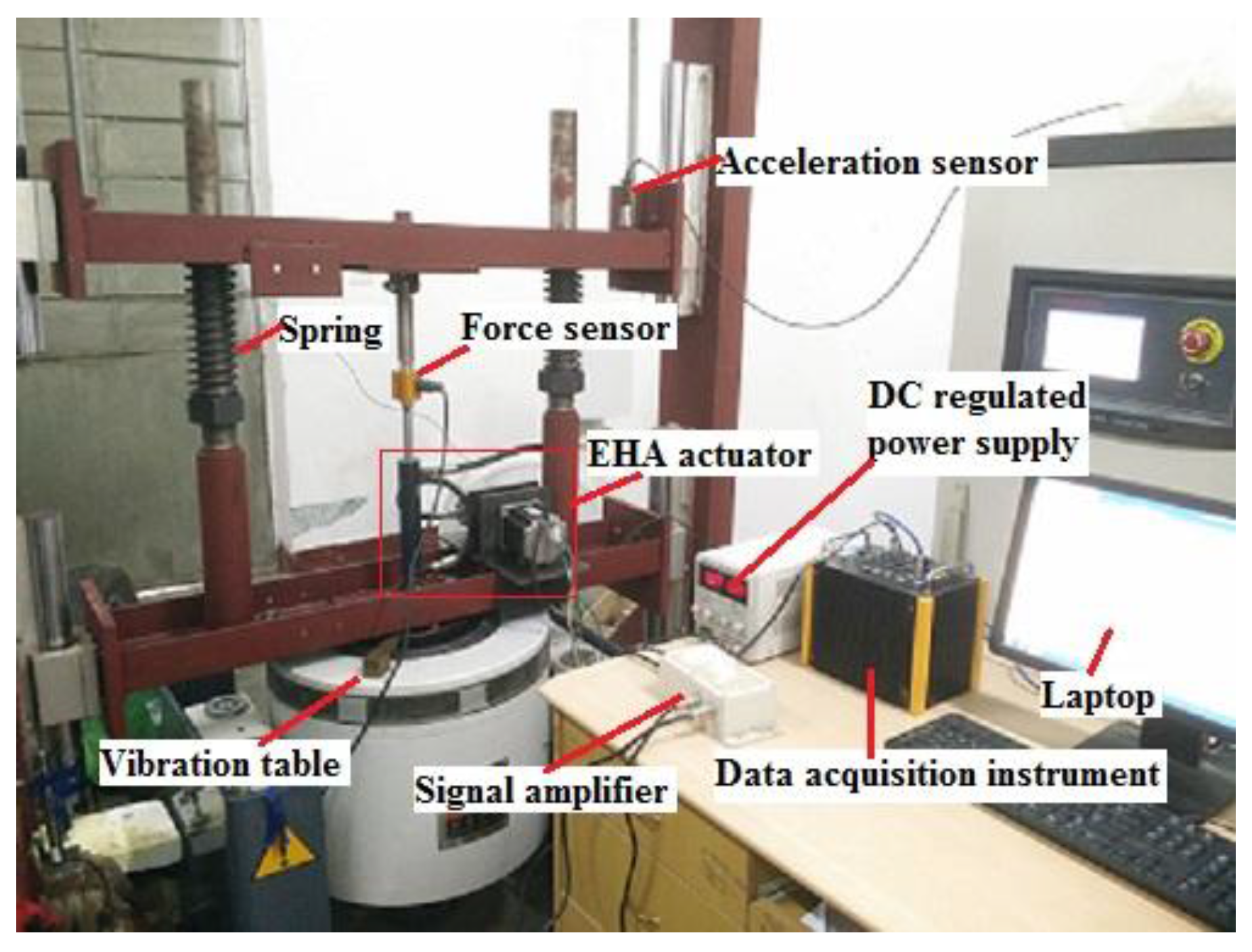 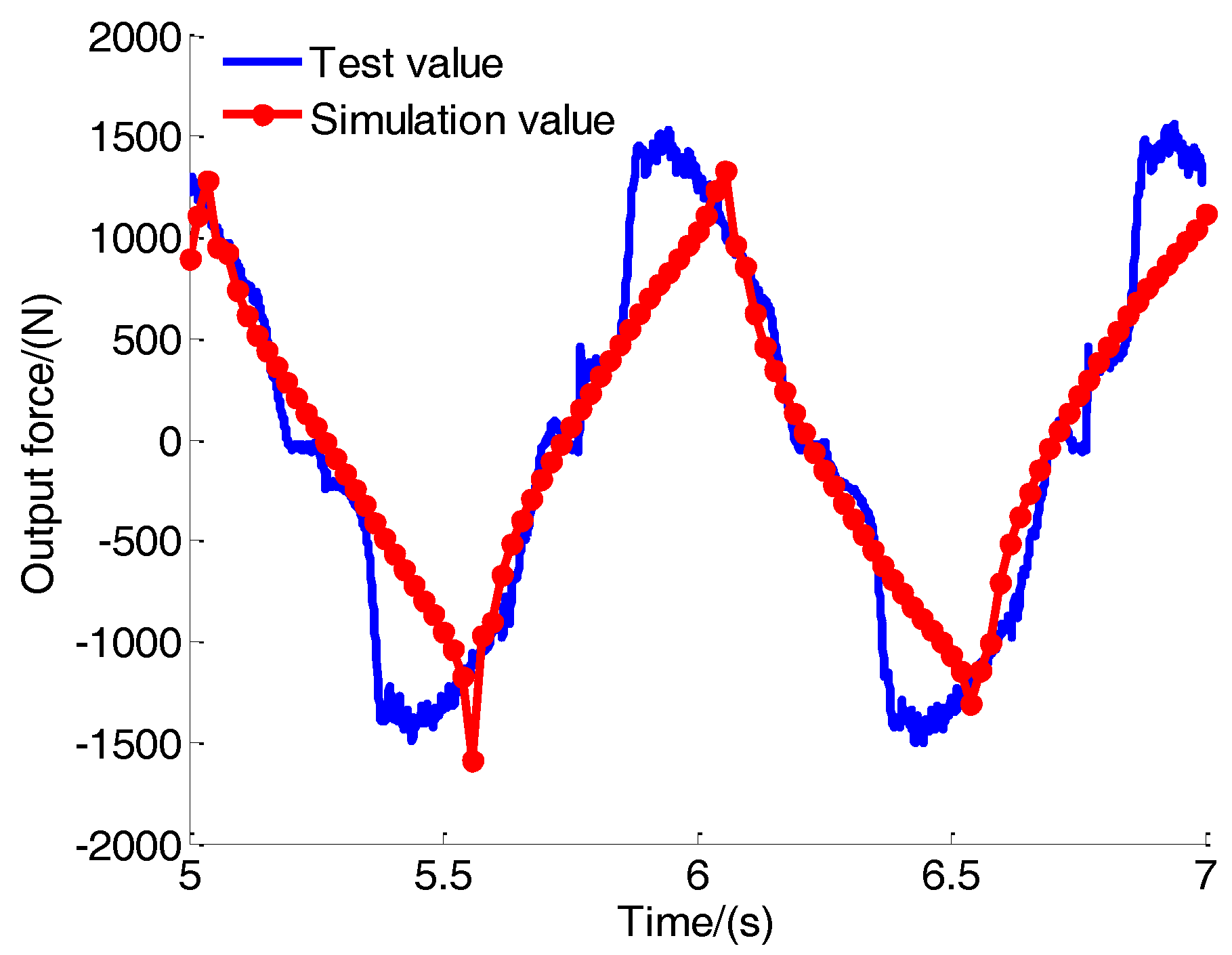 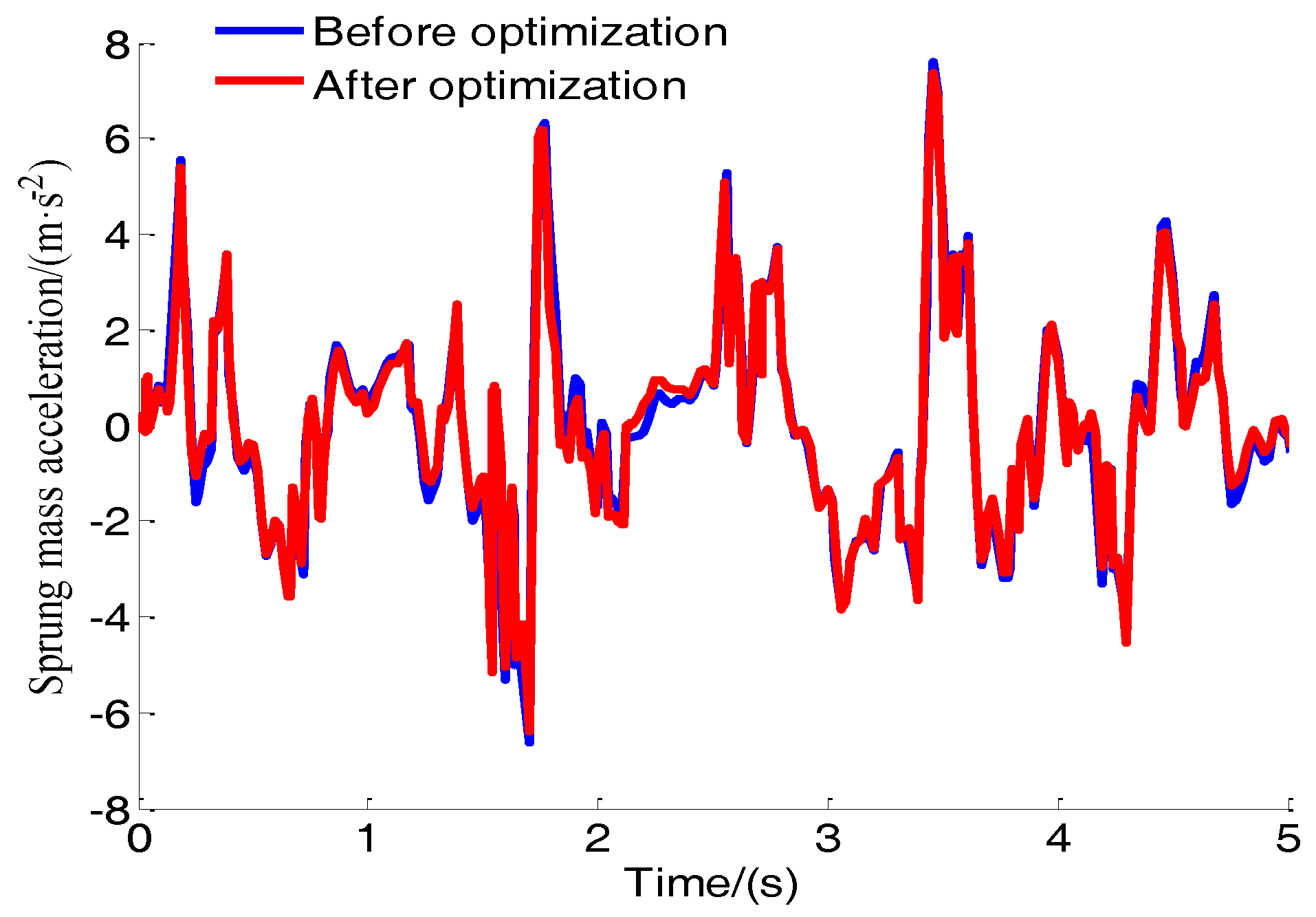 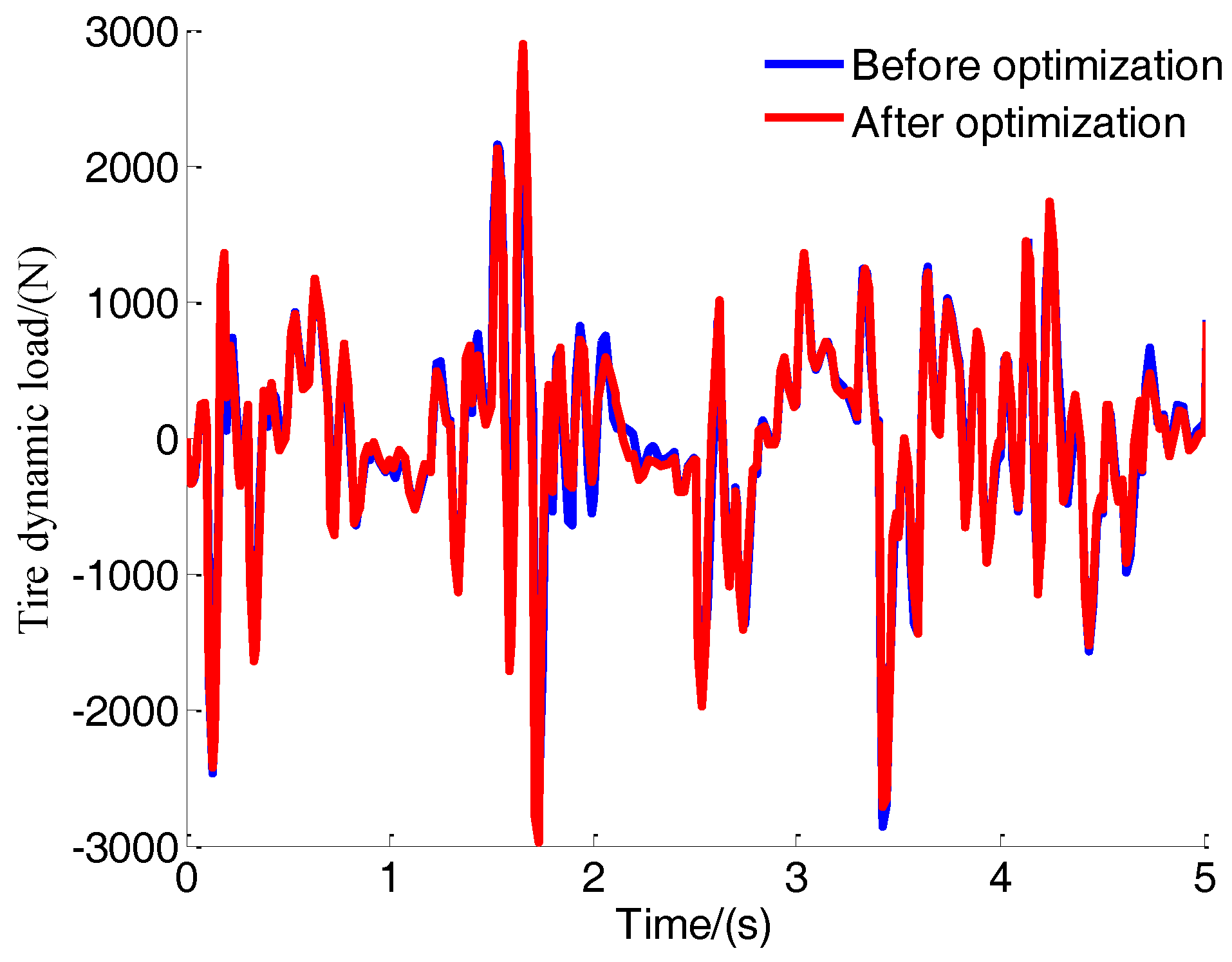 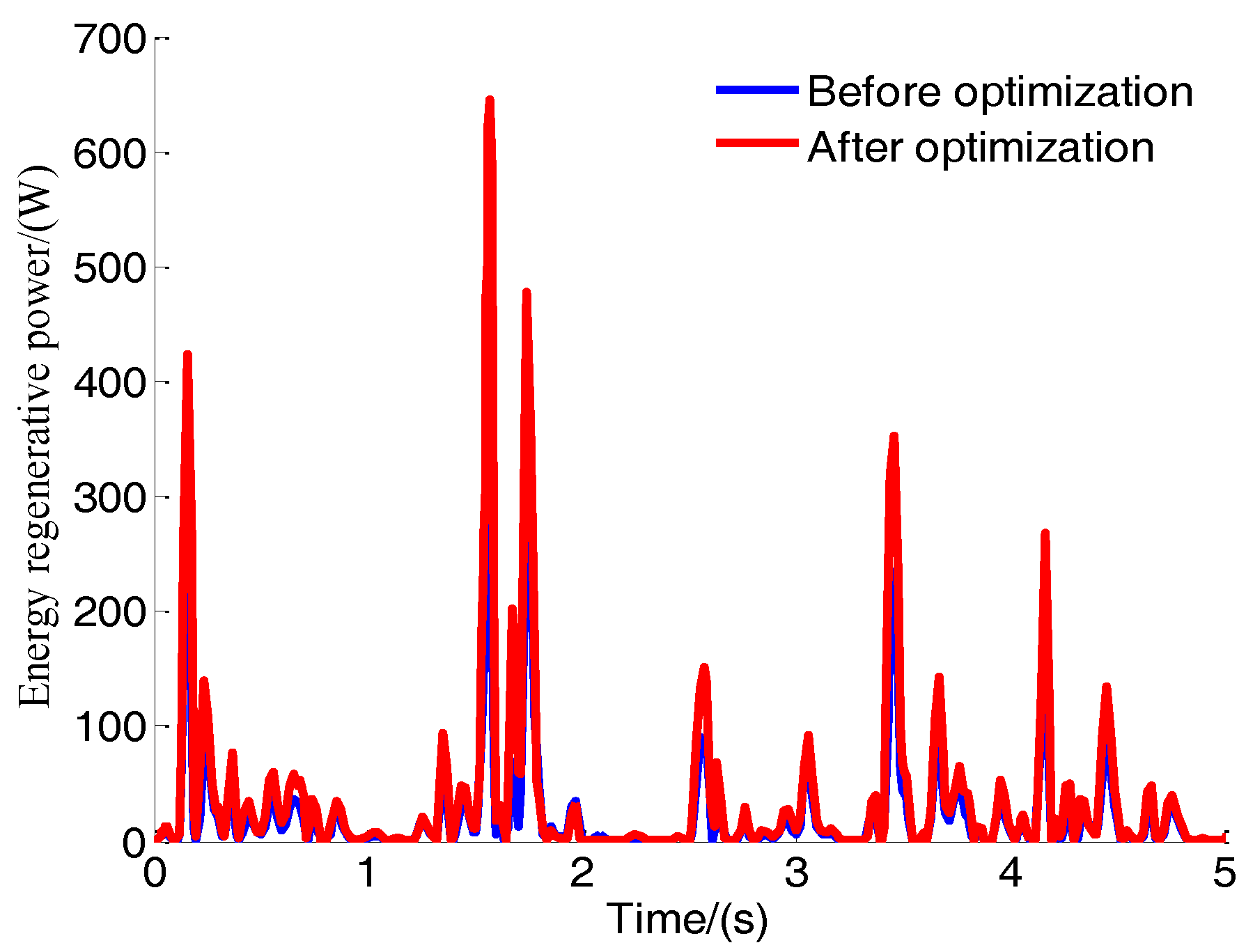 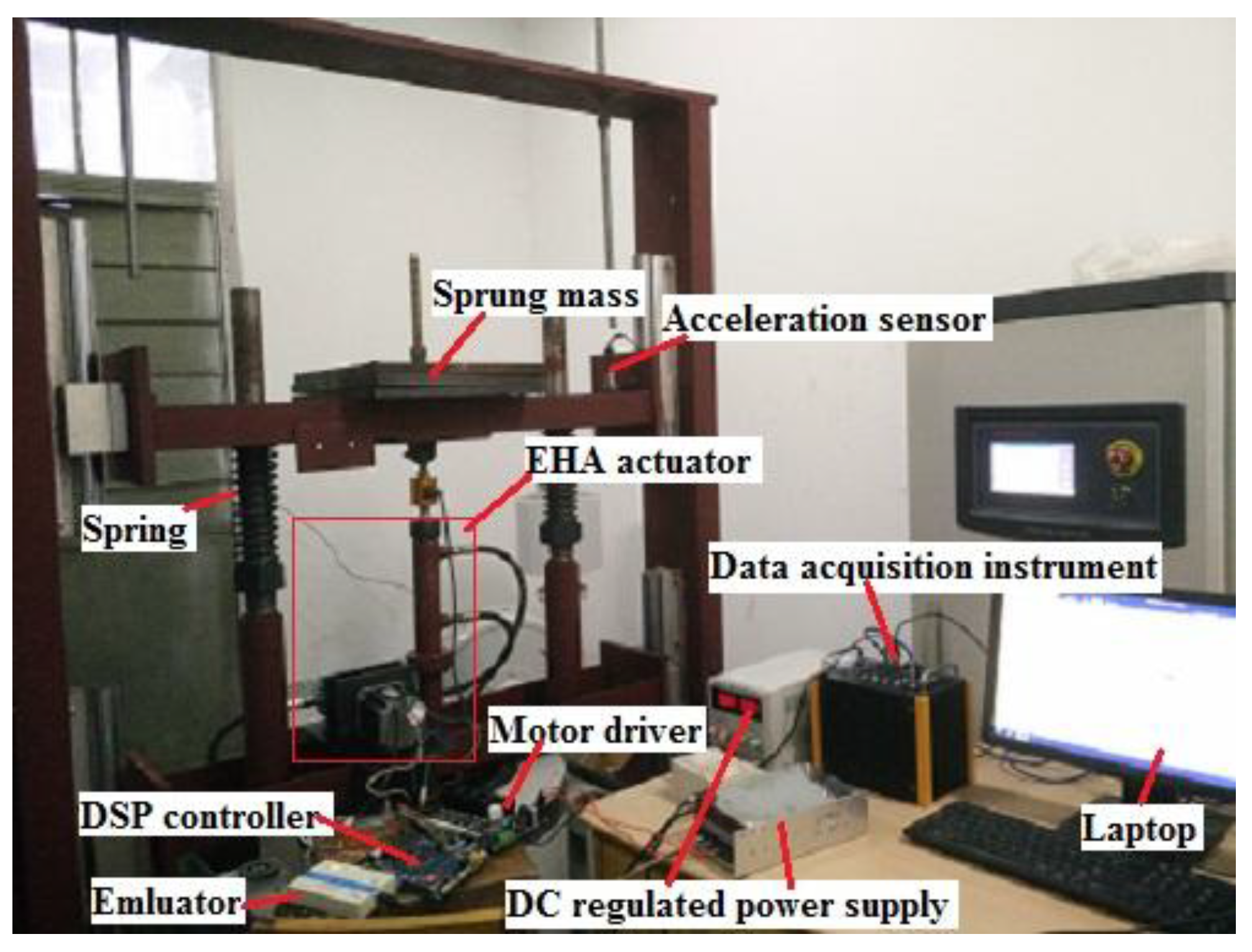 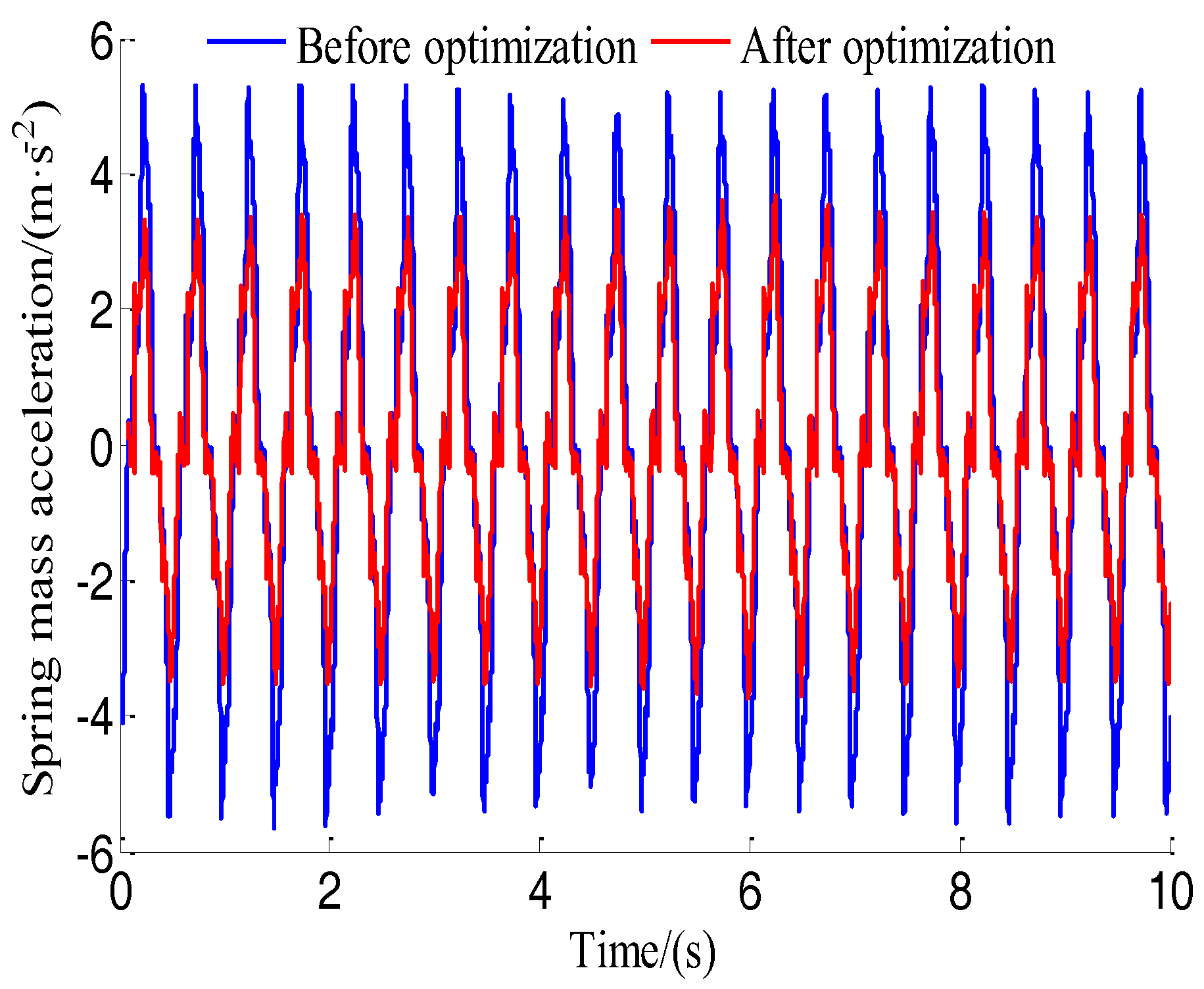 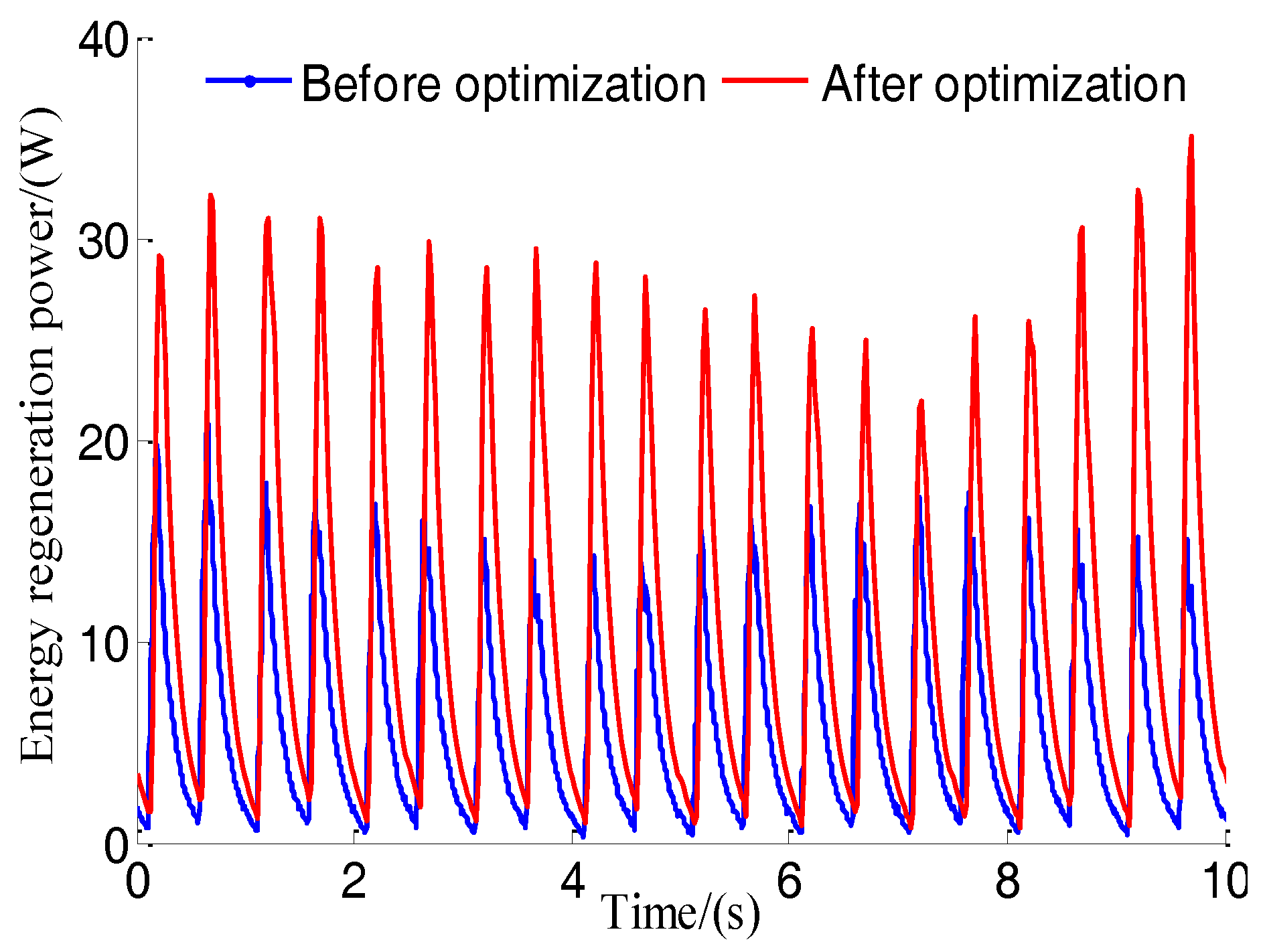