With recent developments of molecular biomimetics that combine genetic engineering and nanotechnology, peptides can be genetically engineered to bind specifically to inorganic components and execute the task of collagen matrix proteins. In this study, using biogenous tooth enamel as binding substrate, we identified a new heptapeptide (enamel high-affinity binding peptide, EHBP) from linear 7-mer peptide phage display library. Through the output/input affinity test, it was found that EHBP has the highest affinity to enamel with an output/input ratio of 14.814 × 10−7, while a random peptide (RP) displayed much lower output/input ratio of 0.00035 × 10−7. This binding affinity was also verified by confocal laser scanning microscopy (CLSM) analysis. It was found that EHBP absorbing onto the enamel surface exhibits highest normalized fluorescence intensity (5.6 ± 1.2), comparing to the intensity of EHBP to enamel longitudinal section (1.5 ± 0.9) (p < 0.05) as well as to the intensity of a low-affinity binding peptide (ELBP) to enamel (1.5 ± 0.5) (p < 0.05). Transmission electron microscopy (TEM), Attenuated total Reflection-Fourier transform infrared spectroscopy (ATR-FTIR), and X-ray Diffraction (XRD) studies further confirmed that crystallized hydroxyapatite were precipitated in the mineralization solution containing EHBP. To better understand the nucleation effect of EHBP, EHBP was further investigated on its interaction with calcium phosphate clusters through in vitro mineralization model. The calcium and phosphate ion consumption as well as zeta potential survey revealed that EHBP might previously adsorb to phosphate (PO43−) groups and then initiate the precipitation of calcium and phosphate groups. This study not only proved the electrostatic interaction of phosphate group and the genetically engineering solid-binding peptide, but also provided a novel nucleation motif for potential applications in guided hard tissue biomineralization and regeneration. View Full-Text
Keywords: biomimetic; biomineralization; hydrxyapatite; solid-binding peptide biomimetic; biomineralization; hydrxyapatite; solid-binding peptide
►▼ Show Figures 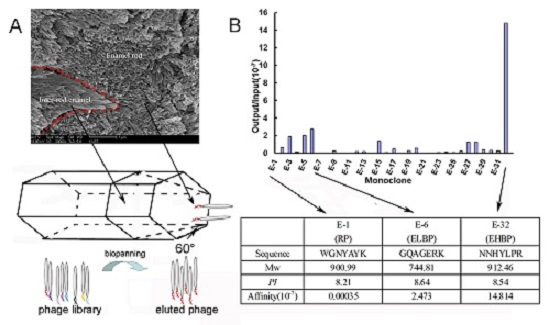