The present study is aimed at predicting downward flame spread characteristics over poly(methyl methacrylate) (PMMA) with different sample dimensions in different pressure environments. Three-dimensional (3-D) downward flame spread experiments on free PMMA slabs were conducted at five locations with different altitudes, which provide different pressures. Pressure effects on the flame spread rate, profile of pyrolysis front and flame height were analyzed at all altitudes. The flame spread rate in the steady-state stage was calculated based on the balance on the fuel surface and fuel properties. Results show that flame spread rate increases exponentially with pressure, and the exponent of pressure further shows an increasing trend with the thickness of the sample. The angle of the pyrolysis front emerged on sample residue in the width direction, which indicates a steady-burning stage, varies clearly with sample thicknesses and ambient pressures. A global non-dimensional equation was proposed to predict the variation tendency of the angle of the pyrolysis front with pressure and was found to fit well with the measured results. In addition, the dependence of average flame height on mass burning rate, sample dimension and pressure was proposed based on laminar diffusion flame theory. The fitted exponent of experimental data is 1.11, which is close to the theoretical value. View Full-Text
Keywords: downward flame spread; three-dimensional; poly(methyl methacrylate) (PMMA); pressure; thermal transfer downward flame spread; three-dimensional; poly(methyl methacrylate) (PMMA); pressure; thermal transfer
►▼ Show Figures 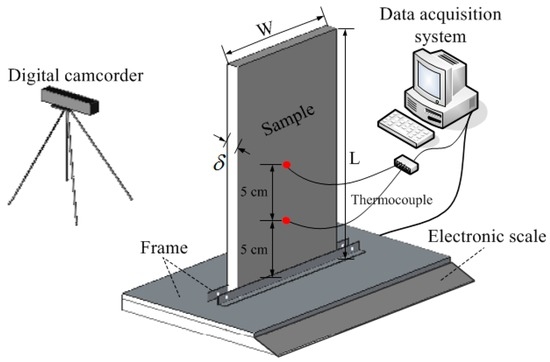