Cast AZ91 magnesium alloy rod was cut into specimens with dimension of Ø15 × 2 mm. Before the test each specimen was ground with 1200 grit SiC paper, cleaned in acetone in an ultrasonic bath (K5 Kraintek, Hradec Králové, Czech Republic) for 5 min to remove residual impurities (grease etc.), rinsed with isopropanol, and dried by warm air. For each measurement five random specimens were prepared.
Electrochemical tests were performed by potentiostat/galvanostat BioLogic VSP-300 in 0.1 M NaCl solution in a three-electrode system: AZ91 alloy was used as the working electrode, a saturated calomel electrode (SCE) as the reference electrode, and a platinum gauze as the counter electrode. All of the measurements were performed at room temperature. Stabilization time of the specimen exposed to the corrosion environment to read the value of open circuit potential (EOCP) was 5 min. An area of the specimen exposed to the corrosion environment was 1.0 cm2. Measured data were evaluated by BioLogic EC-Lab software (V10.44, BioLogic, Claix, France).
Cathodic polarization curves (CPCs) were measured by polarizing the specimen from the open circuit potential (EOCP) to a value of −100 mV vs. EOCP. Anodic polarization curves (APCs) were measured by polarizing the specimen surface from EOCP to a value of +100 mV vs. EOCP. Potentiodynamic (linear) polarization curves (PCs) containing cathodic and anodic branches together were measured by polarizing the specimen surface to a range from −100 mV to +200 mV vs. EOCP, [2,57], to ensure the Tafel region on the anodic branch of the PC. The scan rate was 1 mV·s−1. All of the polarization curves were evaluated by Tafel extrapolation (Figure 1) of Tafel regions to obtain icorr.

The microstructure of cast AZ91 magnesium alloy is shown in Figure 2a. The microstructure of the alloy consists of α-Mg areas (solid solution of alloying elements in magnesium), β phase (Mg17Al12 intermetallic phase), Mg–Al discontinuous precipitate, and Al–Mn based intermetallic particles.
The distribution of basic alloying elements and present phases was verified by EDS analysis and is presented in a form of elemental maps in Figure 2b–e.

Three different methods of linear polarization were applied to obtain corrosion potential and corrosion current density of the examined cast AZ91 alloy.
Figure 3 shows CPCs measured by polarization of the specimen to the cathodic region (cathodic polarization; −100 mV vs. EOCP). In these conditions hydrogen depolarization occurs on the specimen surface observed via the hydrogen bubble formation. The Tafel region, with a size of approximately 50 mV from the corrosion potential (Ecorr), was used for the data extrapolation, Figure 1, to obtain the corrosion current density icorr. The average value of the corrosion current density from the CPCs obtained from five specimens (Table 2) was 15.4 ± 1.0 µA·cm−2.
Measured APCs are shown in Figure 4. The curves were measured by polarization specimen to the anodic region (anodic polarization; +100 mV vs. EOCP). In these conditions oxidation (corrosion) of the magnesium alloy occurs. At the end of the curves non-linear regions are observed. This could indicate the beginning of pitting corrosion [75]. With respect to this fact was a potential at the beginning of the non-linear region determined as pitting potential Epit. The range of the Tafel region used for the curves’ extrapolation and corrosion current density determination was not of 50 mV (length sufficient for curve extrapolation according to the literature [63,64]), however, the extrapolation was performed on sufficient parts of the curves and the obtained data are given in Table 3. The average value of EOCP determined from APCs was −1.582 ± 0.004 V and the corrosion current density was of 8.0 ± 0.6 µA·cm−2.
Obtained linear polarization curves, containing cathodic and anodic polarization branches, commonly used for material electrochemical characterization are shown in Figure 5. Corrosion attack in the form of pitting was observed at the anodic branch of the curves. The attack was characterized by an increase of current density which belongs to the value of pitting potential (Epit) [75]. The pitting was observed before the beginning of the Tafel region (between 50 and 100 mV vs. EOCP [63,64]). Therefore, the Tafel region for these anodic branches of the PCs were insufficient to obtain relevant values of icorr. On the other hand, the Tafel regions in the cathodic branch of PCs were more than 50 mV vs. EOCP. In such situations only the cathodic part of the curve, in combination with Ecorr, for the extrapolation was used. The characteristics obtained from the PCs evaluation are given in Table 4.
The average value of EOCP determined from PCs was −1.575 ± 0.001 V; Ecorr was of −1.550 ± 0.001 V and the corrosion current density was of 14.7 ± 0.6 µA·cm−2.

This study investigated the effect of using a polarization method on the obtained values of electrochemical characteristics describing the corrosion behavior of cast AZ91 magnesium alloy. The obtained results could be formulated as follows:

This work was supported by the project “Materials Research Centre at FCH BUT—Sustainability and Development”, REG LO1211, with financial support from National Programme for Sustainability I (Ministry of Education, Youth and Sports), Czech Republic. 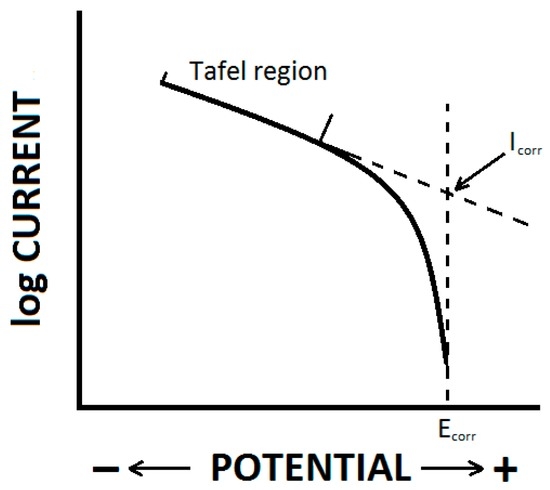 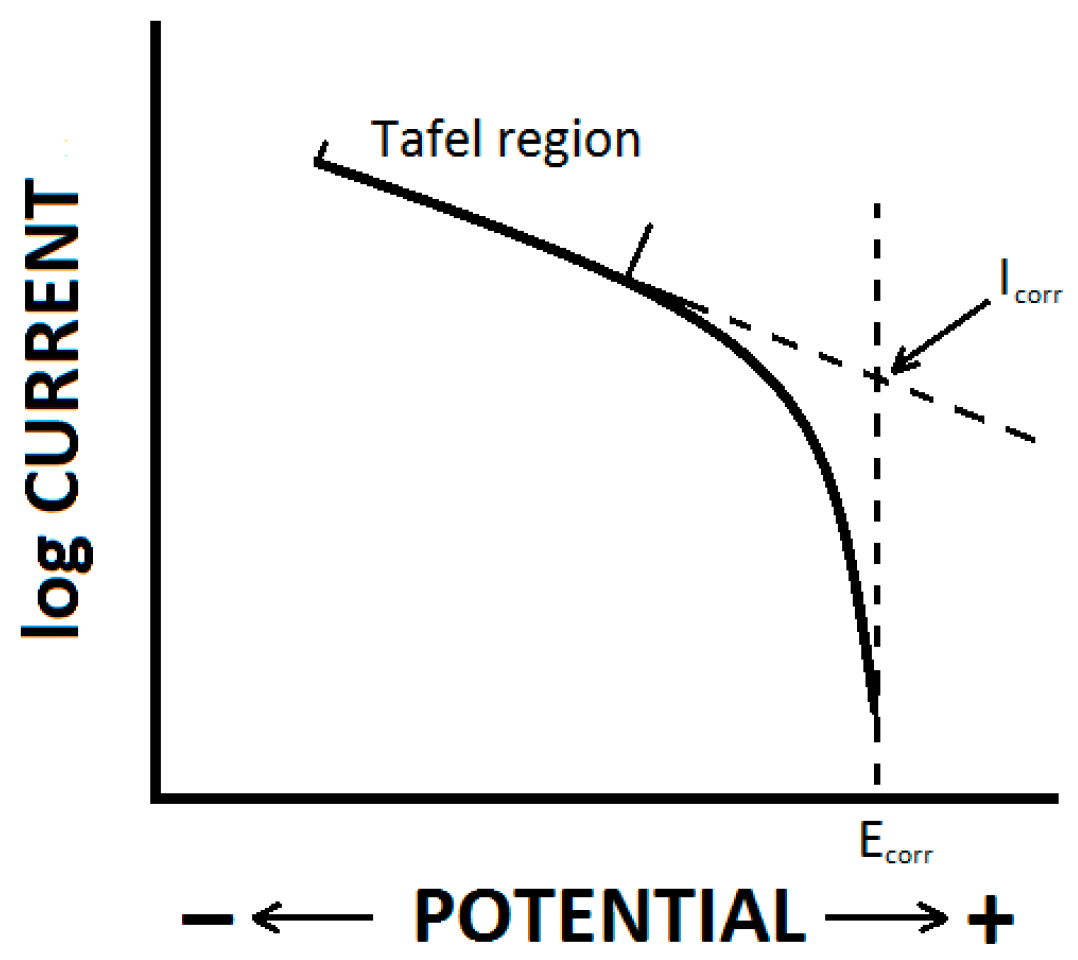 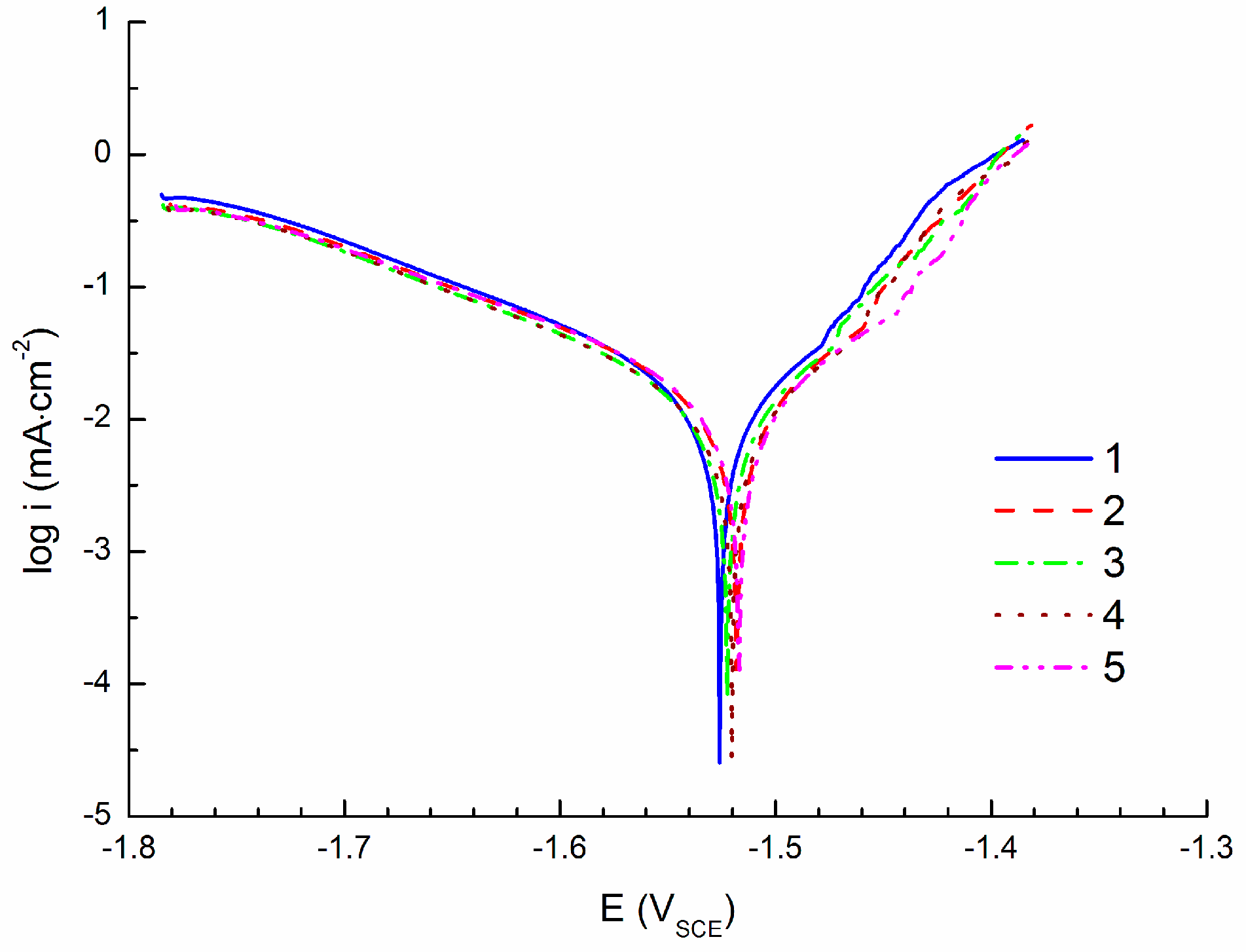