We report on the morphological influence of solution-processed zinc oxide (ZnO) semiconductor films on the electrical characteristics of ZnO thin-film transistors (TFTs). Different film morphologies were produced by controlling the spin-coating condition of a precursor solution, and the ZnO films were analyzed using atomic force microscopy, X-ray diffraction, X-ray photoemission spectroscopy, and Hall measurement. It is shown that ZnO TFTs have a superior performance in terms of the threshold voltage and field-effect mobility, when ZnO crystallites are more densely packed in the film. This is attributed to lower electrical resistivity and higher Hall mobility in a densely packed ZnO film. In the results of consecutive TFT operations, a positive shift in the threshold voltage occurred irrespective of the film morphology, but the morphological influence on the variation in the field-effect mobility was evident. The field-effect mobility in TFTs having a densely packed ZnO film increased continuously during consecutive TFT operations, which is in contrast to the mobility decrease observed in the less packed case. An analysis of the field-effect conductivities ascribes these results to the difference in energetic traps, which originate from structural defects in the ZnO films. Consequently, the morphological influence of solution-processed ZnO films on the TFT performance can be understood through the packing property of ZnO crystallites. View Full-Text
Keywords: solution process; oxide semiconductor; thin-film transistor; surface morphology solution process; oxide semiconductor; thin-film transistor; surface morphology
►▼ Show Figures 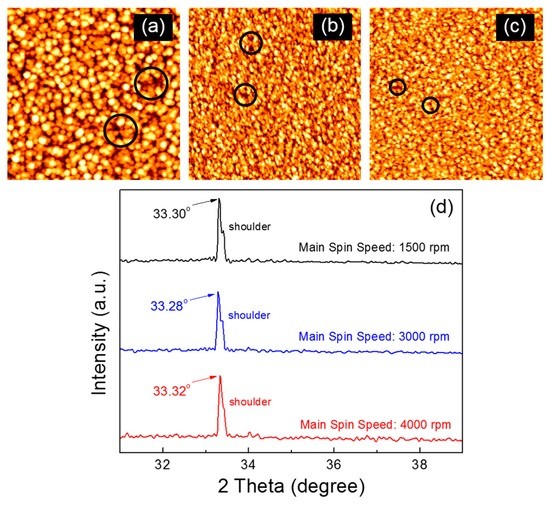