Direct band electroluminescence (EL) from tensile-strained Si0.13Ge0.87/Ge multiple quantum wells (MQWs) on a Ge virtual substrate (VS) at room temperature is reported herein. Due to the competitive result of quantum confinement Stark effect and bandgap narrowing induced by tensile strain in Ge wells, electroluminescence from Γ1-HH1 transition in 12-nm Ge wells was observed at around 1550 nm. As injection current density increases, additional emission shoulders from Γ2-HH2 transition in Ge wells and Ge VS appeared at around 1300–1400 nm and 1600–1700 nm, respectively. The peak energy of EL shifted to the lower energy side superquadratically with an increase of injection current density as a result of the Joule heating effect. During the elevation of environmental temperature, EL intensity increased due to a reduction of energy between L and Γ valleys of Ge. Empirical fitting of the relationship between the integrated intensity of EL (L) and injection current density (J) with L~Jm shows that the m factor increased with injection current density, suggesting higher light emitting efficiency of the diode at larger injection current densities, which can be attributed to larger carrier occupations in the Γ valley and the heavy hole (HH) valance band at higher temperatures.
Keywords: ultra-high vacuum chemical vapor deposition (UHVCVD); tensile strain; SiGe/Ge multiple quantum wells; electroluminescence ultra-high vacuum chemical vapor deposition (UHVCVD); tensile strain; SiGe/Ge multiple quantum wells; electroluminescence

In the past several decades, silicon (Si)-based microelectronic integrated circuits (ICs) have achieved abundant progress based on the scaling down rule following Moore’s law [1]. However, as the channel length of metal-oxide-semiconductor field-effect transistor (MOSFET) has approached ~10-nm technology nodes over the past decade [2], RC delay and thermal consumption of metal interconnects have become serious problems retarding further improvement of the performance of Si-based microelectronic ICs [3]. Silicon-based optoelectronic ICs, which incorporate microelectronics and optical devices [4], have been proposed as an effective way to break the bottleneck [5]. To date, most of the components in Si-based optoelectronic ICs with high performance have been demonstrated [6,7,8], but a Si-based light source remains the biggest challenge for the indirect bandgap property of Si.
For its quasi-direct band structure and compatibility with Si architecture, germanium (Ge) is considered one of the most promising materials for a Si-based light source. Theoretical [9] and experimental [10] results have shown that the energy difference between the L and Γ valleys of Ge is about 140 meV at room temperature and can be further reduced under tensile strain leading to higher light emitting efficiency. N-type heavy doping is considered an alternative way to improve the light emitting efficiency of Ge [11,12], since more electrons can be injected into the Γ valley for n+ Ge under the same injection level compared to intrinsic Ge. Based on these two approaches, photoluminescence (PL) or electroluminescence (EL) [13,14,15,16,17] and even electrically pumped lasing [18] from Ge-on-Si material have been demonstrated. To further improve the light emitting efficiency of the material, SiGe/Ge multiple quantum wells (MQWs) with a Ge-rich (Ge fraction > 0.85) SiGe barrier, which forms a ‘type I’ heterostructure, have been proposed and demonstrated for the strong quantum confinement Stark effect (QCSE) [19,20,21,22]. However, most of the ‘type I’ SiGe/Ge MQWs were grown on a Ge-rich SiGe buffer by a strain-compensated method, which demands the average Si concentration in SiGe/Ge MQWs to be equal to the SiGe buffer, to achieve thick MQWs, resulting in compressive strain in Ge wells. To counteract the detrimental enlargement of energy difference between L and Γ valleys from the QCSE, tensile-strained Ge wells are preferable. So far, few results have been reported about the EL from tensile-strained SiGe/Ge MQWs [23].
In this paper, room temperature EL from six periods of tensile-strained Si0.13Ge0.87/Ge MQWs on a Ge virtual substrate (VS) is reported. Due to the competition effect of the tensile strain and the QCSE in Ge wells, the luminescence wavelength was hauled back at around 1550 nm for telecommunications. The optical properties of tensile-strained Ge wells under various injection currents and temperatures were studied and are discussed here in detail.

The materials for light emitting diodes were grown on an n-Si (100) substrate with a resistivity of 0.1~1.2 Ω·cm. After wafer cleaning with a modified RCA recipe, the substrate was degassed in a pretreatment chamber at 200 °C for 2 h. Next, the substrate was transferred to a cold-wall ultra-high vacuum chemical vapor deposition (UHVCVD) chamber with a base pressure of 4 × 10−8 Pa to remove the native oxide at 850 °C for 30 min. Disilane (Si2H6) and germane (GeH4) were used as a gas source for the deposition of Si and Ge atoms, respectively. A Si buffer layer was firstly grown at 750 °C to bury possible contaminators and imperfect lattices on an initial substrate surface. Next, a 90-nm Ge buffer layer was epitaxially grown at 320 °C to relax the compressive strain resulting from a lattice mismatch and to act as a seed layer. A high-quality Ge VS with a thickness of 340 nm was subsequently grown at 600 °C. After that, six periods of Ge/Si0.13Ge0.87 multiple quantum wells (MQWs) were grown at 600 °C and were finally capped by a Si0.13Ge0.87 layer with a thickness of 15 nm. The thicknesses of the Ge wells and SiGe barriers on Ge VS were 12 nm and 15 nm, respectively, and the Ge fraction of SiGe barriers was controlled by adjusting the flux ratio of Si2H6/GeH4. Details of the material growth have been described in previous reports [24,25]. The schematic diagram of the epitaxial structure on the Si substrate, corresponding X-ray diffraction (XRD) rocking curve, and Raman spectrum are exhibited in Figure 1a–c, respectively. Six orders of superlattice satellites can be observed in the XRD curve, indicating high crystal quality and sharp interfaces between Ge and SiGe layers. The strain in the Ge wells and Si0.13Ge0.87 barriers were extracted and are shown to be 0.17% and 0.71%, respectively.

The material was then fabricated into vertical diodes with double mesas. First, upper mesas with diameters of 100 μm were formed via standard lithography and selective reactive-ion-etch (RIE) of the Si0.13Ge0.87 cap layer, MQWs, and part of the Ge virtual substrate (VS). The bottom mesas with diameters of 166 μm were fabricated concentrically with the upper mesas via selective RIE of the Ge layer and part of the Si substrate. To obtain p/n junctions, selective phosphorous ion implantation into the upper mesas at 60 keV with a dose of 5 × 1015 cm−2 and BF2+ implantation into the bottom mesas at 30 keV with a dose of 5 × 1015 cm−2 were carried out after the deposition of a 15-nm SiO2 layer as a protective layer, respectively. The implanted ions were activated by rapid thermal annealing (RTA) at 650 °C for 30 s in a N2 atmosphere. A 300-nm SiO2 layer for passivation was then deposited via plasma-enhanced chemical vapor deposition (PECVD), and contact windows were opened by wet etching of the SiO2 with buffered-oxide-etchant (BOE). Finally, a 300-nm-thick aluminum (Al) layer was deposited by magnetron sputtering and patterned as electrodes. The top view image of the fabricated LEDs and cross-section structures are exhibited in Figure 2.

In summary, direct band electroluminescence (EL) from tensile-strained Si0.13Ge0.87/Ge multiple quantum wells (MQWs) at room temperature was reported herein. The MQWs were grown on a 0.07% tensile-strained Ge virtual substrate via a UHVCVD system. Electroluminescence from Γ1-HH1 transition in 12-nm-thick Ge wells was observed at around 1550 nm, as a competitive result of the quantum confinement Stark effect and the bandgap narrowing induced by tensile strain in Ge wells. As the injection current density increased, additional emission shoulders from Γ2-HH2 transition in Ge wells and Ge VS appeared at around 1300–1400 nm and 1600–1700 nm, respectively. The peak energy of EL decreased superquadratically with the increase in injection current density () due to the Joule heating effect of the injection current. At temperatures between 300 K and 350 K, the energy variation of band offsets between Si0.13Ge0.87 barriers and Ge wells can be neglected, while the energy difference between L and Γ valleys shrinks significantly during the elevation of temperature, resulting in the stronger EL intensity of the diode under constant injection current densities accompanied with a red shift of the peak position. Empirical fitting of the relationship between the integrated intensity (L) of EL and injection current density (J) with L~Jm shows that the m factor increases with injection current density, suggesting higher light emitting efficiency of the diode at larger injection current densities, which can be attributed to larger carrier occupations in the Γ valley and the HH valance band at higher temperature. 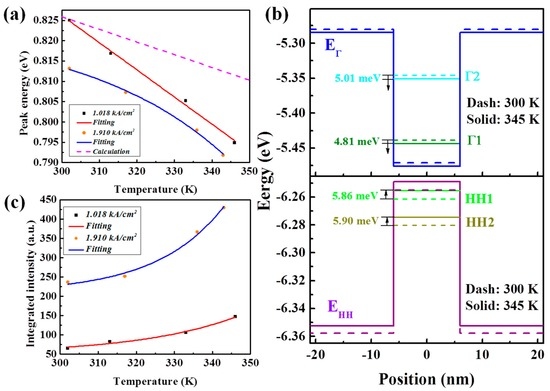 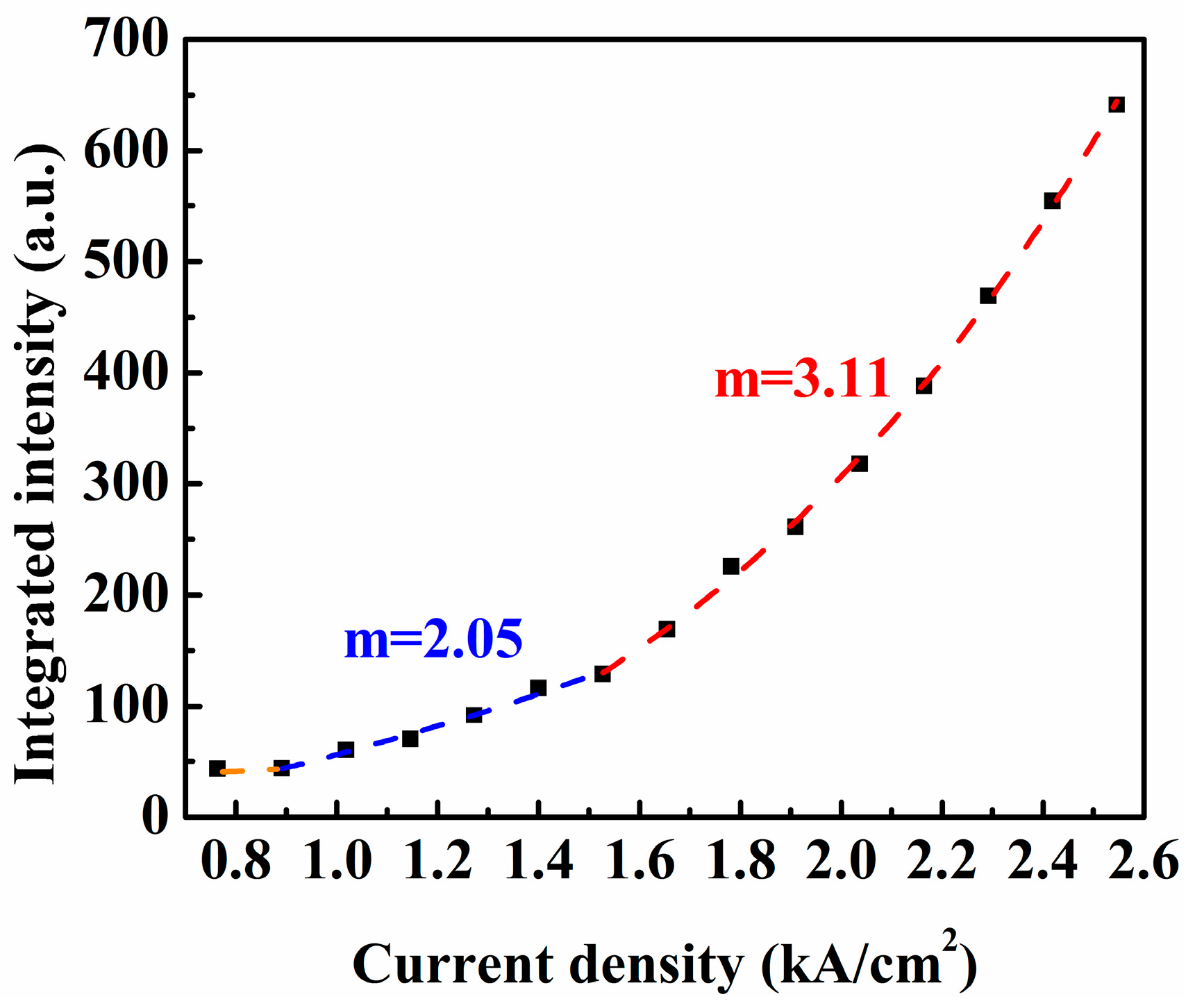