Inclined Fiber Pullout from a Cementitious Matrix: A Numerical Study

It is well known that fibers improve the performance of cementitious composites by acting as bridging ligaments in cracks. Such bridging behavior is often studied through fiber pullout tests. The relation between the pullout force vs. slip end displacement is characteristic of the fiber-matrix interface. However, such a relation varies significantly with the fiber inclination angle. In the current work, we establish a numerical model to simulate the entire pullout process by explicitly representing the fiber, matrix and the interface for arbitrary fiber orientations. Cohesive elements endorsed with mixed-mode fracture capacities are implemented to represent the bond-slip behavior at the interface. Contact elements with Coulomb’s friction are placed at the interface to simulate frictional contact. The bond-slip behavior is first calibrated through pull-out curves for fibers aligned with the loading direction, then validated against experimental results for steel fibers oriented at 30 and 60. Parametric studies are then performed to explore the influences of both material properties (fiber yield strength, matrix tensile strength, interfacial bond) and geometric factors (fiber diameter, embedment length and inclination angle) on the overall pullout behavior, in particular on the maximum pullout load. The proposed methodology provides the necessary pull-out curves for a fiber oriented at a given angle for multi-scale models to study fracture in fiber-reinforced cementitious materials. The novelty lies in its capacity to capture the entire pullout process for a fiber with an arbitrary inclination angle. View Full-Text
Keywords: fiber-reinforced concrete; pullout response; internal friction resistance fiber-reinforced concrete; pullout response; internal friction resistance
►▼ Show Figures 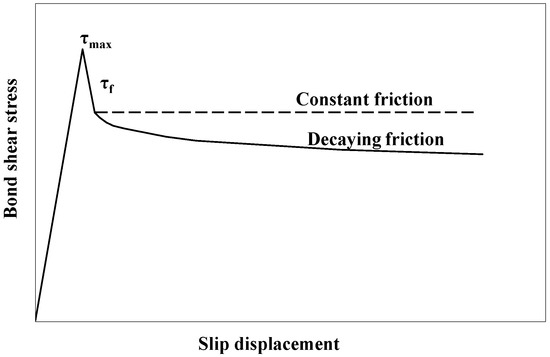