Tested tailing materials were obtained from an iron mine located in the northeastern region of China. Mill tailings are main ingredients of cemented tailing backfill, and physical properties (e.g., bulk density, specific gravity, porosity, the specific surface area, and the particle size distribution) and the chemical composition play key roles in the performance of cemented tailing backfill.
Based on the Specification of Soil Test (SL 237-1999) [32], the bulk density and special gravity of tailings were measured using the picnometer method (SL 237-005-1999) [32] and the relative density method (SL 237-004-1999) [32], respectively. Physical properties of tailing materials are shown in Table 1.

Table 1. Physical properties and particle size distribution of tailings.
As shown in Figure 1, the particle size distribution (PSD) was well graded, and d10, d50, and d90 of tailings were 25.07, 122.08, and 288.59 μm, respectively. The coefficient of uniformity of the particle size composition was 5.506. It should be noted that tailings satisfying backfilling requirements general refer to a coefficient of uniformity between 4 and 6 [33].
The main chemical elements of mill tailings are shown in Table 2. The proportions of metallic elements and related oxides (Fe, Al2O3, CaO, and MgO) were relatively high in unclassified tailings (8.85%, 4.59%, 6.78%, and 5.08%, respectively), and other metallic elements showed lower content in tailing samples. Nonmetallic elements and related oxides in mill tailings were mainly SiO2, S, and P (71.96%, 0.11%, and 0.07%, respectively), indicating that the low content of sulphide and phosphide had little damaging effect on the quality (e.g., strength deterioration) of cement-based backfill materials. 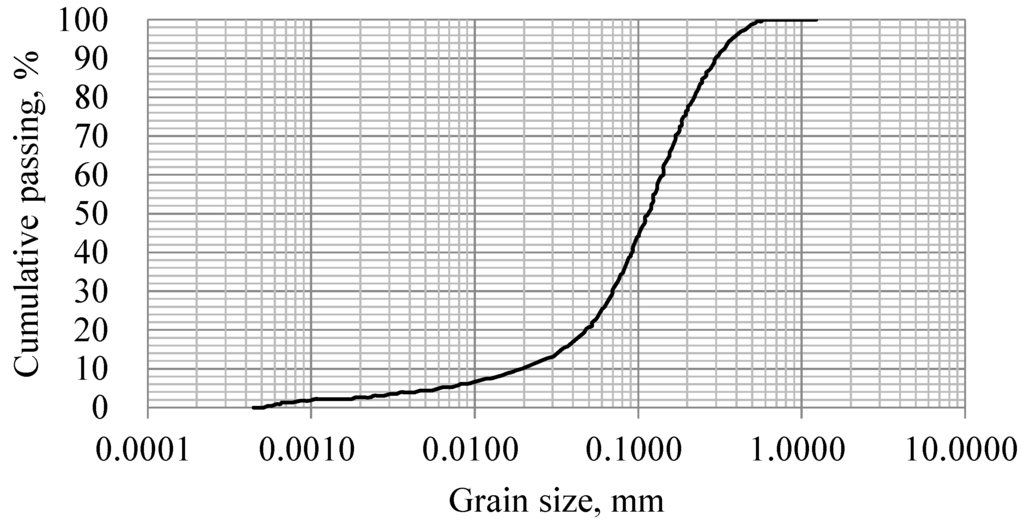 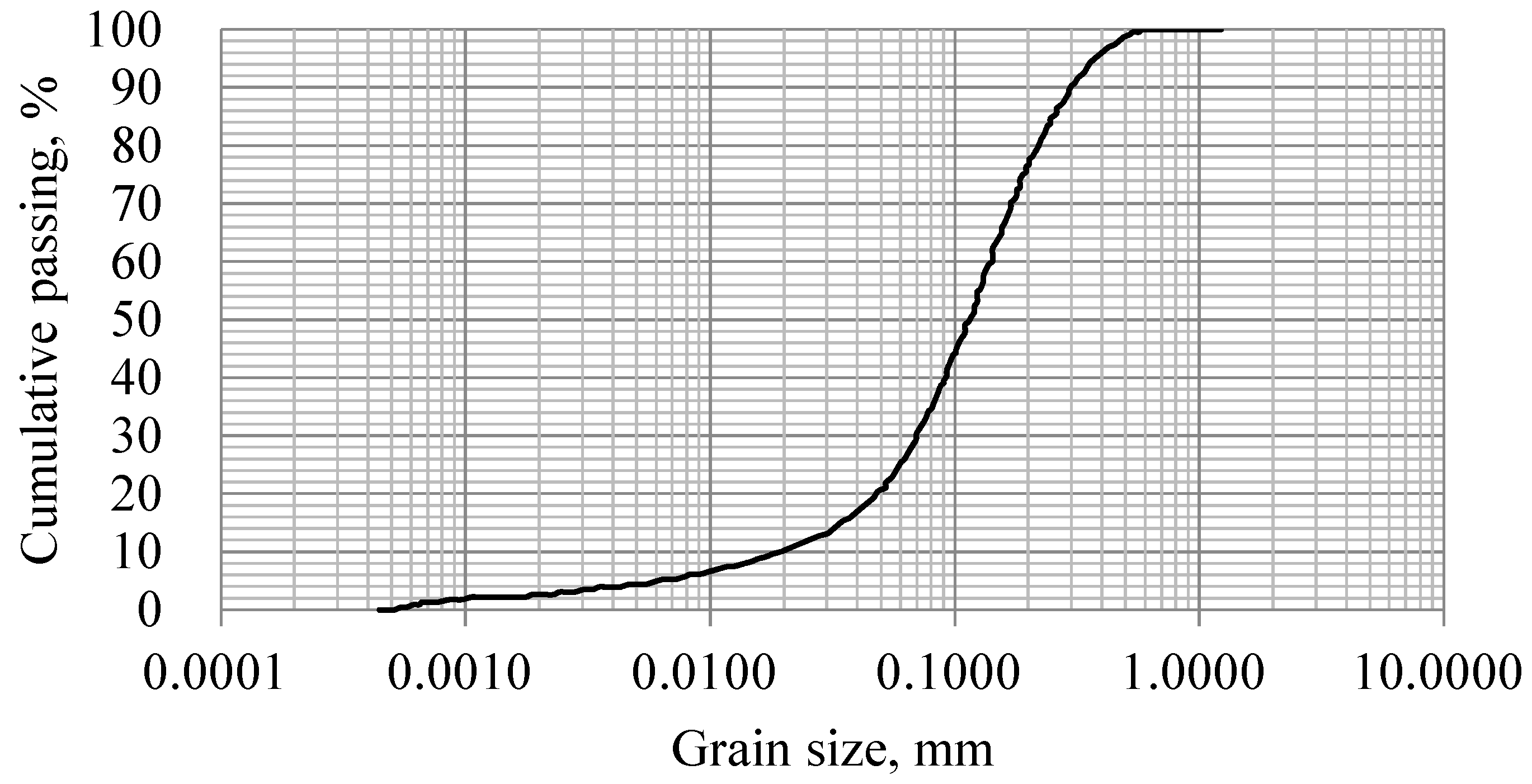 Table 2. Main chemical elements of mill tailings.
Based on X-ray diffraction, a mineralogical analysis was conducted (Figure 2). From the peak height of the XRD spectra, the major mineral elements of tailings were quartz, mica, and hematite, whose main chemical components were SiO2, Al2O3, Fe2O3, and K2O, and these analysis results are consistent with those in Table 2.

Portland cement (PC I) was used as the binder for cemented tailing backfill and was added to the mixture to increase the support potential. The main physical properties are shown in Table 3.

Water from the mine site was added to reach desired consistency, and the chemical properties of water used in cemented tailing backfill were taken into account during the mixture design because this was important for water selection as well as for its direct impact on the mechanical strength development of the backfill body. Table 4 shows the chemical composition of water used to prepare all sample mixtures. As shown in the table, there was a high level of sulphide, indicating a need to consider its effects on the backfill body.

3.1. The Background of the PCA Method

3.2. The Application of the PCA Method for Reducing Rheological Property Data

Although prediction models for rheological properties based on artificial intelligence methods have been introduced [17,18], correlations and overlaps between input data have been ignored, which can have unfavorable effects on the accuracy of prediction models. To overcome this limitation, the PCA method was adopted before constructing prediction models with the BP neural network. New input factors (principal components) were obtained by the orthogonal transformation of original input factors. The number of input factors was reduced effectively almost without any change in original information, and correlations between input factors were eliminated, improving the precision and efficiency of calculations.
Standardized preprocessing [34,35,36,37] was employed using the experimental results for rheological properties of cemented tailing backfill tabulated in Table 6. Then a Pearson correlation analysis was conducted to investigate the interrelationships between four input factors tabulated in Table 7. There were distinct correlations between the specific weight and solid concentration of cemented tailing backfill, as well as between the slump and the solid concentration, indicating the existence of some information overlap between input factors, and therefore the use of principle components was required.

Table 7. A Pearson correlation analysis of factors influencing rheological properties.
Note: ** Distinct correlations between input factors are in bold type.
Analyses were conducted using data in Table 6 based on SPSS (Statistical Package for the Social Sciences) and its PCA function, and principle components and scree plots were obtained. As shown in Figure 3, the X-axis shows principal components sorted by the decreasing fraction of the total variance explained, and the Y-axis shows corresponding eigenvalues. Based on the scree plots, there large differences in eigenvalues between PC-1 and PC-2 and between PC-3 and PC-4, indicating that the first two components of the rearranged information matrix included original information. Therefore, PC-1 and PC-2 were considered the most important indices, and PC-3 and PC-4 were considered non-significant indices. The scree plot was consistent with the cumulative contribution of the first two sets of data in Table 8. Despite some errors in the substitution of two sets of data in the rearranged information matrix for the original four sets of data, test data accounted for 98.634% of information in the original sample, produced reliable calculations, and enhanced computing efficiency because of a reduced number of factors. In addition, the results satisfy the requirement that the ratio of required information accounts for more than 75%–85% of original information in the PCA. Further, the results in Table 8 are consistent with Figure 3.

4. The Prediction of Rheological Properties of Mining Cemented Tailing Backfill

4.1. The Prediction Model Combining the PCA Method with the BP Neural Network

The BP learning algorithm can be divided into two phases: The transmission of operating signals (forward propagation) and the back-propagation of errors [38,39,40]. During the forward propagation of operating signals, the input signal propagates from the input layer through a hidden layer to the output layer, and the status of each layer of neurons influences only the next layer of neurons. If the output cannot be achieved in the output layer, then it should be switched to the back-propagation process of error signals. During the back-propagation of error signals, the error signal propagates from the output end to the input layer in a layer-by-layer manner, and the weight of the network is regulated by error feedback. With the adoption of the gradient descent method in the weighted vector space, the continuous modification of weight and offset values is applied during dynamically interactive searches, making the real output of the network closer to the expected one to achieve information extraction and memory, as shown in Figure 4.

Given a set of N samples (XK, YK) (k = 1,2, …, N) corresponding to the j-th unit in the l-th layer, the output of the j-th node with the input of k samples can be described as where represents the weight and represents the output of the j-th node in the (l−1)-th layer when the k-th sample is imputed.
The output of the l-th node can be expressed as such that the sigmoid function is adopted as the activation function f:
The error function can be expressed as where is the actual output of the j-th unit such that the total error can be calculated by
If , then the steps of the algorithm can be described as follows:
Step 1: The initial weight is assigned randomly.
Step 2: The following processes are repeated until , where is predetermined precision:
(i) Calculations for k = 1 to N:
The forward propagation of the input signal: , , and of each unit with k = 2, …, N;
The back-propagation of the error signal: of each unit in the hidden layer.
(ii) The weight correction:
First, a set of correlated variables is transformed into a set of linearly uncorrelated variables called principle components obtained from the PCA such that obtained variables are adopted as input variables in the BP neural network, as shown in Figure 5.

4.2. The Design and Training of the Prediction Model

The network topology and calculation procedures introduced in the previous section were adopted. X1 and X2 were employed as input factors, and the yield stress and viscosity of cemented tailing backfill were employed as output factors. Experimental data from the PCA tabulated in Table 10 were divided into two groups: A training data set (1–20) and a prediction sample set (21–24). For the construction of the prediction model, the learning rate and the momentum coefficient were set to 0.972 and 0.8, respectively.
A three-layer network was adopted in the optimization calculation such that the node numbers were 7, 15, and 2. MATLAB was used to obtain the prediction results tabulated in Table 11 and Table 12. The prediction error for the BP neural network model combined with the PCA method was less than 5%. In sum, the BP neural network prediction model combined with the PCA method clearly enhanced predictive accuracy in comparison to conventional ANNs with no PCA. The PCA method could identify the correlations between input variables and reduced the number of input variables, enabling the construction of an accurate prediction model.

Table 11. Comparisons of predicted yield stress between the PCA model and the non-PCA model.

Table 12. Comparisons of predicted viscosity between the PCA model and the non-PCA model.

The authors would like to thank the National Science and Technology Program of China (No.50490274) and the Scholarship Award for Excellent Doctoral Student granted by the Ministry of Education (No. 1343-76140000011) for their financial support. This research was also supported by the Basic Science Research Program through the National Research Foundation of Korea (NRF) funded by the Ministry of Science, ICT & Future Planning (No. NRF-2013R1A1A1060052). This work was supported by INHA UNIVERSITY research grant.

The authors of this paper declare no conflict of interest concerning the publication of the paper.