Fabrication of Diamond Based Sensors for Use in Extreme Environments

Polymers have a wide range of applications due to their inherent properties, such light-weight, strength, resistance to chemicals, thermal resistance, etc. Many processing techniques have been developed to advance the material properties and extend the range of applications. Multilayered polymers have been developed by coextrusion of polymeric systems [1]. The coextrusion technology was first developed by the Dow Chemical Company in the 1970s [2,3,4,5,6]. Multilayered polymers include microlayered and nanolayered polymer depending on the scale of the thickness of layers. Multilayered polymers have been reported to have improved mechanical properties, such as ductility and impact strength, as the layer thickness is reduced [7,8,9]. The microlayered polymer films have been successfully used in industrial applications, such as food packaging and coating [10,11,12]. The 3M Company adopted multilayered polymers for light management in mirrors and the screens of laptop computers. These types of polymer films have some unique properties in their applications. For example, the films can retain the aroma, flavor and freshness of food when used in food packaging. As the coextrusion techniques have advanced in recent years, innovative nanolayered polymer films have been developed, which have more complex hierarchical systems and a truly biomimetic nature [13,14]. There are many potential applications for the nanolayered films, such as gas barrier materials, next-generation flat-panel displays and spherical gradient refractive index (GRIN) lenses [15,16]. To mimic the structures of eyes in nature, polymer lenses made of nanolayered polymer film with GRIN distributions have been developed in recent years. The GRIN crystalline lenses in biological eyes, such as human being’s eyes, typically contain approximately 22,000 layers [17,18]. Layered polymeric optical lenses have been reported to have better optical properties than glass lenses and have been used to replace the traditional glass lens [17,18]. Some researchers have studied the physical and mechanical properties, such as transparency and flexibility, of the novel thin films, although the reports are relatively few [19,20,21,22].
Due to the intrinsic structure of polymers, the mechanical properties of the polymer films can vary widely depending on the material formulation, environmental temperature and time. To facilitate the application of polymers, the deterioration of the material over time, especially at elevated temperature, needs to be studied. We have previously carried out a preliminary investigation to experimentally study the impact of thermal aging on the mechanical behavior of the micro- and nano-layered polymer films [23]. However, in the previous study, all of the films have various layer thicknesses and film thicknesses. This makes it hard to study the effect of layer thickness and film thickness on the change of properties after aging separately. In the current study, the films have either the same film thickness with various layer thicknesses or the same layer thickness with various film thicknesses. This way, the effect of film and layer thickness on the aging of the film can be studied independently. The effect of aging temperature on a specific nanolayered film has also been studied.
The composition of the polymer films under study is 50 vol% polycarbonate (PC) and 50 vol% poly(methyl methacrylate) (PMMA). The layer thickness ranges from 31 nm to 1,984 nm with a 5-μm film thickness and a film thickness of 31.8 μm to 508 μm with a 496-nm layer thickness. These films were thermally aged at 100 °C in a constant temperature oven for up to six weeks. Their mechanical properties, including the modulus of elasticity, tensile strength and ductility, were compared. It has been observed that the thermal aging temperature and aging time have significant effects on the overall character of the stress-strain responses, and layer and film thickness play important roles. The films with 4,096 layers (31 nm thick for each layer) were aged at 100 °C, 115 °C and 125 °C for up to four weeks to study the effect of aging temperature. It has been observed that the film with a 31-nm layer has relatively stable mechanical properties. The microstructural scale level contributes to the material mechanical properties, such as the mechanical stability and durability. The microstructural features start to play a role as the layer thickness reduces to a certain level, which is very important for applications, such as in GRIN lens designs.

The multi-layered polymer films under study were fabricated with the unique layer-multiplying coextrusion process at Case Western Reserve University. The film sample is shown in Figure 1. The process combines 50 vol% PC and 50 vol% PMMA as perfectly alternating layered systems. The films with various layer thicknesses are shown in Table 1 and films with various film thicknesses in Table 2. The room temperature modulus of elasticity, tensile strength and fracture strain (as a measurement of ductility) of the films were studied with static tension tests using an Instron 4467 instrument in tension mode fitted with film tension grips. The film samples were prepared and tested as directed by ASTM D882. Samples for the tension test were approximately 6 in (152 mm) long and 0.2 in (5 mm) wide. The gage length was approximately 4 in (102 mm). To study the effect of thermal aging, these films were aged 100 °C in a constant temperature oven for up to six weeks. Samples were removed from the oven at aging times of 3 days, 1 week, 2 weeks, 3 weeks, 4 weeks, 5 weeks and 6 weeks (42 days) and tested. The test matrix and sample numbers for each test are listed in Table 3. The test matrix was designed to test about 11 samples for each type of film for aging times up to 42 days. Film samples with 0 days of aging are pristine samples without any aging. Type 4 films were aged to 115 °C and 125 °C. Five samples were removed from the oven at each aging time of 3 days, 1 week, 2 weeks, 3 weeks, 4 weeks, 5 weeks and 6 weeks (42 days) and tested. Note that films with an aging temperature of 125 °C and an aging time of 2 weeks or longer could not be used for the tension test. These films became warped and very brittle after removing from the oven. 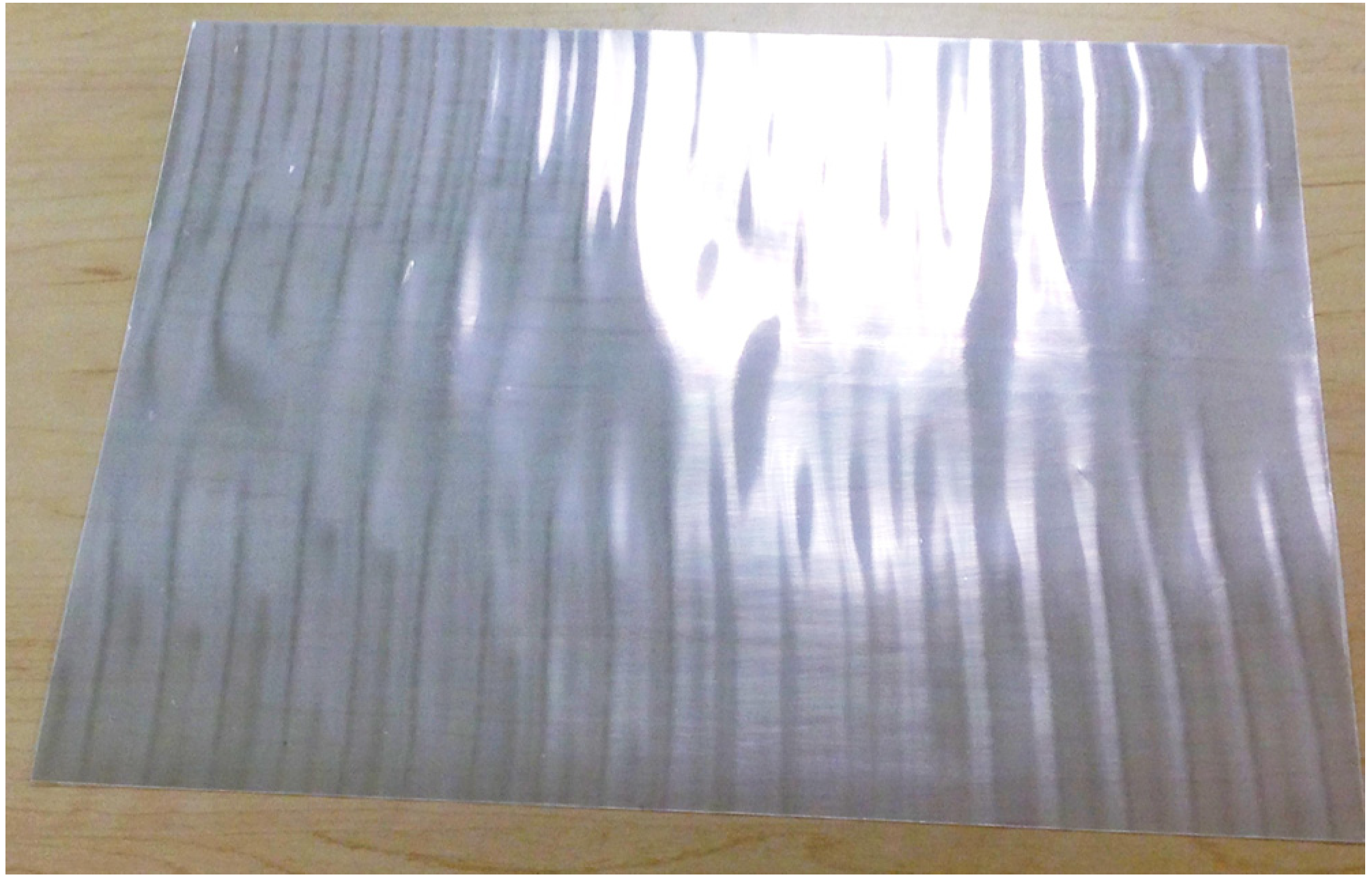 Table 1. Films with various layer thicknesses.
* mil is a thousandth of an inch.

Table 3. Test matrix showing sample numbers at each aging time for testing for each sample type at 100 °C aging temperature.
The modulus of elasticity was determined from the early linear portion of the stress-strain curves; tensile strength was determined from the maximum stress of the curves; and the fracture strain was the strain when the films finally broke. Film samples in Table 3 were tested, and the data are reported in the next section.

3.1. The Effect of the Layer Thickness 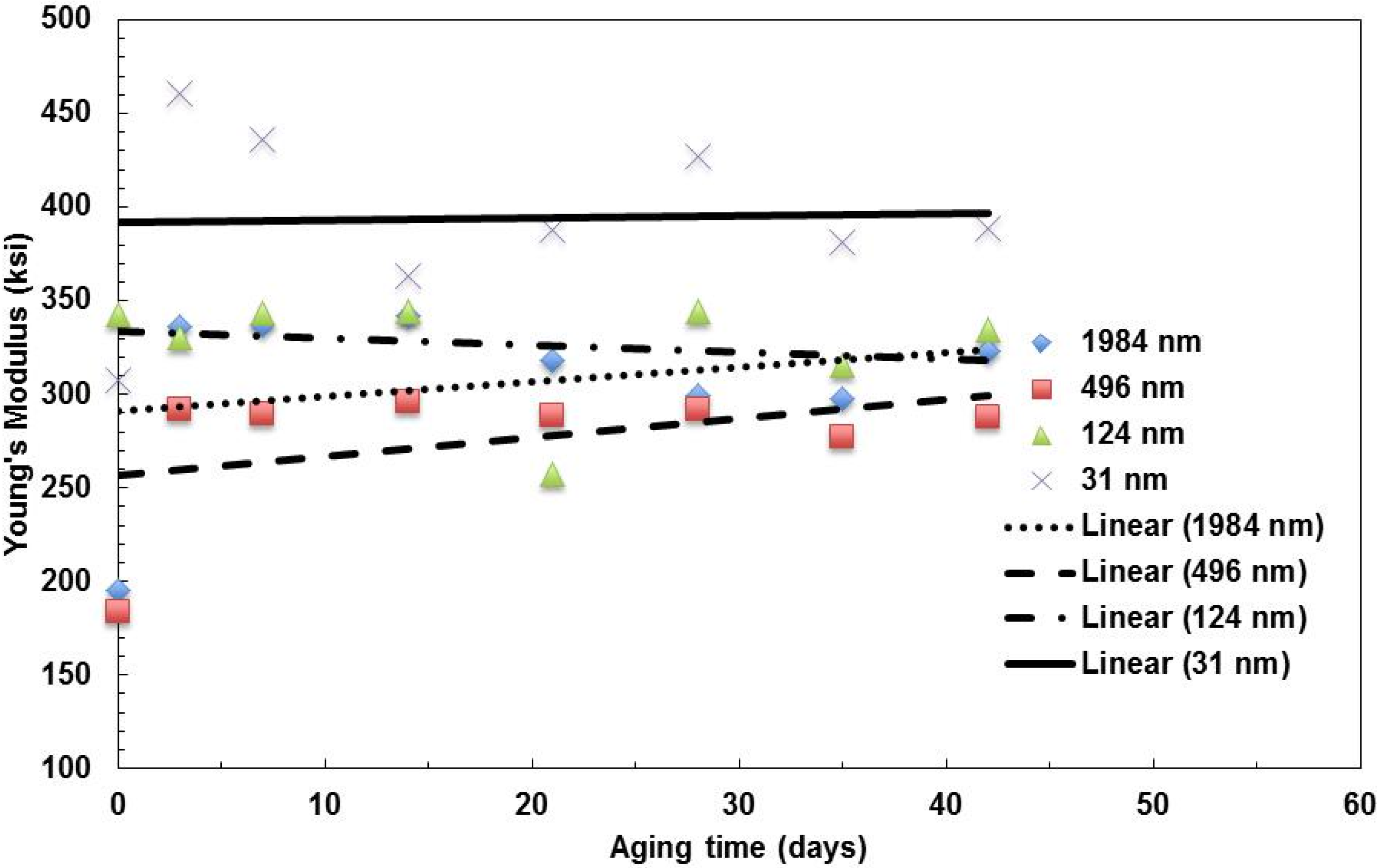 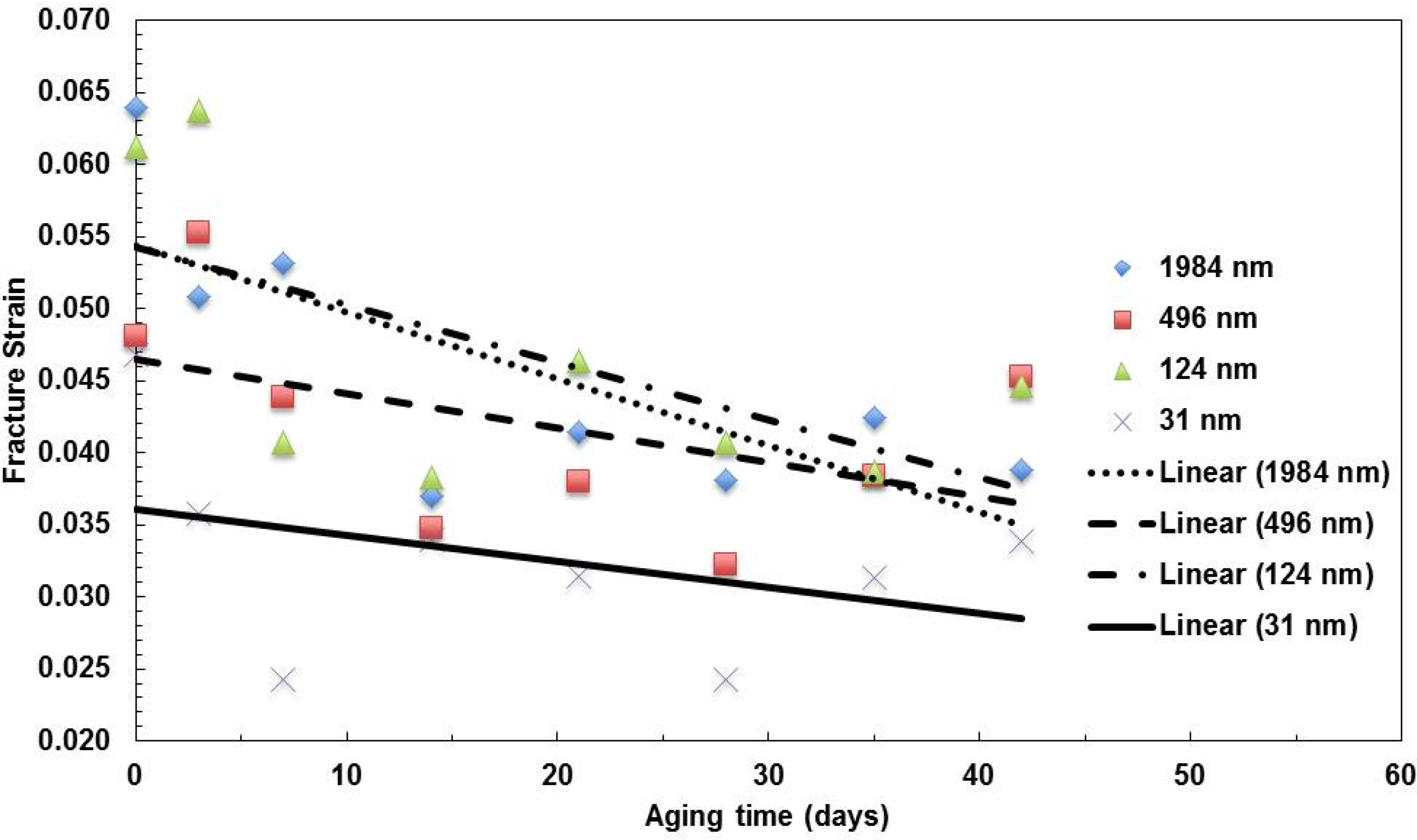 3.2. The Effect of the Film Thickness 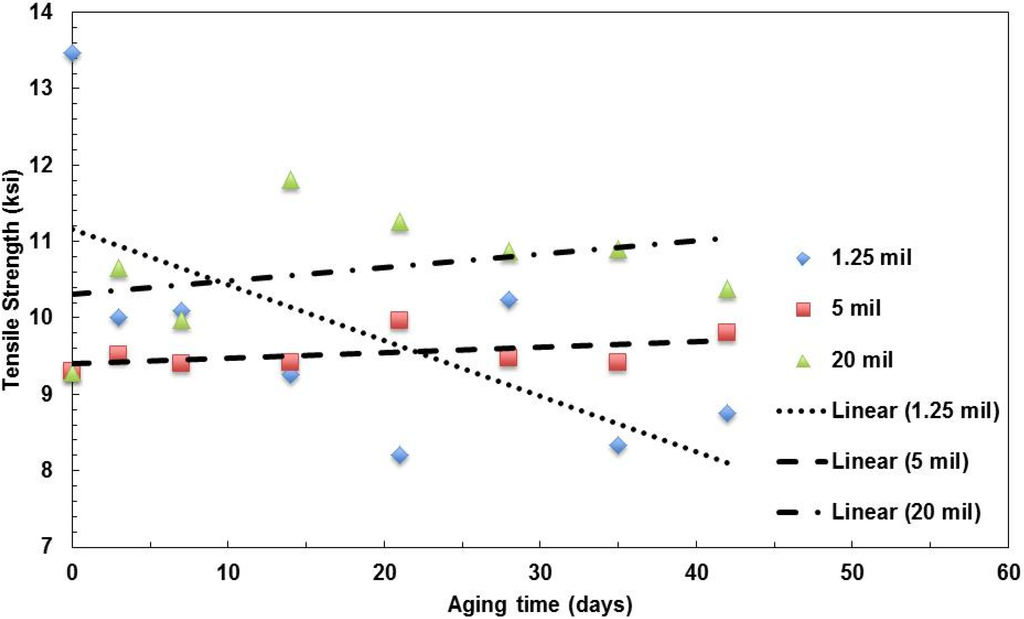 The fracture strains of the films are shown in Figure 7. The ductility of the three films decreasing with aging time shows the degradation of the polymer films. 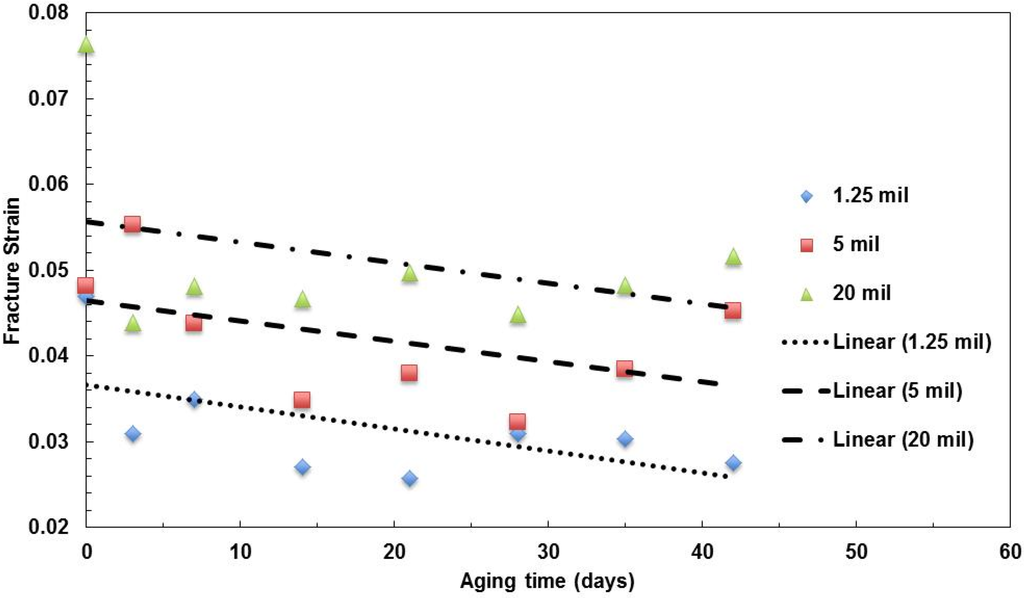 3.3. The Effect of the Aging Temperature

The effect of temperature was studied for the nanolayer film with 4,094 layers of 31-nm thick (Type 4 film in Table 2) at temperatures of 100 °C, 115 °C and 125 °C. While the samples for the aging tests at 100 °C are not from the same batch as the sample for the 115 °C and 125 °C tests, the mechanical properties are not the same for the pristine (original) films. To compare the trend of films from different batches, all of the data were normalized by the pristine material properties. That is, all of the pristine properties are one for zero days without aging. The moduli of elasticity of the aging at three temperatures are shown in Figure 8, from which it can be observed that the trend for the stiffness stays relatively stable over aging time for all three temperatures. The aging at 100 °C has a higher average moduli than the other two. 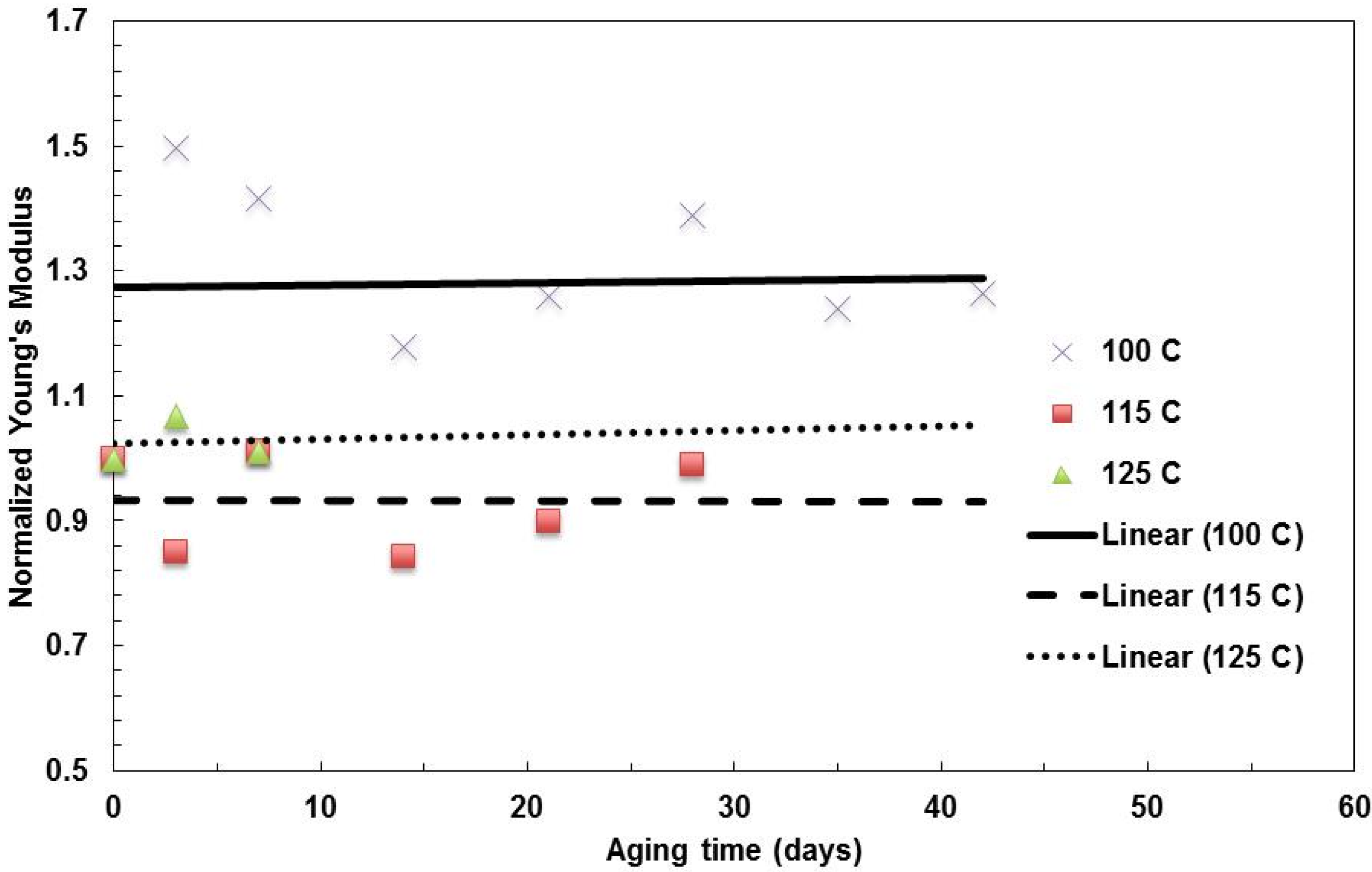 The tensile strengths of the films are shown in the Figure 9. While the aging resulted in a noticeable decrease for the 125 °C aging, there is no obvious change for the 100 °C aging for the film. The 115 °C aging cause a slight decrease of the property.

The fracture strains for all three aging temperatures are shown in Figure 10. As all of the films lost ductility during aging, the higher the temperature and the longer the aging time, the more brittle the films become over aging, which indicated the greater degradation of the nanolayer films.

In this paper, the effects of layer and film thicknesses and thermal aging on the PC/PMMA micro- and nano-layered films have been studied experimentally. It is observed from the results that the material layered structure has a great effect on the mechanical properties and aging. For the films with the same film thickness, but various layer thicknesses, as the layer thickness goes down to 31 nm, the film has higher stiffness and strength than other films with thicker layers. Meanwhile, the stiffness and strength stay stable with the aging time. As the layer becomes very thin, down to the nanoscale, the confinement from the layer boundaries holds the molecules, makes the molecules more tightly packed and, finally, aligned. The aligned molecules have more inter-molecule van der Waals force, which makes them lock tighter to make the material deteriorate more slowly. As the layer thickness stays the same, the stiffness and strength of thinner films decrease with aging time, but for the relatively thicker films, stiffness and strength increase with the aging time. The aging temperature has a great effect on the strength and ductility for the 31-nm nanolayered film. For all of the films, the thermal aging results in a noticeable reduction in the ductility of the films. The higher temperature results in a high loss of the ductility. The findings of this research work demonstrate the breakthrough of the technology to make nanolayered polymer materials not only increase their stiffness and strength, but also increase their stability and durability. While a major limitation of polymer films is the deterioration of mechanical properties in working environments, this finding would be important for the application of the polymer films.

The authors acknowledge the financial support of the National Science Foundation through Grant Number DMR-0423914 and the materials provided by Eric Baer at Case Western Reserve University. 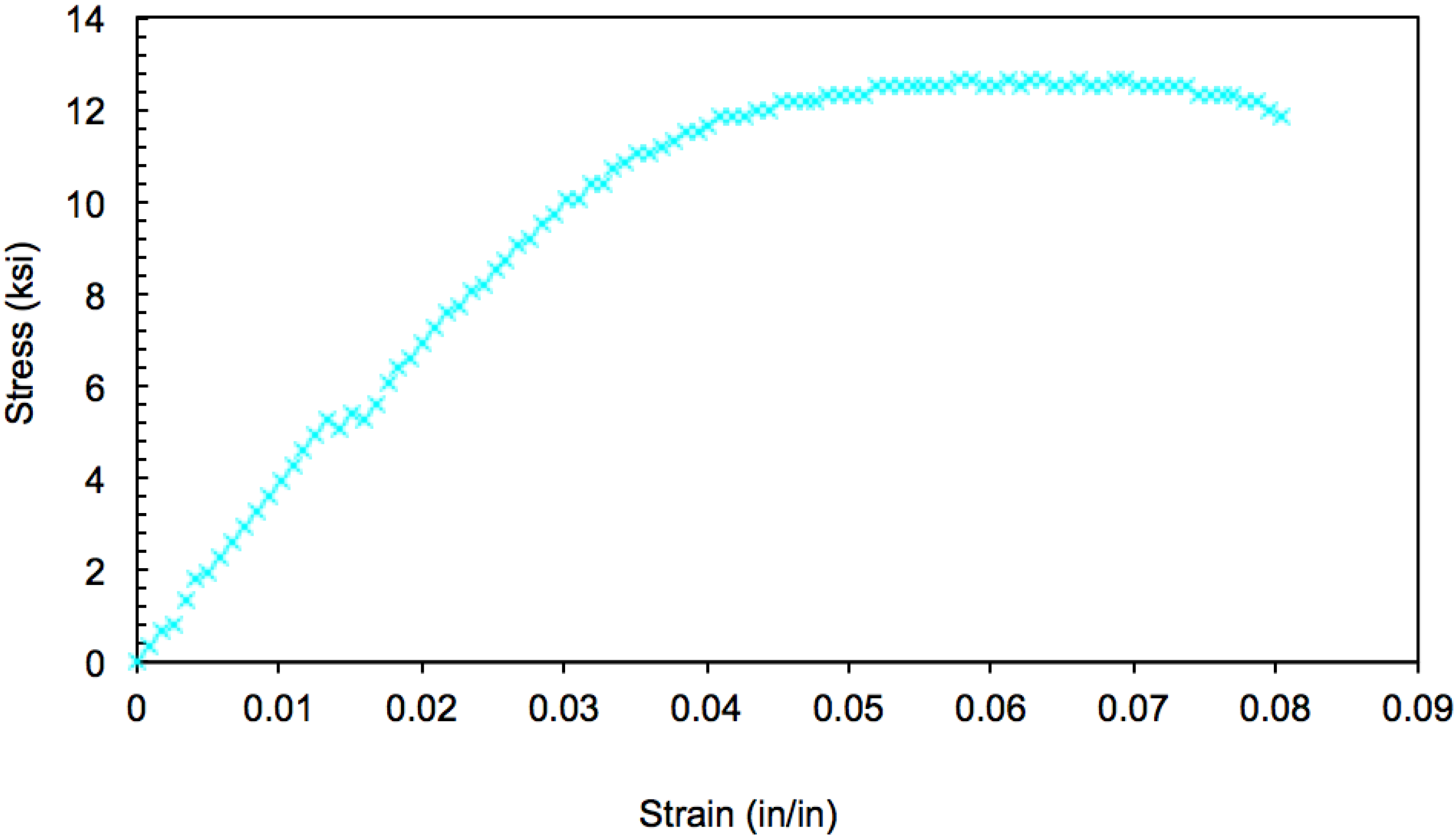 Table A1. The modulus of elasticity (unit: ksi) vs. aging time at a 100 °C aging temperature for film Types 1–4, which have the same film thickness (5 mil), but various layer thicknesses.

Table A2. Tensile strength (unit: ksi) vs. aging time at a 100 °C aging temperature for film Types 1–4, which have the same film thickness (5 mil), but various layer thicknesses.

Table A3. Fracture strain vs. aging time at a 100 °C aging temperature for film Types 1–4, which have the same film thickness (5 mil), but various layer thicknesses.

Table A4. modulus of elasticity (unit: ksi) vs. aging time at a 100 °C aging temperature for films with the same layer thickness, but various film thicknesses.

Table A5. Tensile strength (unit: ksi) vs. aging time at a 100 °C aging temperature for films with the same layer thickness, but various film thickness.

Table A6. Fracture strain vs. aging time at a 100 °C aging temperature for films with the same layer thickness, but various film thicknesses.