Calcium phosphate (CaP) cements are used as bone replacement materials and by composition are classified into (i) apatite cements; (ii) apatite-forming cements; and (iii) dicalcium phosphate dihydrate (brushite) cements [1]. There are a variety of CaP compounds that exist (Table 1) and in the fields of maxillofacial and orthopedic surgery, many CaP materials and compounds have gained clinical acceptance for use in bone repair, regeneration, and augmentation applications [2,3,4]. In dental applications, CaP cements are used for periodontal bone defect filling, immediate implant placement, augmentation of deficient alveolar ridges, maxillofacial reconstruction, sinus lift procedures and coatings for dental implants [4,5,6,7,8,9]. The medical applications include but are not limited to spinal fusion, cochlear implants, fracture and bone defect repair, and coating for orthopedic implant devices [10,11,12].

Table 1. List of existing calcium phosphate compounds [1,13,14,15,16,17].
For successful bone tissue engineering, it is crucial for the implanted graft materials to have appropriate cellular affinity along with degradation potential. The materials should also have sufficient mechanical strength allowing bone remodeling within a three-dimensional porous structure [18]. The materials should also be fully degradable and this degradation should ideally match with the osteogenic rate [19,20]. A requirement for bone regeneration is the recruitment or presence of osteoblast precursors and growth factors at sites of augmentation. Osteoblast precursors can be provided by the graft material (cancellous autogenous grafts) or by the recipient bed [21]. The early phase of bone regeneration is dominated by active bone resorption and formation throughout the graft. The latter phase of incorporation is characterized by osteoconduction and a process known as creeping substitution (Figure 1) [22,23]. Many of the bone graft materials used today are able to contribute to new bone formation through this biological process [24]. 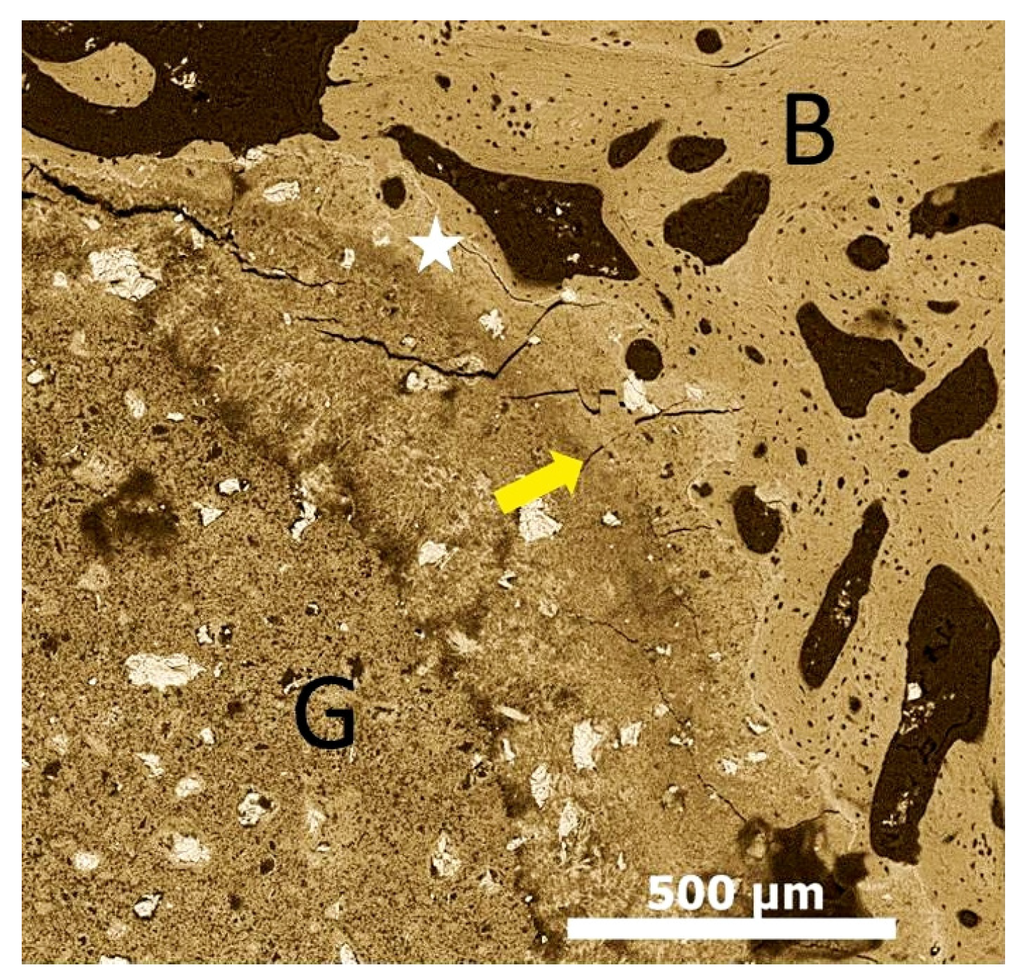 After implantation, biodegradation is critical as this allows for the space to be formed into which the bone and vascular tissues can grow. Biodegradation can be envisioned as an in vivo process by which (i) a material breaks down into simpler components, reducing the complexity of chemical compounds by the action of biological systems (cells); (ii) by simple physical breakdown; and/or (iii) chemical erosion [3]. The biological systems can regulate biodegradation via enzymatic or cellular mechanism. The physical breakdown is usually due to passive dissolution of ions and/or disintegration/particulate fragmentation due to loss in mechanical integrity of the implants [2,25]. The chemical alterations in the environment around the implanted materials result in pH level elevation or decrease and can potentially cause erosion. The physical characteristics, chemical composition, crystal structure, and site of implantation play an important role in the biological behavior of CaPs [26,27].

2. In Vivo Degradation and Resorption of Calcium Phosphates

For clarity, the term “degradation” represents the physical process of disintegration and fragmentation, whereas, the term “resorption” essentially signifies biodegradation taking place via cellular mechanisms. Biodegradation of CaP based biomaterial is thought to take place via solution-driven extracellular liquid dissolution and cell-mediated resorption processes [28]. The fate of implanted CaP biomaterials is dependent on various mechanisms and processes (Figure 2).
The solubility of the implanted CaP materials heavily affects the dissolution (Table 1) [2,28]. Whereas the disintegration and fragmentation is regulated by the solubility of the necks connecting the particles of cement powder after crystallization [28]. It is believed that the cell mediated CaP resorption (phagocytosis by macrophages) is due to the particle formation as a result of disintegration. Monocytes/macrophages are among the first cells to colonize the biomaterial surface after implantation and play a crucial role in biodegradation [29].

Biomaterial particles that are generated interact with immune cells (e.g., polymorphonuclear neutrophils and monocytes), leading to cell activation and the release of inflammatory mediators [30,31]. The macrophages or giant cells encounter the CaP particles, attach, and get activated to endocytose [28]. The particle size of the CaP materials implanted affect the rate and effectiveness of cellular resorption activity [32]. The cells that take part in cell-mediated CaP resorption may be osteoclasts, multinucleated giant cells, monocytes, and macrophages directly available in the bone marrow tissue. Phagocytic mechanisms regulated by the monocytes/macrophages or acidic mechanisms via osteoclasts (by reduction of pH in the microenvironment) result in bioresorption of CaP cements in vivo [33]. Macrophages respond to small fragments and particles (<10 μm in diameter) by internalization via phagocytosis and intracellular digestion (Figure 3). If the particle size is larger than 10 μm and smaller than 100 μm, the macrophages fuse together forming giant cells which in turn engulf the particles and digest them (Figure 3) [34]. If the particles are larger, the bulk digestion is carried out via extracellular degradation by macrophages and macrophage-fused giant cells through release of enzymes and/or pH lowering mechanisms (Figure 3) [34,35].
Various other cell types such as mesenchymal cells (fibroblasts) present at the implantation site can induce CaP cement solubilization via crystal-cell contacts [33]. Numerous studies have discussed cell mediated resorption of CaPs [28,36,37]. It is seen that for rapidly resorbing cements, it is the macrophages and giant cells that participate actively in the resorption process [38]. In contrast, the slow resorbing cements, osteoclast-type cells are mostly responsible for the cement matrix degradation in vivo [37]. Although macrophages loaded with cement particles can be observed throughout the implantation time, they are more prevalent in the resorption zone near the cement border [39].
Multinucleated giant cells have been shown to have a limited capacity to resorb the calcified matrix of the CaP cements [40]. Basle et al. have demonstrated that implanted CaP bioceramics induce the recruitment of two multinucleated populations able to degrade the biomaterial implants [41]. The first type associated with the inflammatory reaction (macrophage-polykaryons) intervene immediately after implantation and then disappear. The second type are osteoclasts (corresponding to physiological polykaryons) and are involved in resorption of the calcified cement matrix. The recruitment of this population of cells occurs progressively after implantation [33]. 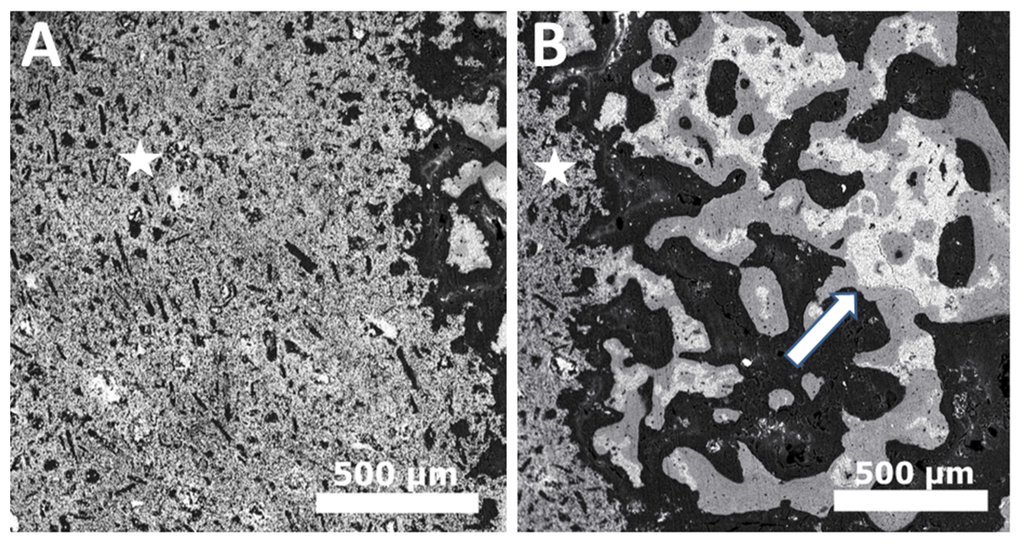 An ideal scaffold for bone tissue engineering application should provide initial support for osteoprogenator cells which deposit bone matrix that gets mineralized. For this to happen, the scaffold material should resorb slowly at the same time allowing for the newly forming bone to infiltrate and grow within the scaffold. The degradability and resorption of CaP based biomaterials is not exempt from these requirements if they are to be used with success in clinical situations. The in vivo degradation of CaP materials is dependent on the physio-chemical and cellular mechanisms and processes. It can be concluded that a combination of cement dissolution, disintegration, and fragmentation/particle formation followed by phagocytosis through macrophages and osteoclast mediated resorption is responsible for the biodegradation and bioresoprtion of CaPs when implanted in vivo. Despite extensive research being conducted, we still do not have a perfect grafting material. Although, CaP have adequate working and setting time, excellent biological properties and the ability to deliver various bone formation enhancing proteins and molecules, they lack adequate mechanical properties and the controlled degradability which is required. Some CaP compounds demonstrate greater biodegradability after implantation than others which can be attributed to the physical characteristics and phase conversion phenomenon to less soluble substrates. The approach required is to develop and use specific CaPs for applications that they are useful for. Further research is required to not only understand the degradation processes of CaP cements better, but also to fine tune the degradation profiles to improve their clinical usefulness and success.

No funding sources to disclose.