Numerical Analysis of the Bending Properties of Cathay Poplar Glulam

Modern wooden structures have been used in many areas around the world. Glued-laminated timber (glulam) is a type of engineered wood product that can preserve the natural beauty of the source wood during construction [1,2]. Structural glulam has been widely used in Japan, North America and Europe [3], but Chinese domestic wood species are rarely used in the construction of structural glulam manufactured in China. It is thus important to study Chinese domestic wood species that could be applicable for use in structural glulam.
Cathay poplar (Populus cathayana) is one of the most abundant, fast-growing species in northern China and is cold resistant, fast growing, straight grained, medium and evenly textured and easy to manufacture. Cathay poplar is thus an excellent material for construction components [4,5].
Finite element analysis (FEA) is an efficient research method used in the wooden materials field. By establishing a finite element analysis model and post-processing, visual predictions can be obtained without specimen failures. In 1980, Foschi and Barrett put forward the Foschi-Barrett simulation model, which used the Monte Carlo method, to predict the Modulus of Rupture (MOR) of glulam. The Ala Tabiei [6] model simulated the nonlinearity of wood, and the Moses D.M. [7] model predicted the nonlinear deformation and brittle fracture of wood composite material. The Serrano [8] model is also a three-dimensional nonlinear FEA model, which predicted the properties of the glue layer, the size effect and tensile fracture properties when the wood was connected with bolts. Gao [9] proposed the FEA model of the deformation of timber-framed plywood panel dome structures, and the simulated results were found to be in good agreement with the results of the experiments under similar loading conditions. Frese [10,11,12] simulated the bending and tensile strengths of spruce and beech glulam. Qiu [13] simulated the crack propagation behavior of Chinese larch, and the numerical results correlated well with the experimental results. Based on the stiffness profile of each board and its location within the glulam, Kandler [14] established a numerical finite element model, which is able to predict the effective glulam stiffness with high accuracy.
The formula model is also commonly used to make numerical simulation of glulam. Kohler [15], Fink [16,17] and Jockwer [18,19,20] have published contributions about the formula model. Kohler presented a probabilistic approach for modelling the tensile strength and tensile stiffness properties of timber boards and finger joint connections of knot clusters based on the results of the experimental investigation. Fink presented a probabilistic approach for modelling the load-bearing capacity, the bending stiffness and the failure modes of glulam. In Jockwer’s research, the prediction of the load-carrying capacity of notched beams was developed based on experiments and theory, and the load at initial cracking of the reinforced notches tested can be predicted with the model. Besides, the impact of knots and grain deviations on the fracture perpendicular to the grain of timber is analyzed by means of numerical models.
The Modulus of Rupture (MOE) and MOR are both paramount properties of glulam. Four formulae were derived, and finite element analysis models were established to predict the MOE and MOR of Cathay poplar finger-jointed glulam. In addition, the bending properties of Cathay poplar glulam were examined and compared to those of Douglas fir glulam. A comparison of the test and simulation results was also performed.

Cathay poplar was obtained from the Beijing Longshun Wood Market, Beijing, China. Douglas fir was imported from North America (Can-Coast Development Corp, Vancouver, BC, Canada). The moisture content of the Cathay poplar and the Douglas fir ranged from 9% to 12%. The physical and mechanical properties of the Cathay poplar and Douglas fir lumber are shown in Table 1. Resorcinol formaldehyde resin adhesive (RF, Prefere 5837W, Dynea, Gaoyao, Guangdong, China) and one-component polyurethane adhesive (PU, HB S309, Purbond, Shanghai, China) were used to manufacture the glulam specimen. The resin content of RF and PU is 100% and 45%~75%, respectively; the curing time of RF and PU is 75 min and 60 min, respectively.

Table 1. Mean physical and mechanical properties of the lumber investigated in this study. 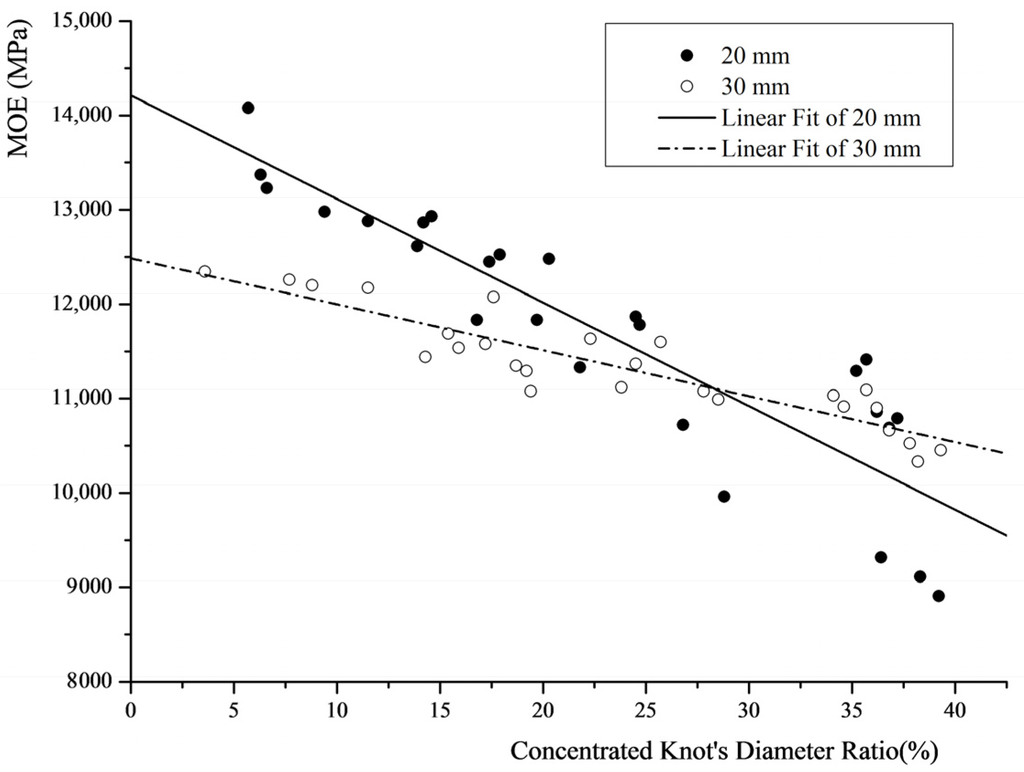 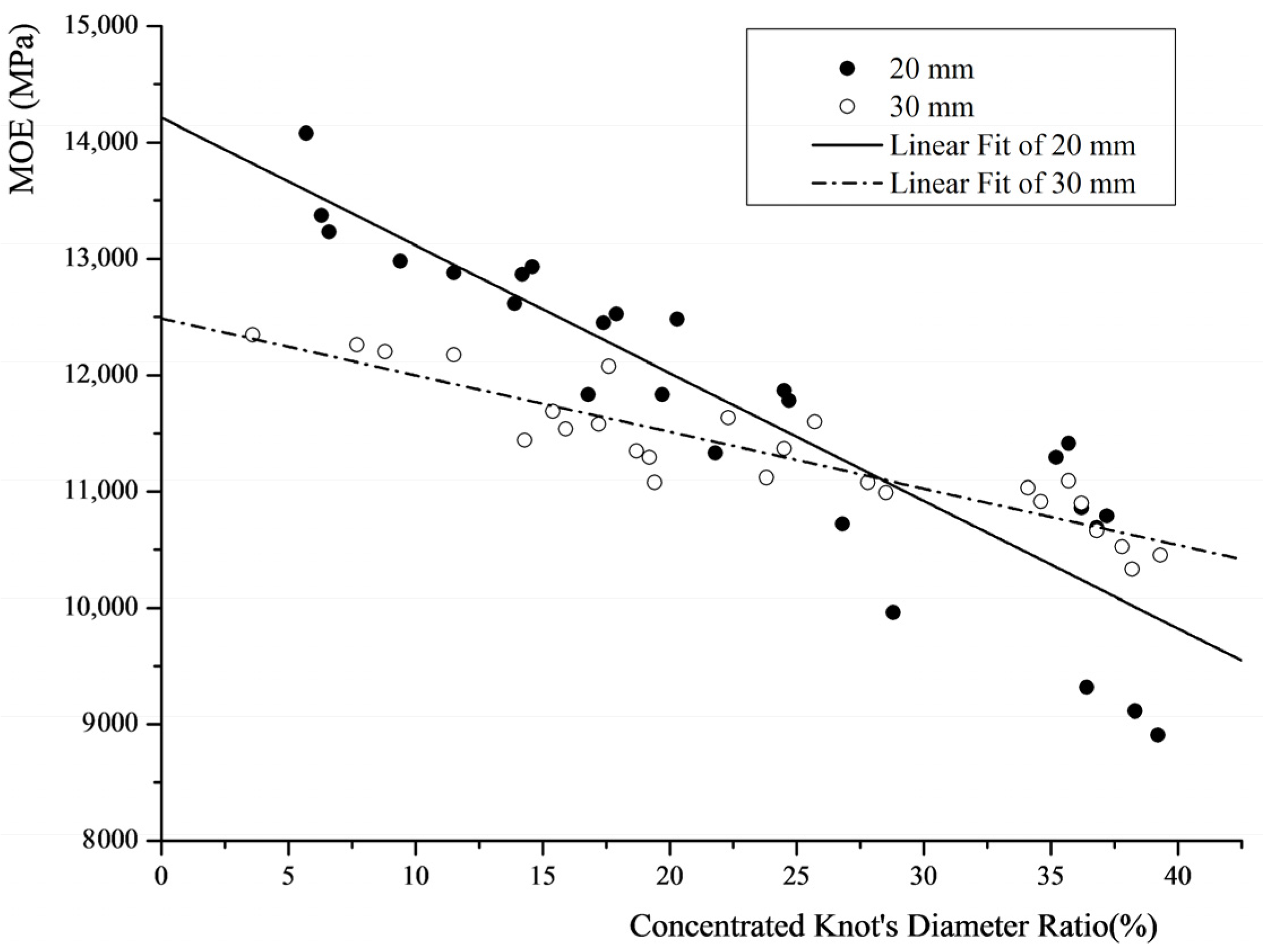 Glulam specimens were manufactured based on GB/T 26899-2011. All of the glulam specimens were 3000 (L) mm × 60 (W) mm × 120 (T) mm. The length of finger joints was 21.5 mm, and the width was 8.0 mm. The distribution of finger joints in glulam satisfies the construction requirement of glulam. The positions of finger joints were at least 30 cm away from each adjacent layer.
The specimen parameters are shown in Table 2. To improve the bending strength of glulam [22], Grades I and II lumber were placed on the outermost layers of the 4-layer glulam and the outermost and outer layers of the 6-layer glulam. Grade III lumber was placed on the inner layers (Figure 2).

A four-point load static bending test (i.e., bending test Method A) was performed based on GB/T 26899-2011 at a loading speed of 8 mm/min. An LVDT (Linear Variable Differential Transformer) sensor was set at the midspan of each specimen. (Figure 3). The MOE for bending and MOR are calculated by the following Equation: where is the difference between the upper and lower loads at the proportional limit, l is the span of the specimen between supports, s is the span of the specimen between the loading points, Δy is the corresponding midspan deflection of , b is the width of the specimen, h is the depth of specimen and Pmax is the maximum load.

Elastic deformation occurred in the specimens during the initial stage of loading. As the load increased, plastic deformation occurred in the specimens. At this stage, many small compression wrinkles appeared in the specimens. The bending rigidity of the specimen decreased marginally, and the deformations increased significantly. Finally, the bottom laminates reached their ultimate tensile stresses. The finger joints of the bottom laminate or defects in the timber failed first, which led to brittle failure of the specimen. The three typical failure modes observed are shown in Figure 4.
The failure modes were connected to the finger joint to some degree. Structural glulam requires a large number of finger joints, so studies of finger joint fatigue strength are very important [23]. There are quite a few research works aimed at the relationship between the bending strength of glulam and finger joint strength.

The load displacement curves of the mean value of the specimens from each series are shown in Figure 5 as solid lines, and the single results are shown as dotted lines. Compared to the Douglas fir glulam, the Cathay poplar glulam has a lower stiffness, but a slightly higher strength. The PU is shown to be more effective than the RF when used to glue the Cathay poplar glulam specimens. With the same thickness, the strength of the specimen increased when the number of layers increased. 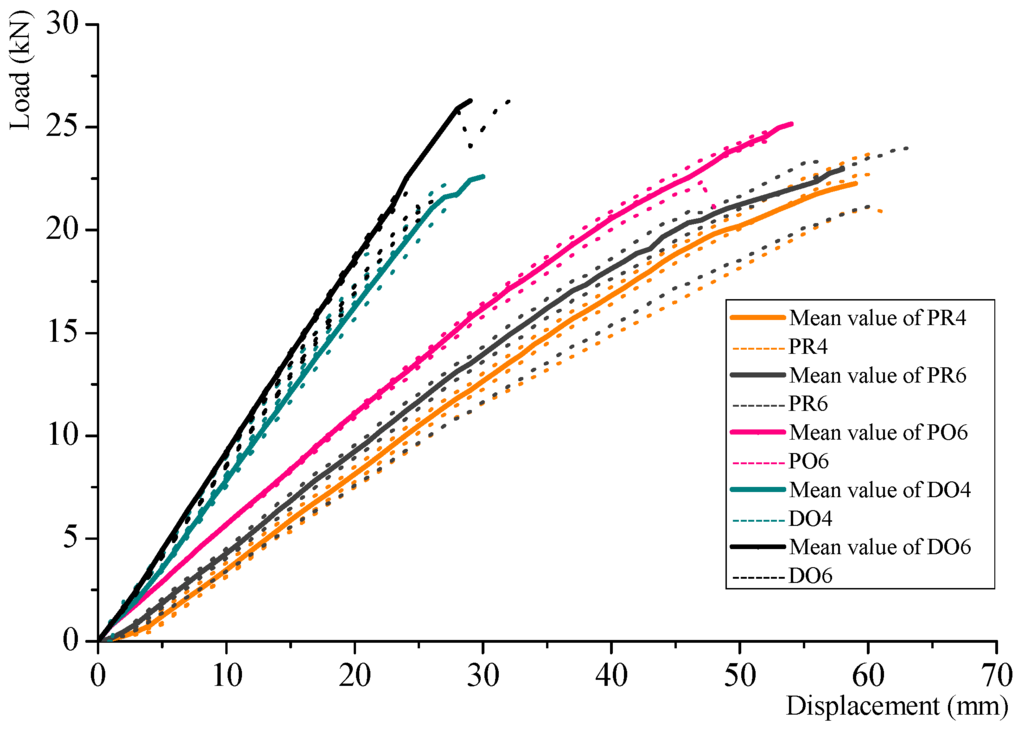 Figure 6 shows the relationship between the MOE and MOR. The mean values of each series are summarized in Table 3. Based on these results, the following conclusions are proposed.

The bending strength, the shear strength and the deflection of the glulam specimens were checked.
The load of a room was assumed to be carried by sample PO6. Based on the characteristic load combination in GB 50009-2012 [28], the design value of the load was 4000 N. According to the four-point load static bending test method, the design value of the maximum moment M and maximum shear strength V were 1.68 × 106 N·mm and 2000 N based on the principle of the balance of force and moment, respectively. The shear diagram and bending moment diagram are shown as Figure 7. 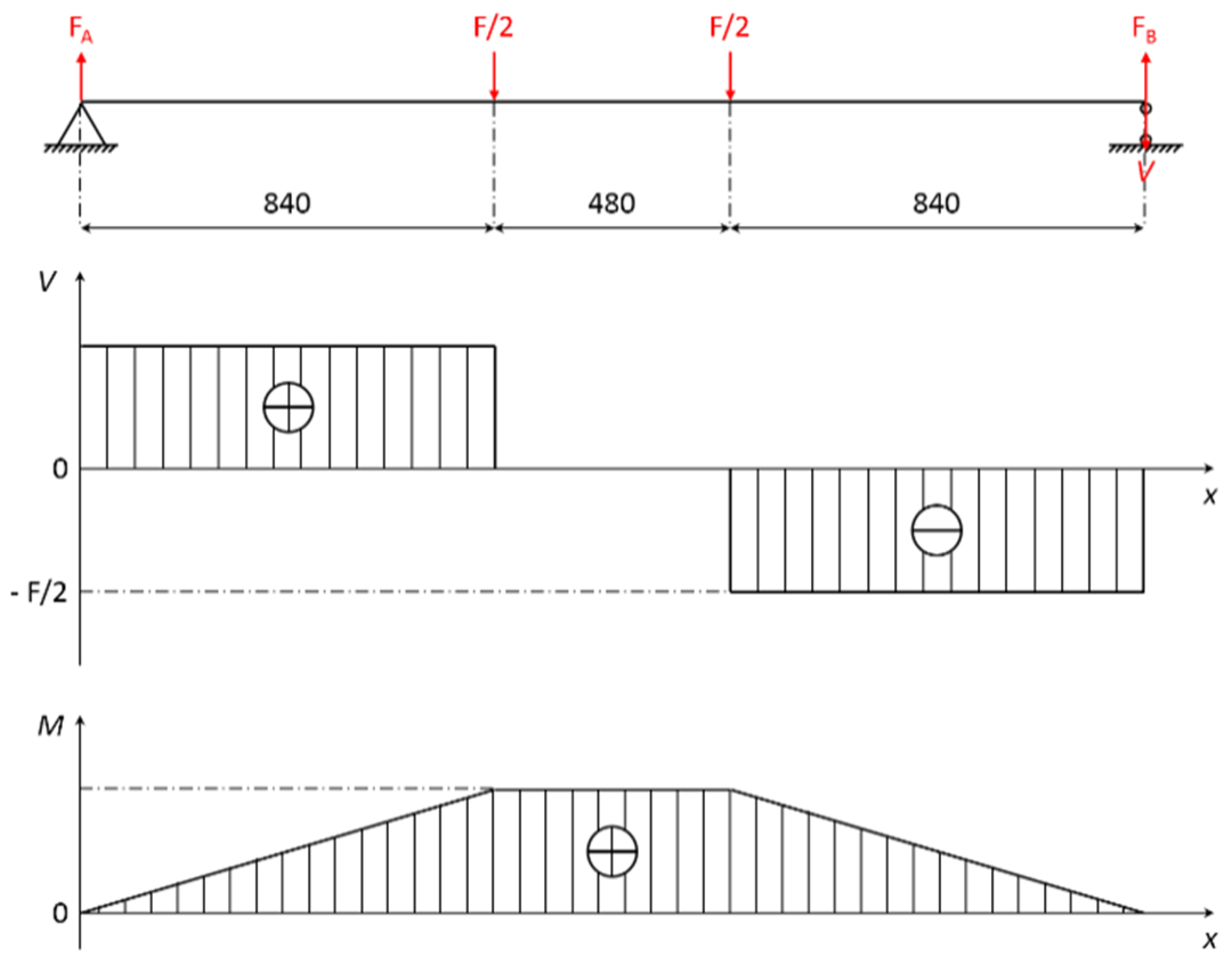 The characteristic values (i.e., 5%, the percentile of the sample) of the mechanical strength of the Cathay Poplar were calculated. Based on GB 50005-2003 [29], a national standard code for the design of timber structures issued by the Ministry of Housing and Urban-Rural Development of the People’s Republic of China, the Cathay poplar achieved a strength grade of TB (Tally of Broadleaf tree) 17. As shown in Figure 4.2.1-3 of GB 50005-2003, the wood species that achieved a strength grade of TB17 all have a design bending strength of 17 MPa and a design shear strength parallel to the grain of 2.4 MPa. Accordingly, the design values of the bending strength fm and the shear strength parallel to the grain fv were 17 and 2.4 MPa, respectively.

3.3.1. Checking Calculation of the Bending Strength

3.3.3. Checking Calculation of the Deflection

4.1. MOE of the Cathay Poplar Glulam

Table 4. MOE of the Cathay poplar glulam from the experimental tests and calculations.

4.2. MOR of the Cathay Poplar Glulam 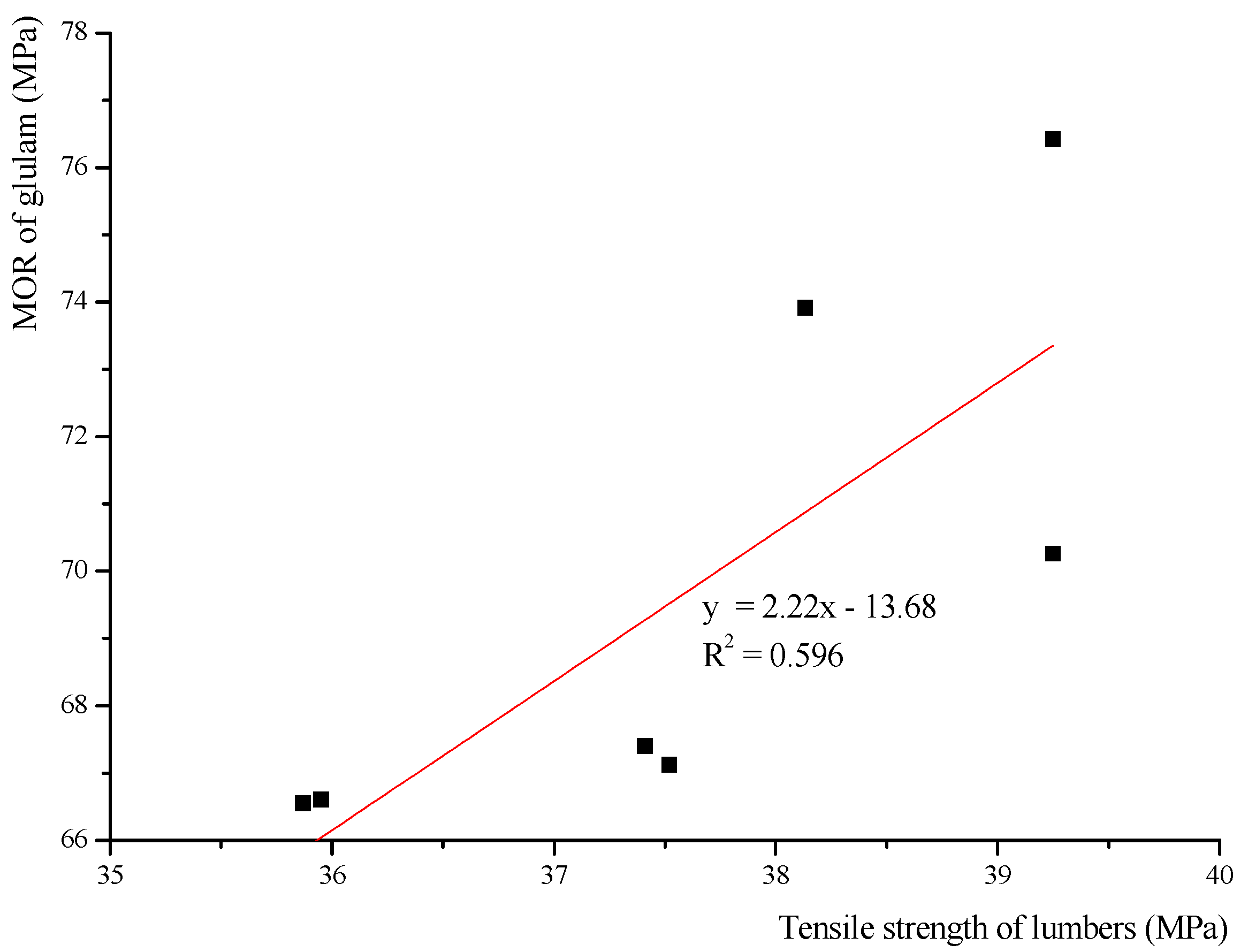 4.2.3. Equation Based on the Parallel Axis Theorem

4.2.4. Comparison between Test and Theoretical Results

The MOE and MOR of Cathay poplar glulam are calculated using the finite element program ANSYS, Version 14.5. Figure 9 shows the meshed finite element model with the loads and constraints. The “8 nodes solid 185” element was chosen, and the material properties were defined based on the experimental results of Cathay poplar glulam. Cathay poplar is orthotropic, and the glue layers (the MOE is 3000 MPa, and Poisson’s ratio μ is 0.37) are isotropic. Knots were not taken into consideration when the model was established. The compressive zone is assumed to be ideally elastoplastic, and the tensile zone is assumed to be ideally elastic. The calculation does not stop until the tensile stress in the center of an element lies in between a range ±0.5% of the tensile strength of the board section [10]. 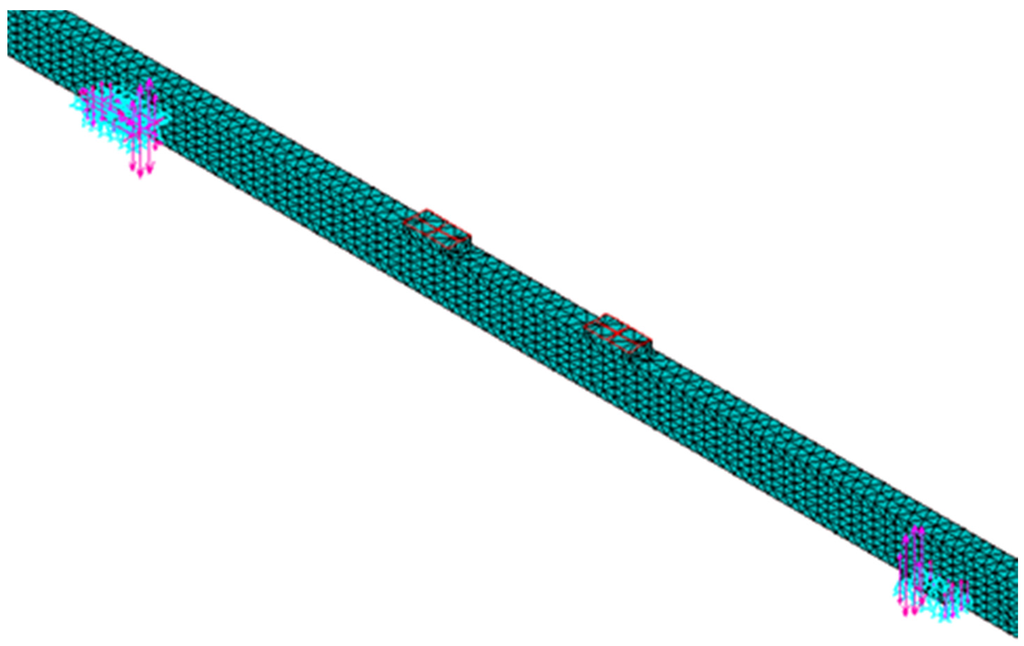 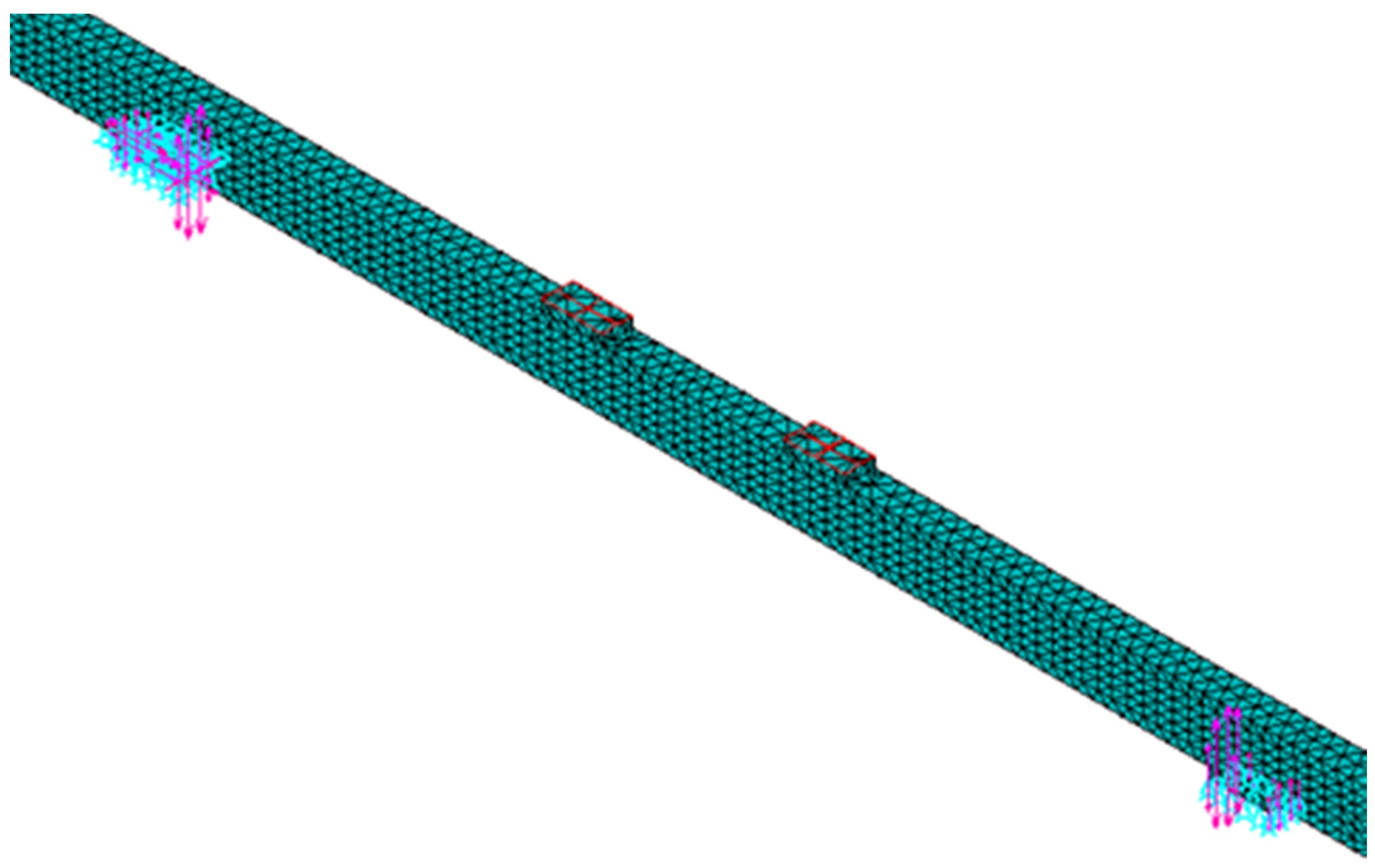 In addition, four elastic cushion blocks are set at two of the supports and two loading points to mitigate stress concentrations and to create a more accurate simulation. Based on He [37] and Tuohuti [38], the elastic cushion blocks are isotropic. The MOE is 1000 MPa, and Poisson’s ratio μ is 0.2.
The mean values of the simulation results of the MOE for bending and MOR of Cathay poplar glulam are shown in Table 6.