Photo-Electrochemical Treatment of Reactive Dyes in Wastewater and Reuse of the Effluent: Method Optimization

C.I. Natural Red 4 dye, also known as carmine or cochineal, was adsorbed onto the surface of spongin-based fibrous skeleton of Hippospongia communis marine demosponge for the first time. The influence of the initial concentration of dye, the contact time, and the pH of the solution on the adsorption process was investigated. The results presented here confirm the effectiveness of the proposed method for developing a novel dye/biopolymer hybrid material. The kinetics of the adsorption of carmine onto a marine sponge were also determined. The experimental data correspond directly to a pseudo-second-order model for adsorption kinetics (r2 = 0.979–0.999). The hybrid product was subjected to various types of analysis (FT-IR, Raman, 13C CP/MAS NMR, XPS) to investigate the nature of the interactions between the spongin (adsorbent) and the dye (the adsorbate). The dominant interactions between the dye and spongin were found to be hydrogen bonds and electrostatic effects. Combining the dye with a spongin support resulted with a novel hybrid material that is potentially attractive for bioactive applications and drug delivery systems. View Full-Text
Keywords: C.I. Natural Red 4; carmine; dye adsorption; kinetic model; marine sponge; spongin; Hippospongia communis C.I. Natural Red 4; carmine; dye adsorption; kinetic model; marine sponge; spongin; Hippospongia communis
►▼ Show Figures 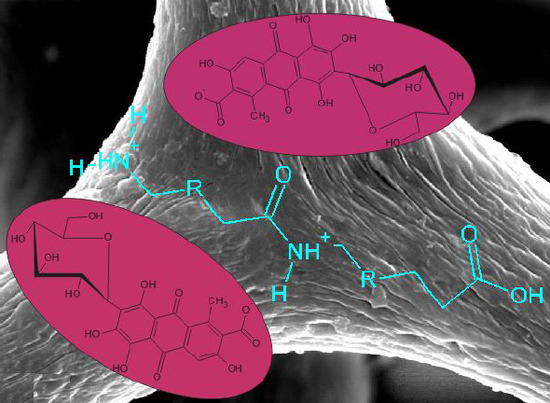