Hybrid Materials Based on the Embedding of Organically Modified Transition Metal Oxoclusters or Polyoxometalates into Polymers for Functional Applications: A Review
Next Article in Special Issue

Carbon Nanofibers and Their Composites: A Review of Synthesizing, Properties and Applications
Previous Article in Special Issue

Microbial infections cause serious risk to human life with chronic obstructive pulmonary disease, which is the fourth leading cause of death in the United States [1]. Nanoparticles such as silver/copper [2] and carbon nanotube (CNT) [3] play a vital role in the control of microbial growth. Among all the nanoparticles, CNT has unique features such as optical, electronic, magnetic, chemical and mechanical properties, which enable us to use CNT in various applications including wound dressing, tissue engineering, biosensing and drug delivery. Low metal content CNT has been proven to exhibit strong antimicrobial activity [3]. Chemical functionalization of CNT brings new properties, increases the antimicrobial activity and decreases the toxicity when checked on mammalian cells. CNT/poly(l-lysine)/poly(l-glutamic acid) thin film exhibits significant antimicrobial activity (up to 90%) towards E. coli and Staphyloccoccus epidermidis [4,5]. Covalent attachment of epilson-polylysine with CNT exhibited enhanced antimicrobial activities against E. coli, Pseudomonas aeruginosa and S. aureus. Silver-CNT composite showed strong antibacterial activity against E. coli in the dark [6]. Since the dispersion of CNT is problematic, the usage of CNT in the microbial treatment is limited. In addition, the direct contact of CNT aggregates leads to cell damage, consequently causing cell death [7]. Chemical purification or functionalization of CNT can alter the physiochemical properties which makes it dispersive or easy to dissolve in various solvents [8].

A small amount of CNT in the polymer matrix makes great alterations in mechanical, electrical and thermal properties. However, the problem of the practical application of CNT is dispersion in water, organic solvents and polymer matrix. Generally, the dispersion of CNT can be improved by some of the pretreatment methods such as functionalization with strong acid (nitric acid and sulfuric acid mixture). We have used three different concentrations of CNT viz., 25, 50 and 100 mg. In our case, it was observed that the dispersion of CNT in chitosan hydrogel was uniform. This might be due to pi bond interaction of CNT with chitosan amino and hydroxyl groups. It was observed that by increasing the CNT concentration in the chitosan hydrogel, the black color intensifies. Under acidic condition (pH < 6), chitosan is soluble in water and acts as a kind of polyelectrolyte. This property makes chitosan a potential dispersing agent for CNT. Chitosan salt treated CNT were dispersed in different organic solvents such as hexane, isopropanol, toluene, dichloromethane, chloroform, tetrahydrofuran, ethanol, ethyl acetate and dimethyl sulfoxide [22].

Chitosan is commonly soluble in acetic acid; the swelling behavior of prepared hydrogels was checked with PBS solution (Figure 1). From the data, the hydrogels swelled immediately because of the hydrophilic character of chitosan. The highest degree of swelling behavior was observed in raw chitosan and no difference has been observed between the CNT composite scaffolds. In addition, water uptake ability of CNT composite shows lower ability when compared to chitosan scaffold; this may be due to the hydrophobic nature of CNT. Further, there is no difference observed in water retention ability among the scaffolds.

FT-IR spectra of chitosan and their composites are shown in the Figure 2. The FT-IR spectrum of chitosan showed the important peaks at 1151, 1083, 1034 and 890 cm−1, which are the characteristic peaks of the polysaccharide backbone. Broad peaks around 3000 to 3600 cm−1 can be assigned to OH stretching frequency of chitosan. The peaks around 1640 and 1567 cm−1 correspond to amide I and amide II, respectively [14]. A slight variation in stretching frequency was observed in the composite hydrogel. This might be because the pi-bonds of the carbon nanotube may be chemically interacting with the amide and OH groups of chitosan. However, most of the peaks belong to chitosan moieties.

In the present study, chitosan acts as a media to disperse the CNT solution, which can then act as antimicrobial agents. The OH stretching frequency of CNT-Chitosan composite hydrogels decreased from 3449 to 3434, 3432 and 3421 cm−1. This might be due to some kind of ionic bond formation, which may be possible between the pi bonds of the carbon nanotube with chitosan.

Field emission scanning electron microscopy images of chitosan and pristine CNT are shown in Figure 3. Chitosan morphology was smooth and dense. The diameters of the carbon nanotubes are measured in nanometers.

For further confirmation, optical microscopy was performed to check the dispersion of CNT particles. A normal photograph of hydrogels is shown in Figure 4a. It was observed from the figures that chitosan hydrogel appeared to be white in color. On the other hand, CNT composites were black in color, and the color intensified even further with the increasing concentration of CNT.

Figure 4b clearly indicates that with an increase in the CNT concentration, deepened black color was observed, which further indicates that the CNT was uniformly dispersed in the chitosan matrix. Surface morphology, porosity, dispersion and microstructure of the hydrogels were examined by scanning electron microscopy, as presented in Figure 4c.

The distribution of the porosity was consistent with being condensed by increasing concentrations of CNT. From the results, it can be inferred that the fabricated hydrogel material is suitable for various biomedical and food science applications.

Figure 5 shows the antimicrobial activity of chitosan and its hydrogels. Compared with chitosan, all the CNT hydrogels showed higher antimicrobial activity. Numerous mechanisms have already been published pertaining to the antimicrobial activity of chitosan. One of the most accepted mechanisms is that the positive charge of chitosan probably interacts with negatively charged microbial cell membranes. The interaction occurs between protonated ammonium group of chitosan and the microbial cell surface, provoking the osmotic imbalance and at the same time CNT shows a synergistic effect that damages the membrane in situ to control the overall growth of the microbe. In another theory, it brings about the hydrolysis of intracellular peptidoglycans in the microbes [14]. The experiment shows that CNT incorporated hydrogel showed greater antimicrobial activity with respect to increasing concentration towards S. aureus when compared to E. coli and C. tropicalis. The three different concentrations of CNT composite hydrogels did not show considerable activity towards E. coli.

The presence of an outer membrane in E. coli might have caused obstruction in binding of CNT to initiate antimicrobial activity, which might be because of the strong net negative charge on the E. coli surface. The mechanism of effective antimicrobial activity towards S. aureus is through direct binding of bacterial surface proteins with the CNTs. The nanotubes get released from the hydrogel and target the bacteria, probably within 24 h, which further causes the microbial cell membrane lysis and subsequent loss of membrane potential [23,24]. Gram positive bacterium S. aureus was inhibited by higher molecular weight of chitosan. The main reason for this might be that the higher molecular weight of chitosan inhibits the nutrient adsorption. On the other hand, gram negative bacteria was not inhibited by higher molecular weight chitosan. This might be due to the fact that higher molecular weight chitosan cannot disturb the metabolism of the cell. The results are coherent with the previous literature [25].

Chitosan with a degree of deacetylation of 90% and a molecular weight of 310 KDa was purchased from Kitto chemicals, Seoul, Korea. Multiwalled carbon nanotube (MWNT) outer diameter <8nm, length (10–30μm) were purchased from cheaptubes.com, Grafton, VT, USA. All the other chemicals and reagents were of analytical grade.

For Chi-CNT hydrogel (CNT25), 25 mg of pristine multi walled carbon nanotubes were dissolved in 40 mL of distilled water. The CNT solution was dropped in chitosan gels drop wise to mix equally. The mixture was stirred at 850 rpm for 24 h at room temperature. After 24 h, hydrogel was kept to freeze at −24°C and dried. For CNT50 and CNT100; 50 and 100 mg of CNT were used, respectively.

The porosity of hydrogels was measured by liquid displacement method as reported earlier [21] and water uptake and retention ability of the composite hydrogels were measured as per the previous report [26].

The stretching frequencies of hydrogels were examined by Fourier transform infrared spectroscopy (FT-IR) (Perkin Elmer Inc., Waltham, MA, USA) and spectrum GX spectrometry within the range of 400 to 4000 cm−1. Morphology and pore size of chitosan and Chitosan-CNT hydrogels were obtained by optical microscopy (CTR 6000; Leica, Wetzlar, Germany) and scanning electron microscopy (SEM JSM-6490LV, JEOL, Peabody, MA, USA). The surface of hydrogels was sputtered with gold and photographed in the case of SEM analysis.

Serial dilution method was performed to evaluate the antimicrobial activity towards S. aureus, E. coli and C. tropicalis. Microbial colony was inoculated overnight. The OD was compared to Mc Farland standard and equal volume of counted colonies was incubated for 24 h with carbon nanotubes (CNT) incorporated chitosan hydrogel of different concentrations 25, 50 and 100 mg and chitosan control. The samples were kept in a shaking incubator followed by serial dilution of each sample. The diluted samples were plated and the colonies formed were counted.

The developed Chitosan-CNT hydrogel exhibited well-defined pore structure with water uptake and retention ability. In addition, Chitosan-CNT hydrogel showed a strong antimicrobial activity against S. aureus, E. coli and C. tropicalis. Hence, we suggest that the CNT dispersed in a chitosan matrix will be a promising material for biomedical as well as food science applications.

This research was supported by a grant from the Marine Bioprocess Research Center of the Marine Biotechnology Program, funded by the Ministry of Oceans and Fisheries, Republic of Korea.

Jayachandran Venkatesan and Rangasamy Jayakumar have desinged and performed the experiments. Annapoorna Mohandas conducted antimicrobial study. Jayachandran Venaktesan and Ira Bhatnagar constructively discussed and wrote the manuscript. Se-Kwon Kim proof read the results and implications and commented on the manuscript at all stages. 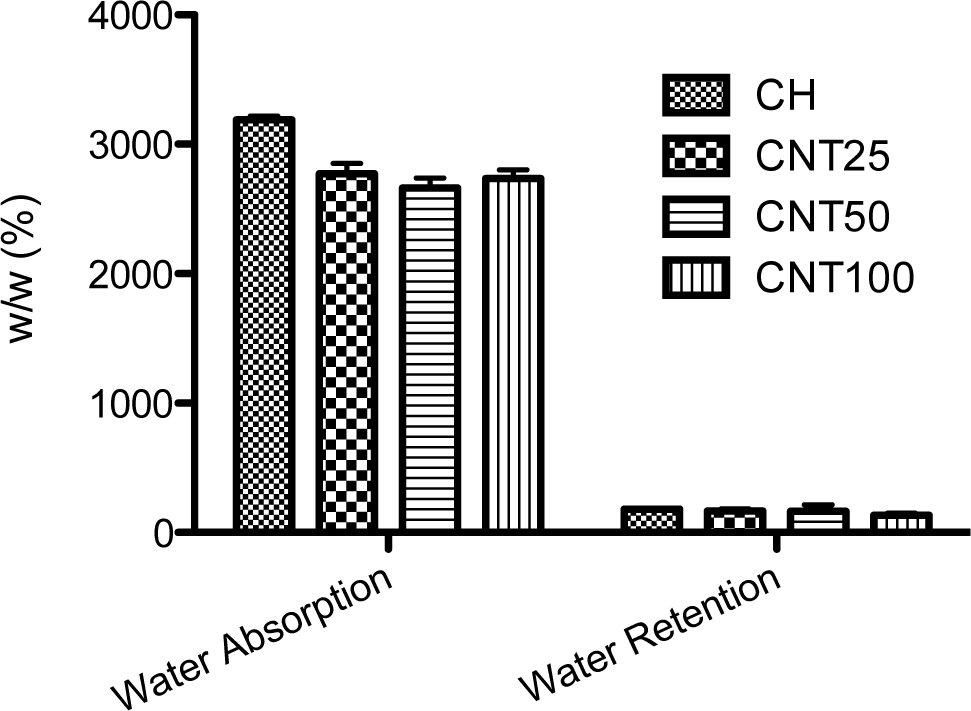 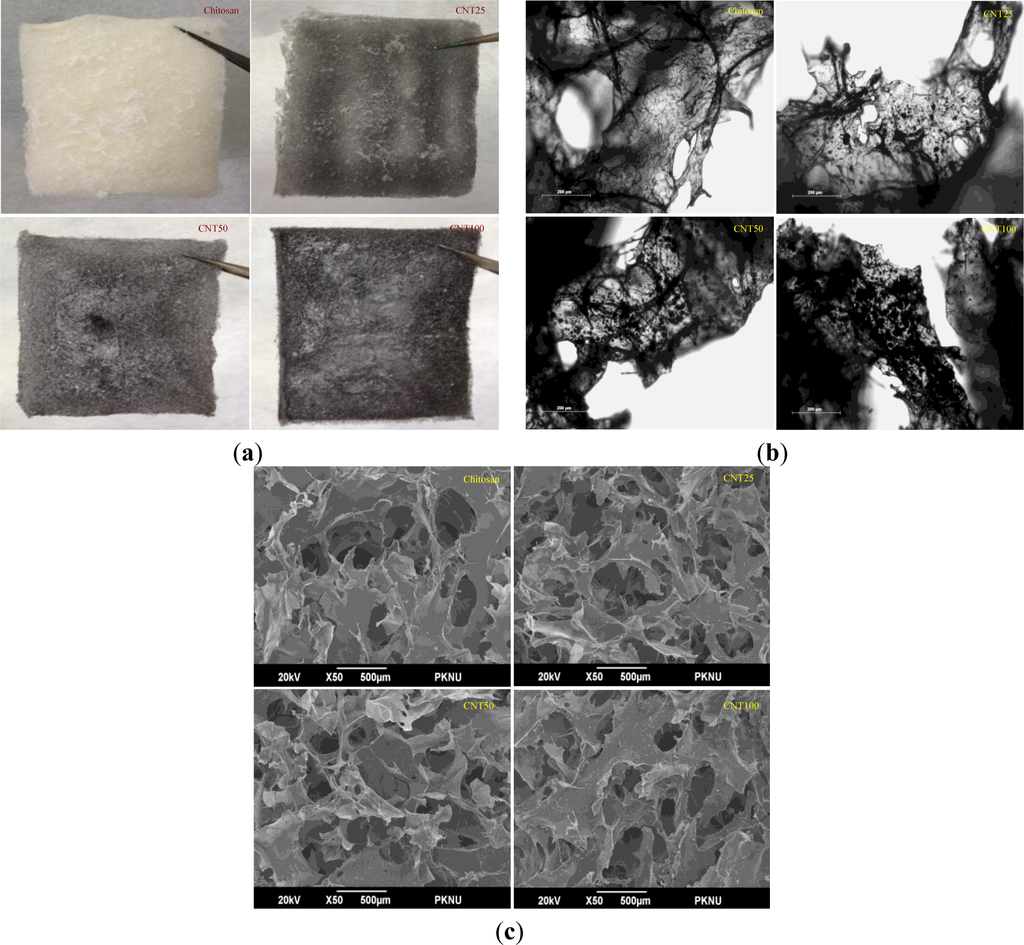