A Metal-Organic Framework (MOF), iron-benzenetricarboxylate (Fe(BTC)), has been studied for the adsorptive removal of azo-dye Orange II from aqueous solutions, where the effect of various parameters was tested and isotherm and kinetic models were suggested. The adsorption capacities of Fe(BTC) were much higher than those of an activated carbon. The experimental data can be best described by the Langmuir isotherm model (R2 > 0.997) and revealed the ability of Fe(BTC) to adsorb 435 mg of Orange II per gram of adsorbent at the optimal conditions. The kinetics of Orange II adsorption followed a pseudo-second-order kinetic model, indicating the coexistence of physisorption and chemisorption, with intra-particle diffusion being the rate controlling step. The thermodynamic study revealed that the adsorption of Orange II was feasible, spontaneous and exothermic process (−25.53 kJ·mol−1). The high recovery of the dye showed that Fe(BTC) can be employed as an effective and reusable adsorbent for the removal of Orange II from aqueous solutions and showed the economic interest of this adsorbent material for environmental purposes. View Full-Text
Keywords: iron-benzenetricarboxylate; Orange II; azo-dye; adsorption process; Fe(BTC) iron-benzenetricarboxylate; Orange II; azo-dye; adsorption process; Fe(BTC)
►▼ Show Figures 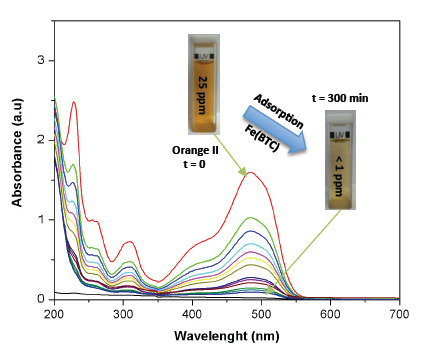