The electronic properties of zincblende ZnSe/Si core-shell nanowires (NWs) with a diameter of 1.1–2.8 nm are calculated by means of the first principle calculation. Band gaps of both ZnSe-core/Si-shell and Si-core/ZnSe-shell NWs are much smaller than those of pure ZnSe or Si NWs. Band alignment analysis reveals that the small band gaps of ZnSe/Si core-shell NWs are caused by the interface state. Fixing the ZnSe core size and enlarging the Si shell would turn the NWs from intrinsic to p-type, then to metallic. However, Fixing the Si core and enlarging the ZnSe shell would not change the band gap significantly. The partial charge distribution diagram shows that the conduction band maximum (CBM) is confined in Si, while the valence band maximum (VBM) is mainly distributed around the interface. Our findings also show that the band gap and conductivity type of ZnSe/Si core-shell NWs can be tuned by the concentration and diameter of the core-shell material, respectively. View Full-Text
Keywords: ZnSe/Si core-shell; nanowires; interface states; tunable bandgap; conductivity type ZnSe/Si core-shell; nanowires; interface states; tunable bandgap; conductivity type
►▼ Show Figures 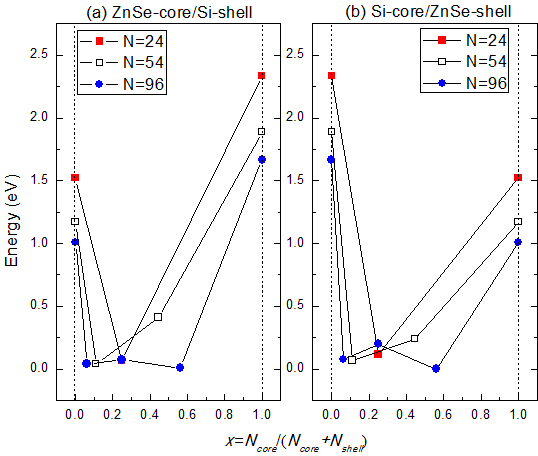