The anodic electrodeposition of manganese oxide in an electrolyte containing Mn2+ ions can be described by the following Equation [9]:

In Equation (1), the oxidation state of Mn increases from +2 to +4. Since it is improbable that two electrons are transferred in a single step, the formation of MnO2 from Mn2+ occurs concomitantly with the oxidation of water molecules. The detailed intermediate steps for the overall reaction of Equation (2) are as follows:

Nickel hydroxide is subsequently involved in the electrochemical reactions of Equations (8) and (9) [21,22]:

Finally, the eletrodeposition of nickel oxide in an electrolyte containing Ni2+ ions can be represented by the Equation (10):

The SEM (Hitachi, Tokyo, Japan) image of the electrodeposited Mn-Ni oxide film is shown in Figure 1. The substrate was well covered with nanofibers. Porous spaces were observed between the nanofibers, enhancing the redox process. This type of morphology is favorable for electrochemical capacitor applications owing to its large surface area.

Figure 2 represents the pore size distribution of the electrodeposited Mn-Ni oxide film. The size of the pores in the film was mainly distributed in the range of 2–20 nm.

The surface composition of the electrodeposited Mn-Ni oxide film was analyzed by XPS (Thermo Fisher Scientific, East Grinstead, UK). Figure 4 shows the XPS spectrum of the Mn-Ni oxide film electrodeposited from an electrolyte containing 0.1 M of manganese acetate and 0.2 M of nickel chloride. The survey scan (Figure 4a) shows that the film contained Mn, Ni, and O. The peak representing C due to the substrate (graphite sheet) was also observed. A higher resolution of the Mn 2P3/2 and Ni 2P3/2 spectra revealed that the peak at 642.6 eV corresponded to manganese (IV) oxide [23] while the peak at 855.2 eV represented the presence of nickel (II) oxide [24] in the film. A quantitative analysis using XPS yielded a surface composition of Mn0.24Ni0.05O0.71.

Manganese acetate (Mn(CH3COO)2 4H2O) and nickel chloride (NiCl2 6H2O) were used as the sources of manganese and nickel, respectively. The concentrations of manganese acetate and nickel chloride were 0.1 M and 0.2 M, respectively. The electrolytes were obtained by dissolving the above chemicals in deionized water. All chemicals were of analytical reagent grade supplied by Sigma-Aldrich (St. Louis, MO, USA).

The electrodeposition was carried out using a standard three-electrode cell. A saturated Ag/AgCl electrode was used as a reference electrode and a graphite sheet having a size of 20 × 70 mm2 (exposed area of 20 × 35 mm2) prepared by the same aforementioned method was used as a counter electrode. During electrodeposition, a constant potential of 1.2 V versus the reference electrode of Ag/AgCl from a stagnant electrolyte at room temperature (24 ± 1 °C) was applied using a computer-controlled potentiostat (Princeton Applied Research, VSP). The electrodeposition was done for 60 s in all cases. After deposition, the samples were washed with a deionized water jet, dried with flowing nitrogen gas, and annealed in an oven at 250 ± 1 °C for 3 h. Annealing of the samples was done to improve the adhesion of the Mn-Ni oxide films to the substrate.

The weight of the electrodeposited manganese-nickel oxides films were determined by a microbalance to an accuracy of 10 μg. The surface composition of the film was identified using X-ray photoelectron spectroscopy (XPS). Microstructural analysis of the film was carried out using a high-power X-ray diffractometer (XRD, Rigaku, D/max- 2500V/PC), which used a Cu Kα radiation (wavelength = 0.154 nm) as an incident beam and worked at 40 kV and 150 mA. Surface morphology of the film was examined using a field emission scanning electron microscopy (FE-SEM, Hitachi, S-4800, Tokyo, Japan). Nitrogen adsorption-desorption measurements were made using an adsorption analyzer (Micrometrics, ASAP 2010, Norcross, GA, USA) to obtain the pore size of the electrodeposited Mn-Ni oxide film. The sample was outgassed for 6 h at 473 K prior to the measurements. The pore sizes were calculated based on the Barret-Joyner-Halenda (BJH) desorption method.

For electrochemical measurements, a platinum-coated titanium mesh (2.5 cm2 in size) and a saturated Ag/AgCl electrode were used as a counter electrode and a reference electrode, respectively. Cyclic voltammograms (CVs) were recorded between −0.2 and 1.0 V versus Ag/AgCl. The capacitance (C) of an electrode can be calculated from the following Equation 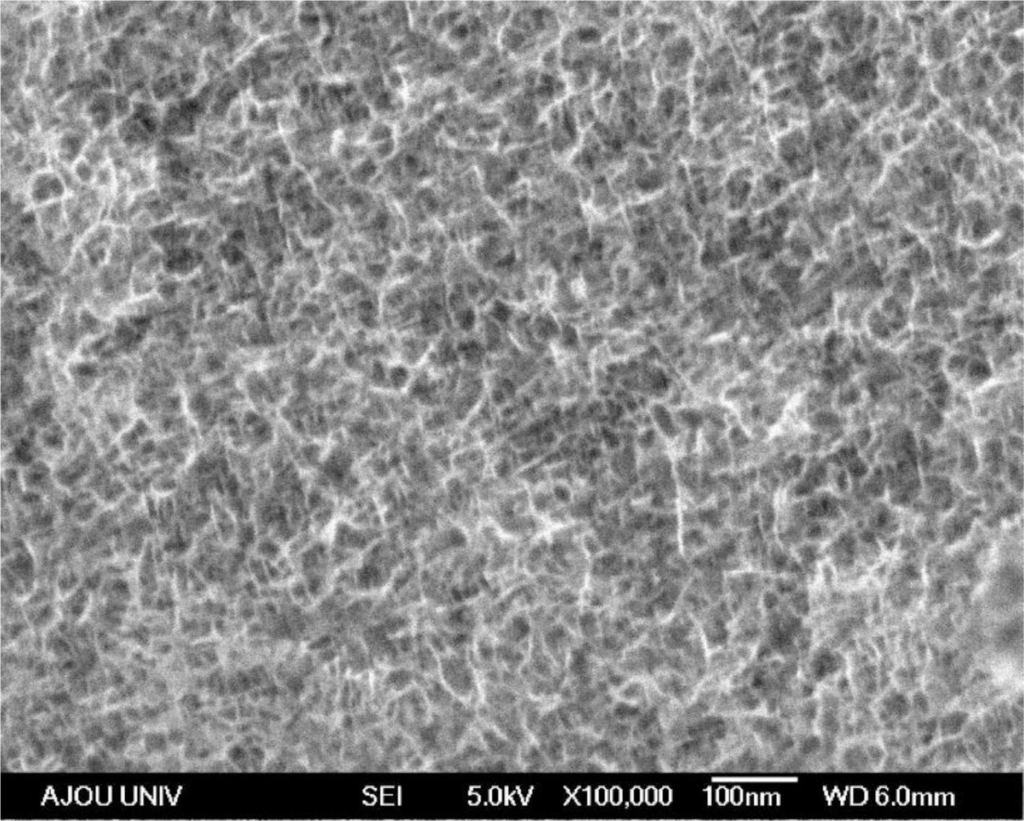 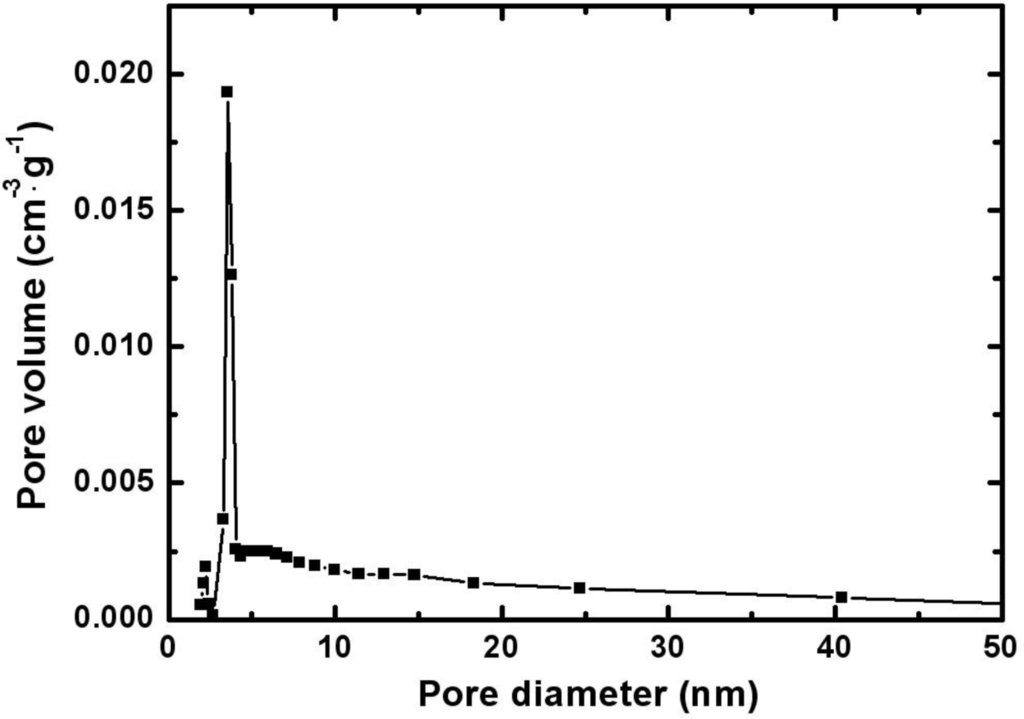 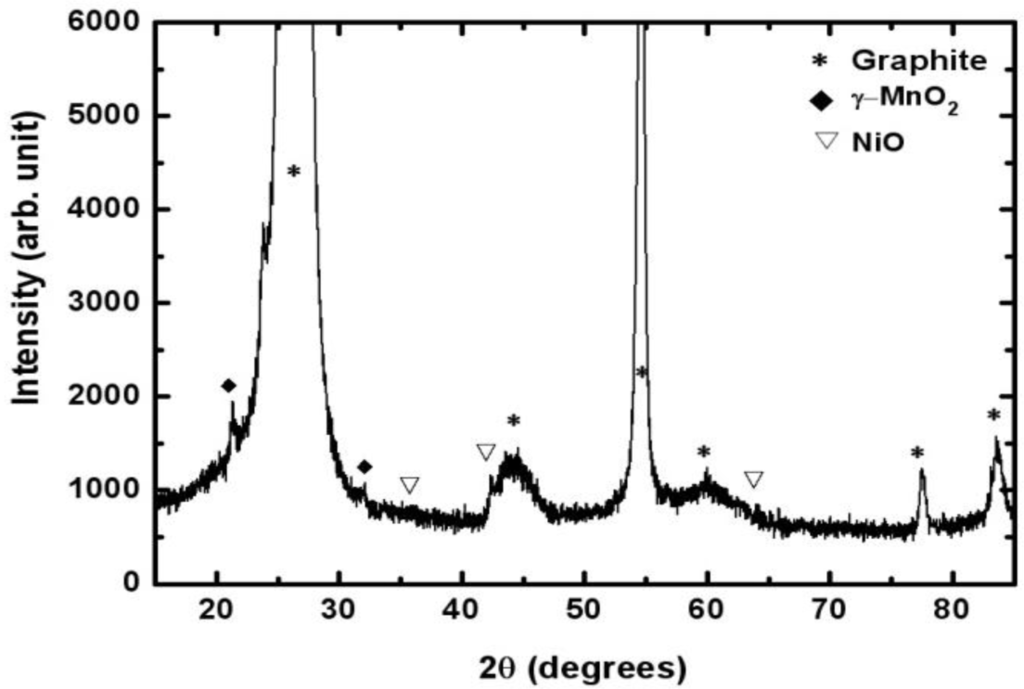 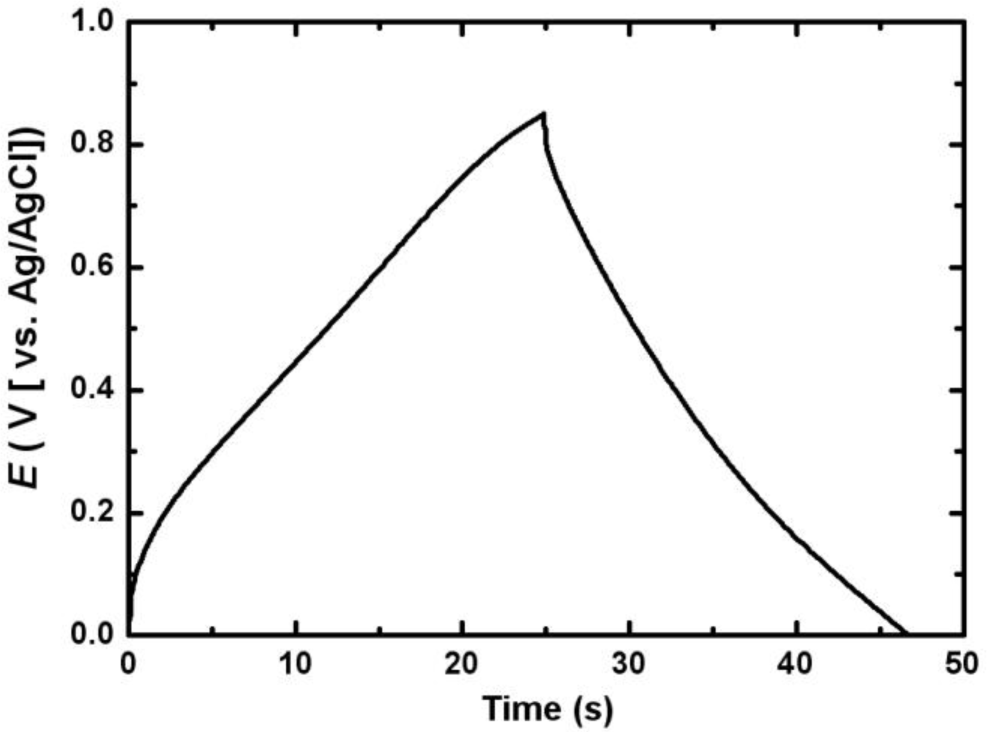