Poly(acrylic acid-co-allyl acrylate) statistical copolymers were synthesized in a controlled manner in two steps: first tert.butyl acrylate and allyl acrylate were polymerized via atom transfer radical polymerization (ATRP) and afterwords the tert.butyl protective groups were removed via hydrolysis. Samples of self cleaning glass (SCG) were coated with thin films of poly(acrylic acid-co-allyl acrylate) and cross-linked afterwards by UV irradiation (in the presence of a photoinitiator and an accelerator). Solution cast thin films were transparent and homogeneous before and after UV cross-linking. The irradiated samples were found to be hydrophilic (Θ < 20°) and water insoluble. The coating prevented the spontaneous hydrophobization of the SCG by residual silicon exhaled from the sealing material. The TiO2 photocatalyst that covers the glass surface was found to strip the protective coating. The rate of the photooxidation process was measured by IR spectroscopy. The real field performance of the protective coating was also tested. View Full-Text
Keywords: thin films; self-cleaning glass; ATRP; cross-linking reaction; hydrogels thin films; self-cleaning glass; ATRP; cross-linking reaction; hydrogels
►▼ Show Figures 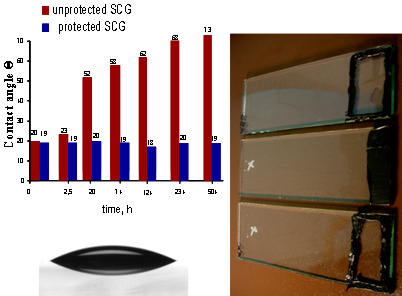