In recent years bio-based polymer composites have been the subject of many scientific and research projects, as well as many commercial programs. Growing global environmental and social concern, the high rate of depletion of petroleum resources and new environmental regulations have forced the search for new composites and green materials, compatible with the environment. The aim of this article is to present a brief review of the most suitable and commonly used biodegradable polymer matrices and NF reinforcements in eco-composites and nanocomposites, with special focus on PLA based materials.
Keywords: biopolymer; poly(lactic acid); natural fibers; nanocomposites biopolymer; poly(lactic acid); natural fibers; nanocomposites

In the last decades biopolymers prepared from renewable resources have attracted great attention in both the academic and industrial worlds. In fact, renewable sources of polymeric materials reinforced with lignocellulosic fibers derived from annually renewable resources, offer an answer to maintaining sustainable development of economically and ecologically attractive materials with respect to ultimate disposability and raw materials use. In recent years, scientists and engineers have been working together to use the inherent strength and performance of the fibers and nanoparticles in combination with natural green polymers to produce a new class of bio-based composites. The special challenges for this type of bio-composites are their eco attributes, that make them environmentally friendly, completely degradable and sustainable.
Poly(lactic acid) (PLA) is a class of crystalline biodegradable thermoplastic polymer with relatively high melting point and excellent mechanical properties. Recently PLA has been highlighted because of its availability from renewable resources such as corn and sugar beets. PLA is synthesized by the condensation polymerization of d- or l-lactic acid or ring-opening polymerization of the corresponding lactide [1,2].
Under specific environmental conditions, pure PLA can degrade to carbon dioxide, water and methane over a period of several months to two years, a distinct advantage compared to other petroleum plastics that need much longer periods. Advanced industrial polymerization technologies have been developed to obtain high molecular weight pure PLA, which leads to a potential for structural materials with enough lifetime to maintain mechanical properties without rapid hydrolysis.
The final properties of PLA strictly depend on its molecular weight and crystallinity. PLA has been extensively studied as a biomaterial in medicine, but only recently it has been used as a polymer matrix in composites. In fact, PLA resins are nowadays marketed for different applications. In 2002, Cargill-Dow LLC started up a commercial PLA plant, with the aim of produce PLA fibers for textiles and nonwovens, as well as PLA films for packaging applications and rigid containers.
The aim of this review is to examine the state of the art regarding PLA-based materials and in particular, eco-composites realized with natural fibres, agricultural wastes, micro and nanocomposites in order to define the real final possibilities for these materials to be accepted on the market. 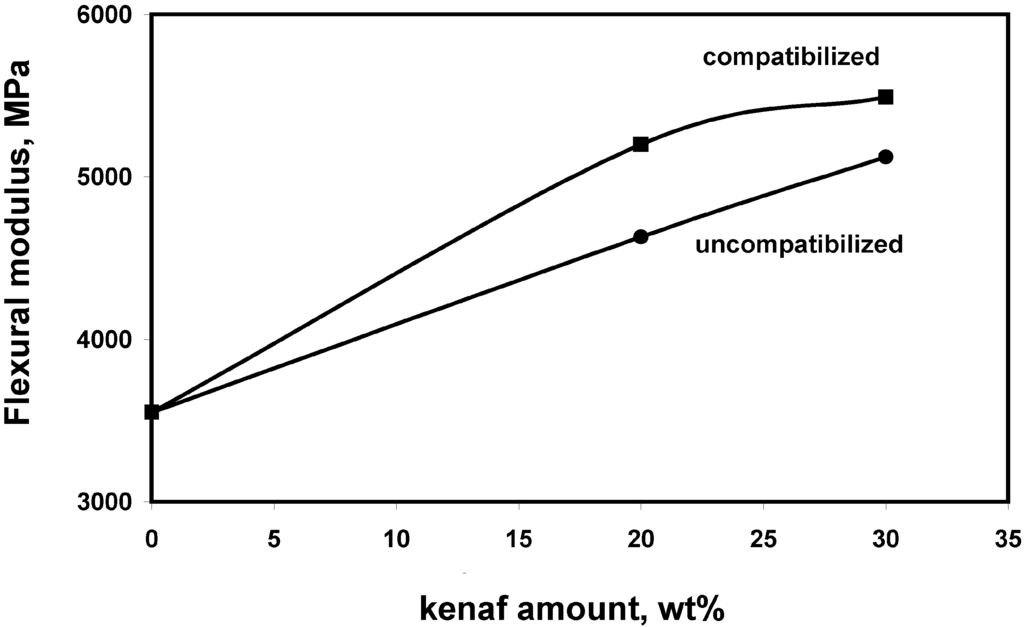 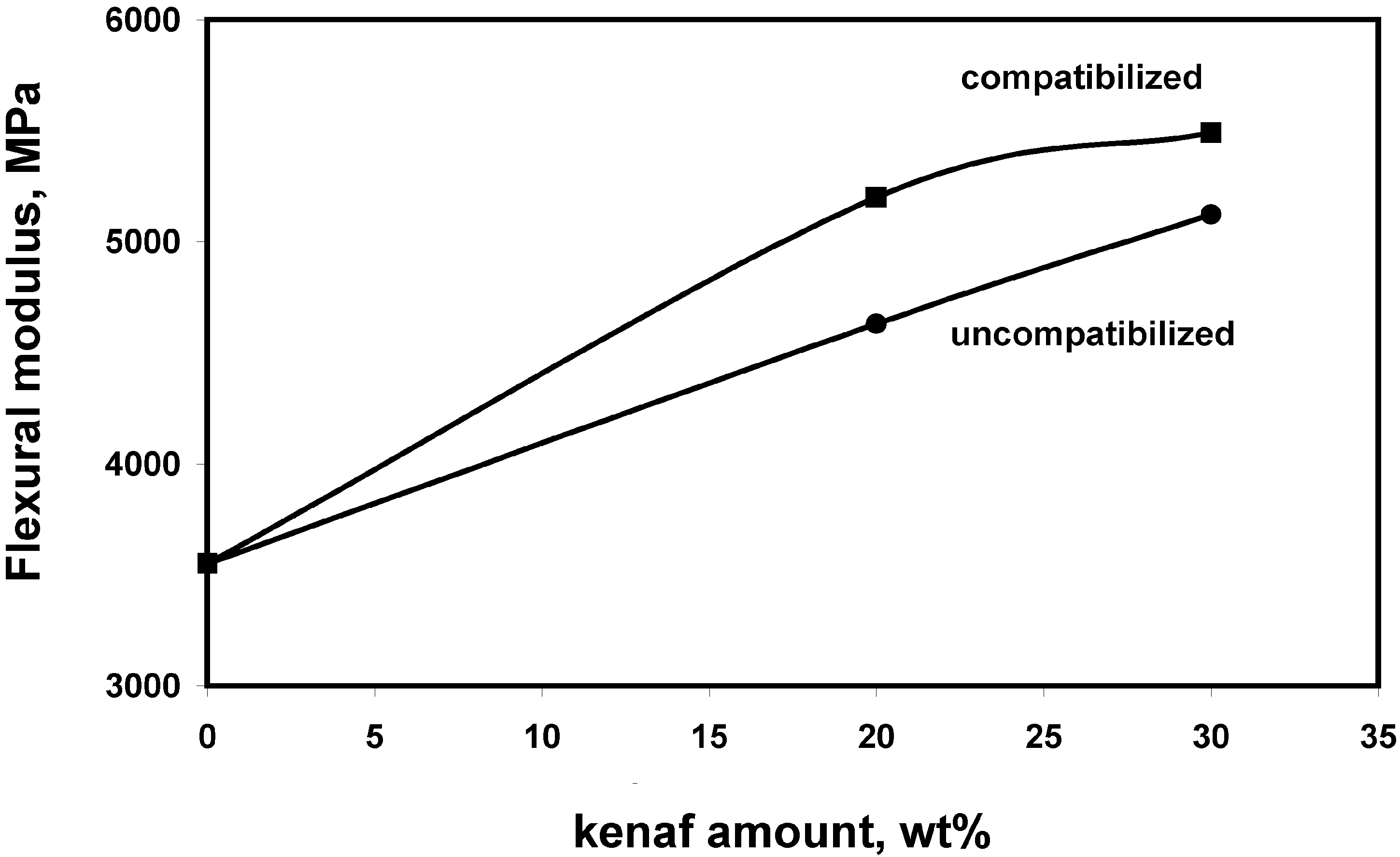 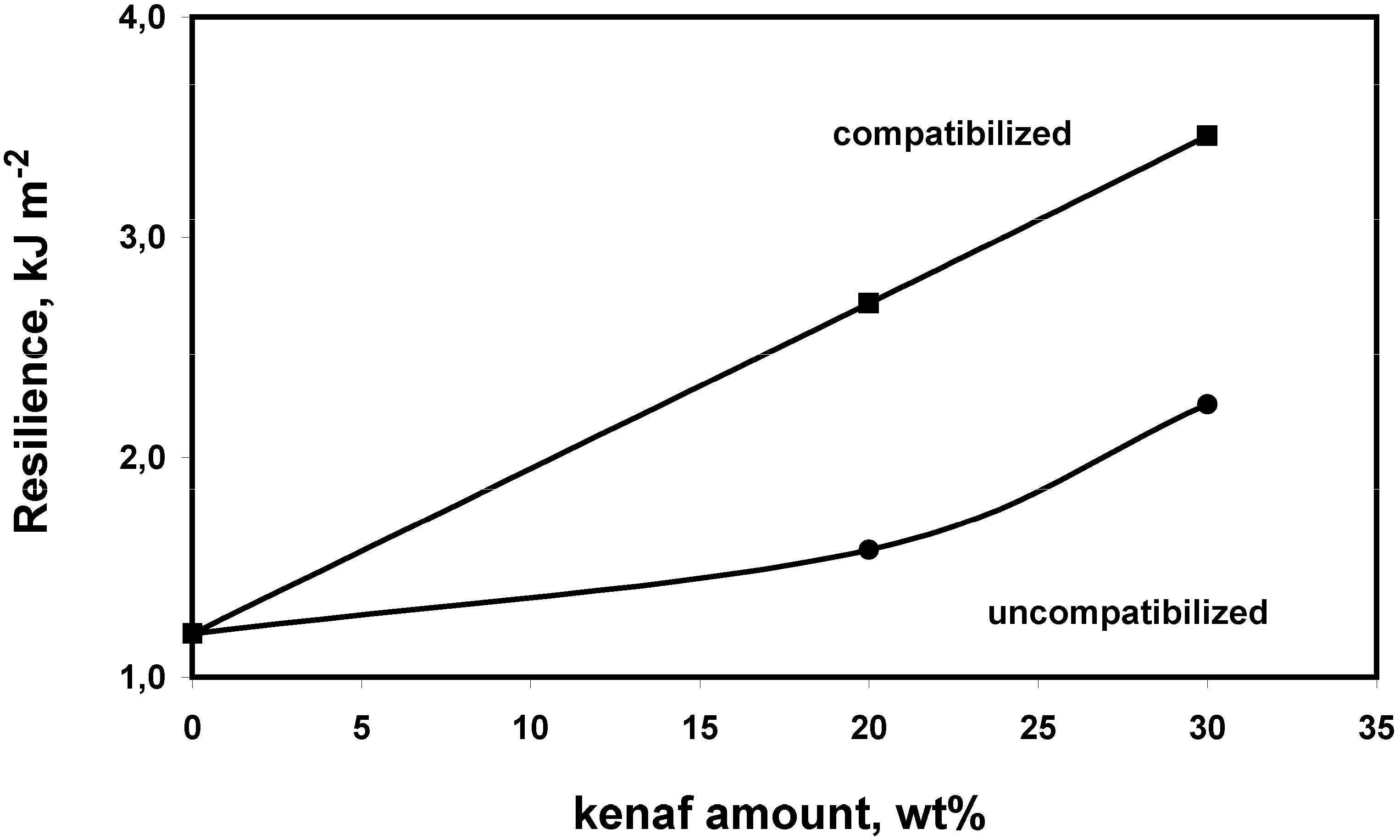 Renewable agricultural waste lignocellulosic materials and bio-based polymer matrices provide an attractive eco-friendly quality as well as the environmental sustainability to the resulting natural fiber reinforced bio-based composites. Recently, the interest in agricultural wastes as a substitute for wood-based raw materials has increased significantly.
Water bamboo husk is one of major agricultural wastes in Taiwan. The powder obtained from the water bamboo husk was added to PLA to form novel reinforced biodegradable composites [18]. Morphologies, mechanical properties, and heat resistance of these water bamboo powder reinforced composites were investigated. The results indicate that the char yields were increased as plant powder was incorporated to PLA. In addition, the mechanical properties were also enhanced due to the addition of powders. The increments of storage modulus of PLA were about 50%-200%. Moreover, the increments of loss modulus of PLA were about 70%-200%. On the other hand, the Tg of PLA was slightly decreased by the addition of powder, and this may improve the brittle characteristics of PLA. Furthermore, it was concluded that this type of reinforced PLA would be more environmental friendly than the artificial additive-reinforced one.
Other agricultural waste that could be considered as potential reinforcing filler in semi-crystalline thermoplastic bio-based polymer composites is also, the rice straw. Global paddy production reached 628 million tons in 2005 with an additional 1% increase in 2006. The rice straw fiber has the similar chemical composition as other natural fibers used in composites. Generally, whole rice straw is composed of rice husks, leaf sheathes, straw leaf blades, straw steam and knots, and straw roots. All fiber components have various chemical constituents, especially cellulose and residual ash content, that may contribute differently to the properties of the rice straw reinforced composites. The main carbohydrate components of rice straw are hemicellulose, cellulose and lignin. Due to the rice straw resistance to bacterial decomposition, as well as high content of silica (up to 20 wt%), the rice straw is suitable as a filler in building composites. In the framework of the ECO-PCCM project supported by the EU FP6-INCO program, eco-composites based on PLA, PHBV and PP reinforced with rice straw were designed and studied [8,19,20]. The properties of the obtained PLA/rice straw composites are comparable to commercially available polypropylene composites reinforced with 20 wt% of glass fibers. Moreover, processing can easily be carried out in one step below a critical fiber volume.

Various fillers with non-nanoscale particle dimensions could also be used to modify the properties of PLA. A common approach to incorporate them into the polymer matrix is the already mentioned ring-opening polymerization of lactide.
In some cases, lactic acid could be graft-polymerized onto the filler surface. A series of hydroxyapatite (HA)/PLA composites were prepared using this kind of filler particles modification. This approach provides good dispersion of filler particles in PLA matrix [42].
Large amounts of stable β-anhydrite II (AII), a specific type of dehydrated gypsum and a by-product of lactic acid production process, can be melt-blended with bio-sourced and biodegradable PLA to produce economically interesting novel composites with high tensile strength and thermal stability. Due to PLA’s sensitivity towards hydrolysis, the utilization of β-anhydrite II (All) as filler is a prerequisite. Good filler dispersion throughout the polyester matrix, make these composites interesting in biodegradable rigid packaging or technical applications [43]. Different modifiers can be also used to increase the toughness of these composites. For example the addition of impact modifiers based on ethylene copolymer leads to remarkable thermo-mechanical performances of these composites.
The toughness of these systems is also modified by addition of selected low molecular weight plasticizers [bis(2-ethylhexyl) adipate and glyceryl triacetate] and polymeric adipates with different molecular weights. The incorporation of plasticizers provides easier processing as well as better performances of the composites [44]. Similar plasticizers like acetyl tributyl citrate (ATBC) and poly(1,3-butylene adipate) (PBA) are used in preparation of PLA/carbon black (CB) high performance composites [45].
Some fillers containing specific functional groups are a good base for preparation of composite membranes. For example, a PLA/siloxane/calcium carbonate composite membrane containing mercapto-groups (PSC-SH) exhibits antibacterial ability. Mercapto-groups were reported to adsorb silver ions, which are well known to show antibacterial activity [46].
In the osteological field, the study of repairing and recovering processes for bone tissues has been one of the major clinical research subjects. A series of microsphere composites made from PLA and β-calcium phosphate (β-TCP), an osteogenesis material, were prepared and their potential applications in participation to the growth of new bone tissues on bone defects were estimated [47].

PLA-based materials are a new class of materials that in recent years has aroused an ever growing interest due to the continuously increasing environmental awareness throughout the world. They can be considered as the “green” evolution of the more traditional ecocomposites, essentially consisting of synthetic polymers based composites reinforced with natural fibres or other micro or nanofiller.
From a technological point of view, some doubt about the performance of these new materials, as well as the higher costs of biodegradable polymer matrices with respect to other polymers, still prevent their wider commercial diffusion.
With regards to the still higher commercial prices of biodegradable polymers with respect to commodities, other factors, such as the lower costs for disposal, should also be taken into account. Moreover, the price of biodegradable polymers, and in particular those derived from natural sources, is expected to further decrease in the coming years due to innovative manufacturing practices, so biodegradable composites can be considered a valid alternative to traditional composites and ecocomposites: in fact, because of their compostability, they can represent an effective solution to the waste disposal problem of polymer based materials. Their unique properties should be a solid base to develop new applications and opportunities for biocomposites in the 21st century “green” materials world.