Cardiovascular surgery requires the use of state-of-the-art artificial materials. For example, microporous polytetrafluoroethylene grafts manufactured by Gore-Tex® are used for the treatment of cyanotic heart defects (i.e., modified Blalock–Taussig shunt). Significant mortality during this palliative operation has led surgeons to adopt mathematical models to eliminate complications by performing fluid–solid interaction (FSI) simulations. To proceed with FSI modeling, it is necessary to know either the mechanical properties of the aorta and graft or the rheological properties of blood. The properties of the aorta and blood can be found in the literature, but there are no data about the mechanical properties of Gore-Tex® grafts. Experimental studies were carried out on the mechanical properties vascular grafts adopted for modified pediatric Blalock–Taussig shunts. Parameters of two models (the five-parameter Mooney–Rivlin model and the three-parameter Yeoh model) were determined by uniaxial experimental curve fitting. The obtained data were used for patient-specific FSI modeling of local blood flow in the “aorta-modified Blalock–Taussig shunt–pulmonary artery” system in three different shunt locations: central, right, and left. The anisotropic model of the aortic material showed higher stress values at the peak moment of systole, which may be a key factor determining the strength characteristics of the aorta and pulmonary artery. Additionally, this mechanical parameter is important when installing a central shunt, since it is in the area of the central anastomosis that an increase in stress on the aortic wall is observed. According to computations, the anisotropic model shows smaller values for the displacements of both the aorta and the shunt, which in turn may affect the success of preoperative predictions. Thus, it can be concluded that the anisotropic properties of the aorta play an important role in preoperative modeling. View Full-Text
Keywords: hemodynamics; modified Blalock–Taussig shunt; hyperelasticity; anisotropy; fluid–structure interaction hemodynamics; modified Blalock–Taussig shunt; hyperelasticity; anisotropy; fluid–structure interaction
►▼ Show Figures 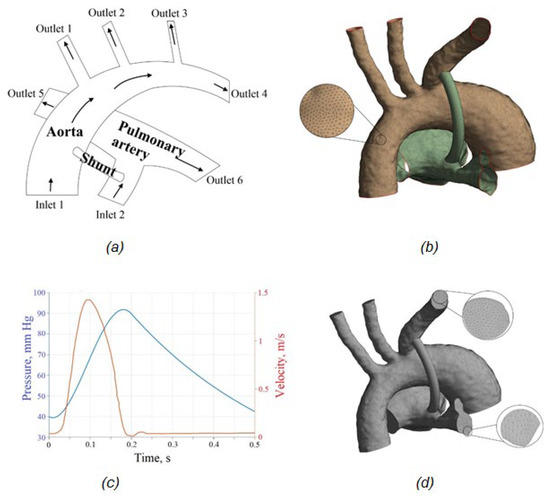