Hydrogel microspheres are widely used in tissue engineering, such as 3D cell culture and injection therapy, and among which, heterogeneous microspheres are drawing much attention as a promising tool to carry multiple cell types in separated phases. However, it is still a big challenge to fabricate heterogeneous gel microspheres with excellent resolution and different material components in limited sizes. Here, we developed a multi-channel dynamic micromixer, which can use active mechanical mixing to achieve rapid mixing with multi-component materials and extrude the homogenized material. By changing the flow rate ratio of the solutions of the two components and by rapidly mixing in the micromixer, real-time concentration change of the mixed material at the outlet could be monitored in a process so-called “gradient printing”. By studying the mixing efficiency of the micromixer, its size and process parameters were optimized. Using the novel dynamic gradient printing method, the composition of the hydrogel microspheres can be distributed in any proportion and alginate heterogeneous gel microspheres with adjustable cell concentration were fabricated. The effects of cell concentration on cell viability and proliferation ability under three-dimensional culture conditions were also studied. The results showed that cells have very low death rate and can exchange substances within the microspheres. Due to the micromixing ability of the micromixers, the demand for biological reagents and materials such as cells, proteins, cytokines and other materials could be greatly reduced, which helps reduce the experimental cost and improve the feasibility of the method in practical use. The heterogeneous gel microsphere can be greatly valuable for research in various fields such as analytical chemistry, microarray, drug screening, and tissue culture. View Full-Text
Keywords: sodium alginate; heterogeneous gel spheres; biological manufacturing; three-dimensional cell culture sodium alginate; heterogeneous gel spheres; biological manufacturing; three-dimensional cell culture
►▼ Show Figures 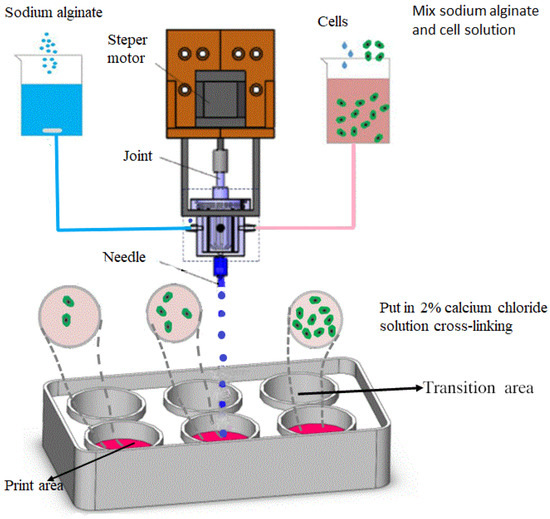