Energy transfer is one of the essentials of mechanical wave propagation (along with momentum transport). Here, it is studied in disordered one-dimensional model systems mimicking force-chains in real systems. The pre-stressed random masses (other types of disorder lead to qualitatively similar behavior) interact through (linearized) Hertzian repulsive forces, which allows solving the deterministic problem analytically. The main goal, a simpler, faster stochastic model for energy propagation, is presented in the second part, after the basic equations are re-visited and the phenomenology of pulse propagation in disordered granular chains is reviewed. First, the propagation of energy in space is studied. With increasing disorder (quantified by the standard deviation of the random mass distribution), the attenuation of pulsed signals increases, transiting from ballistic propagation (in ordered systems) towards diffusive-like characteristics, due to energy localization at the source. Second, the evolution of energy in time by transfer across wavenumbers is examined, using the standing wave initial conditions of all wavenumbers. Again, the decay of energy (both the rate and amount) increases with disorder, as well as with the wavenumber. The dispersive ballistic transport in ordered systems transits to low-pass filtering, due to disorder, where localization of energy occurs at the lowest masses in the chain. Instead of dealing with the too many degrees of freedom or only with the lowest of all the many eigenmodes of the system, we propose a stochastic master equation approach with reduced complexity, where all frequencies/energies are grouped into bands. The mean field stochastic model, the matrix of energy-transfer probabilities between bands, is calibrated from the deterministic analytical solutions by ensemble averaging various band-to-band transfer situations for short times, as well as considering the basis energy levels (decaying with the wavenumber increasing) that are not transferred. Finally, the propagation of energy in the wavenumber space at transient times validates the stochastic model, suggesting applications in wave analysis for non-destructive testing, underground resource exploration, etc. View Full-Text
Keywords: wave propagation; 1D granular chain; stochastic model; master equation; disorder wave propagation; 1D granular chain; stochastic model; master equation; disorder
►▼ Show Figures 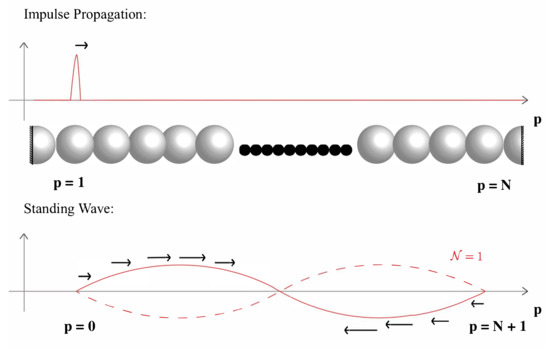