:
This paper presents results on tribological characteristics for polymer blends made of polybutylene terephthalate (PBT) and polytetrafluoroethylene (PTFE). This blend is relatively new in research as PBT has restricted processability because of its processing temperature near the degradation one. Tests were done block-on-ring tribotester, in dry regime, the variables being the PTFE concentration (0%, 5%, 10% and 15% wt) and the sliding regime parameters (load: 1, 2.5 and 5 N, the sliding speed: 0.25, 0.5 and 0.75 m/s, and the sliding distance: 2500, 5000 and 7500 m). Results are encouraging as PBT as neat polymer has very good tribological characteristics in terms of friction coefficient and wear rate. SEM investigation reveals a quite uniform dispersion of PTFE drops in the PBT matrix. Either considered a composite or a blend, the mixture PBT + 15% PTFE exhibits a very good tribological behavior, the resulting material gathering both stable and low friction coefficient and a linear wear rate lower than each component when tested under the same conditions.
Keywords:
polybutylene terephthalate (PBT); polytetrafluoroethylene (PTFE); blend PBT + PTFE; block-on-ring test; linear wear rate; friction coefficient

The polymer (PBT) and the blends (PBT + PTFE) formulated for this tribological research were processed by die molding, resulting in bone specimens of type 1A, as recommended by SR EN ISO 527-2:2012 [37], at Monofil SA (Neamt, Romania). The commercial grade of PBT used was Crastin 6130 NC010 (as supplied by DuPont, Bucharest, Romania) [38].
The commercial grade of PTFE was NFF FT-1-1T® Flontech (Ospitaletto, Brescia, Italy), with an average particle size of ~20 μm [39]. The dispersion of immiscible polymers is important in obtaining good results (dimension stability, mechanical and thermal, including impact, tribological characteristics, chemical resistance etc.).
For this study, the role of PTFE as an added material used in the following recipes was in concentrations of 5, 10 and 15% wt.
The parallelepiped block (dimensions of 16.5 mm × 10 mm × 4 mm) was obtained by cutting parts from the central bone specimens. The other component of the friction pair was the external ring of the rolling bearing KBS 30202 (Kedron Bearings Services LLC, Frankfort, KY, USA), having a diameter of Ø35 mm and a width of 10 mm, made of steel grade 100Cr6, with 60 −62 HRC and Ra = 0.8 μm. The shapes and dimensions of the friction couple (Timken-type) are presented in Figure 2.
The materials code and the average values for mechanical characteristics of the polymeric blends tested are presented in Table 1.
For the forces selected, the Hertz pressure in contact was calculated with the help of the Hertz contact calculator, included in UMT-2, UMT Test Viewer software (Version 2.14 Build 77, CETR, Campbell, CA, USA) [40], and the results are given in Table 2. Taking into account the elastoplastic characteristic of the block contact, these calculated values are estimated. A more realistic evaluation could be done with the help of the finite element method by introducing an adequate constitutive model of the block material. Values for Poisson coefficient were taken from literature and the values for the elasticity modulus (Young modulus) are average values experimentally determined by Georgescu from tensile tests. For all tests, the length of the contact between the block and steel ring was 4 mm.
The parameters of the block-on-ring test, for one material, are presented in Table 3. After a literature survey [7,41,42,43,44], each test was repeated twice, and the authors mentioned if the plots present one test or an average of the two tests.
The friction coefficient (COF) was monitored using a Universal UMT-2 (CETR®, Campbell, CA, USA) tribometer that had a transducer capable of measuring in actual time the friction force and calculating COF as a ratio between the normal force and the friction force, in any moment t of the test. The tribometer software [40] allows for viewing measured and calculated parameters.
The scanning electron microscope Quanta 200 3D from the Faculty of Mechanical Engineering (Technical University “Gheorghe Asachi” of Iasi, Iasi, Romania) and the scanning electron microscope FEI Quanta 200 (“Dunarea de Jos” University of Galati, Galati, Romania) were used for investigating the worn surfaces.

This relatively new entry in the family of polymer blends, PBT + PTFE, is promising in tribological applications, at least for the parameters tested. By adding PTFE in PBT, the friction coefficient is kept in narrow range F = 2.5–5 N, v = 0.25–0.75 m/s and is less sensitive to PTFE concentration if the dispersion is of good quality. Local agglomerations of PTFE detach from the PBT matrix more easily and generate higher wear rates and oscillations of the friction coefficient.
Results for testing PBT + PTFE blends in dry conditions revealed that tribological characteristics are influenced by PTFE concentration and the test regime (load and sliding velocity). Components made of these blends can lower the power loss and enlarge the durability by reducing wear characteristics.
Linear wear rate have better values for longer sliding distance, meaning that wear is more intense at the beginning of sliding; the transfer process and the plastic deformation of the superficial layer allow for reducing friction and wear. The presence of PTFE reduces wear, especially for 5% and 15%. For 10%, this parameter increased, but the SEM investigation revealed poorer dispersion of PTFE. This decrease in wear rate is more obvious for higher velocities and loads, meaning that the polymeric material has to be compressed to make it less prone to be scratched and torn off by metallic texture.
In order to underline the better wear resistance of blends PBT + PTFE, the authors tested blocks made of neat PTFE for the sliding distance of L = 7500 m and load F = 5 N. When comparing to the results obtained for the blend PBT + 15% PTFE (PF15), it was in the favor of the blend:

The experimental results, especially for the long sliding distance against steel (7.5 km), recommend using a PBT + 15% PTFE polymer blend as a replacement for components for tribological applications made only of PTFE in household appliances and automotive components. Components made of these blends could lower the power loss and enlarge the durability by reducing wear characteristics.

This research was funded by Faculty of Engineering, “Dunarea de Jos” University of Galati, Romania.

The authors thanks to Doina Constantinescu, from Monofil Savinesti SA, for technical support in obtaining the samples. 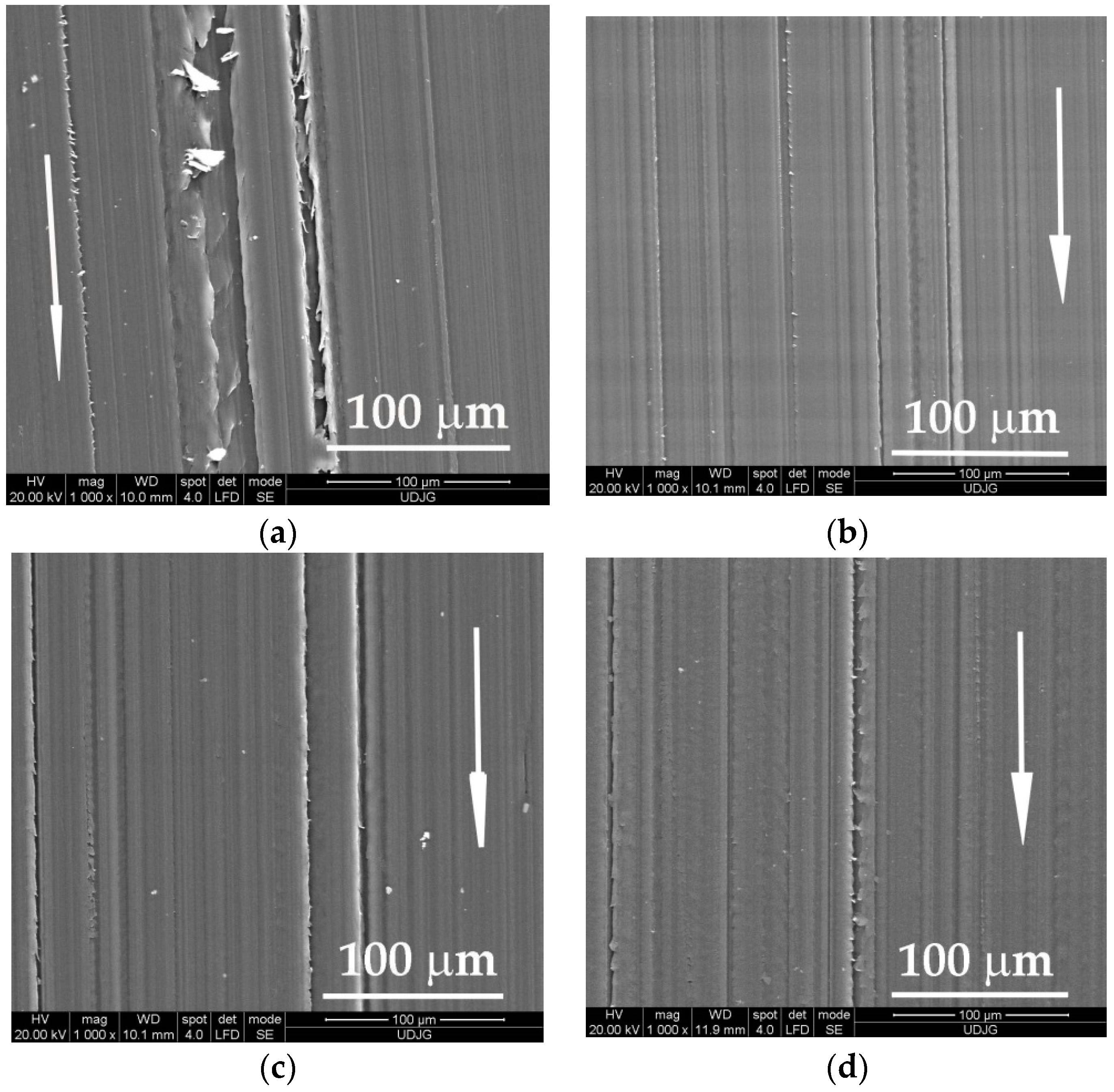 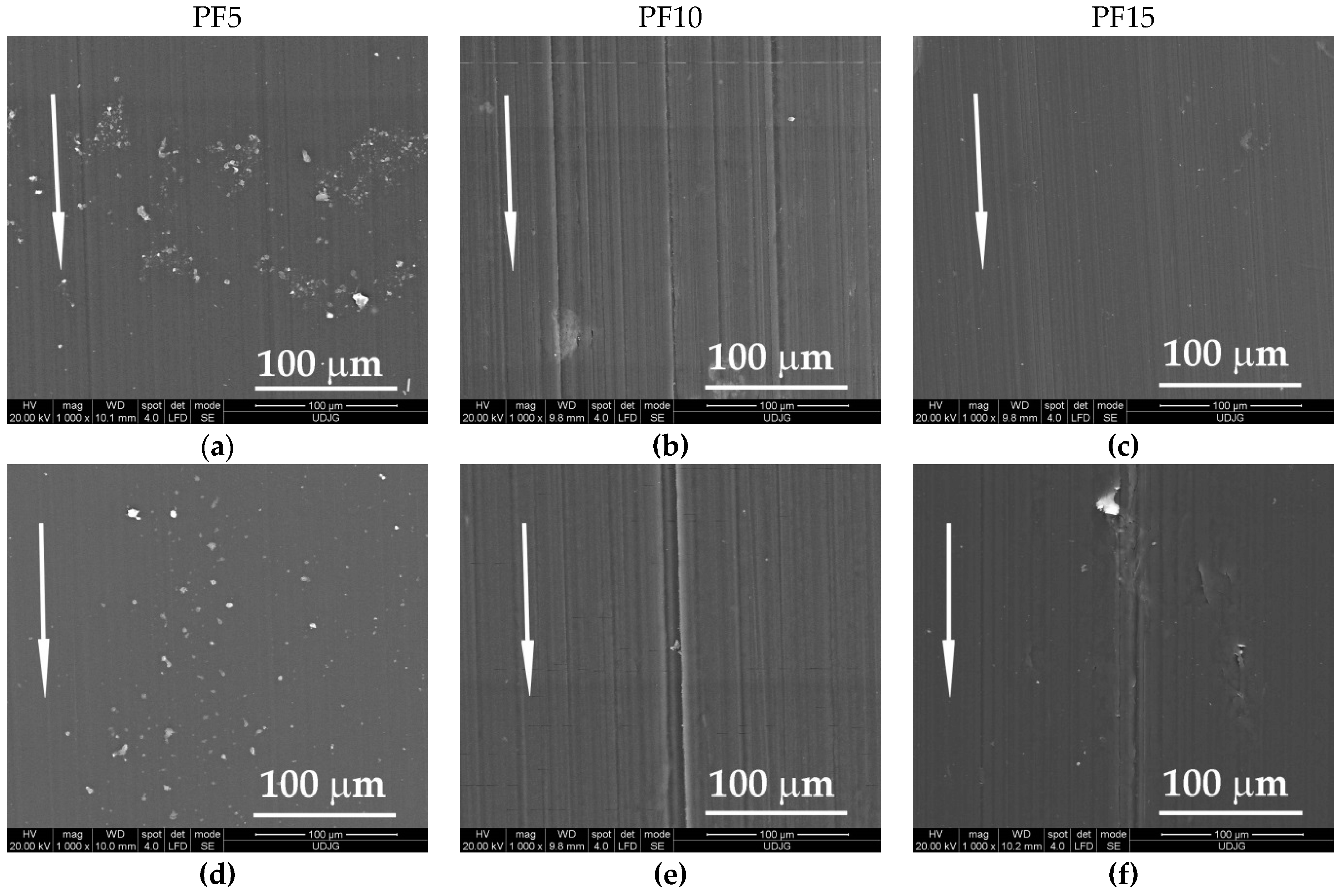 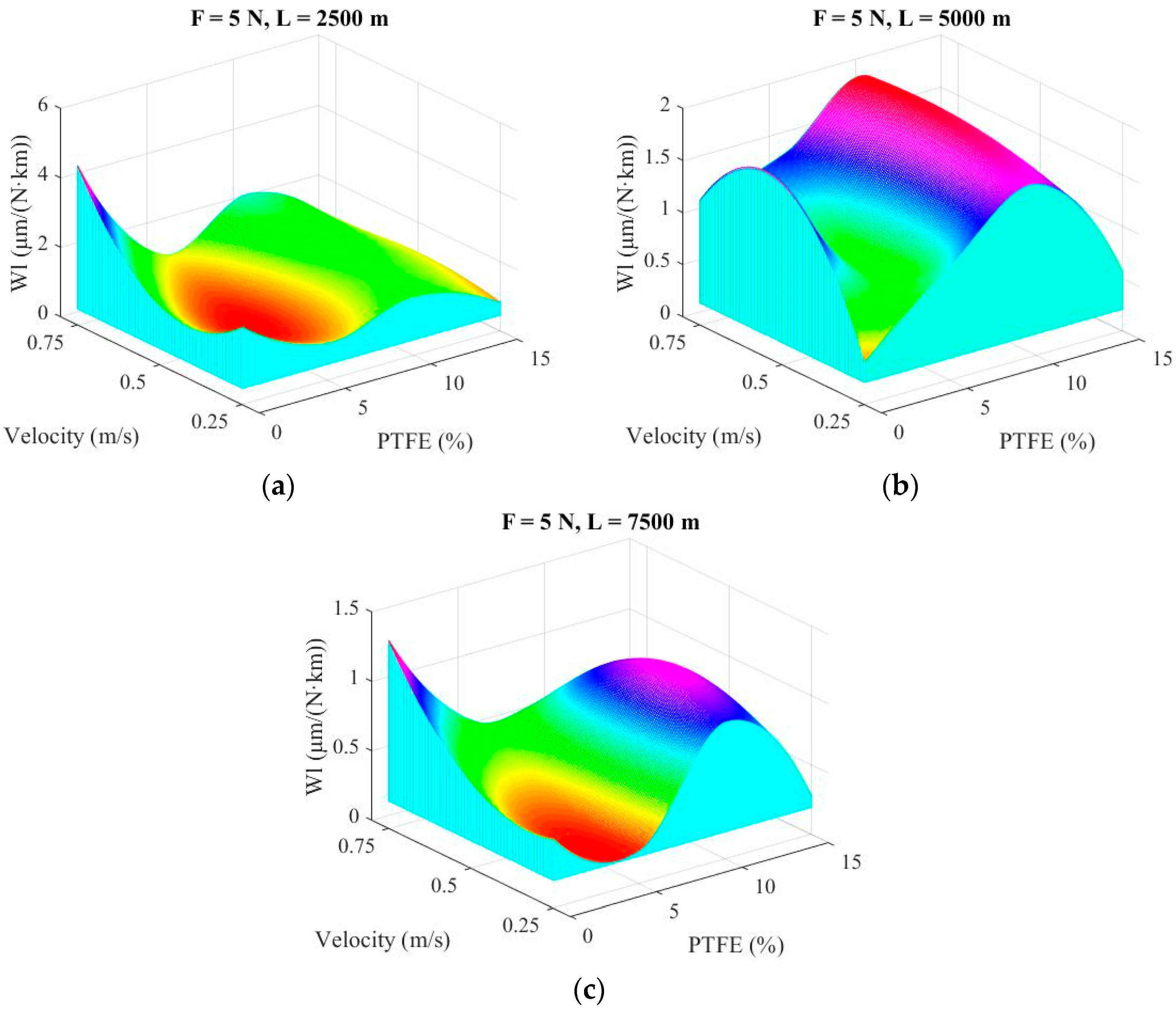 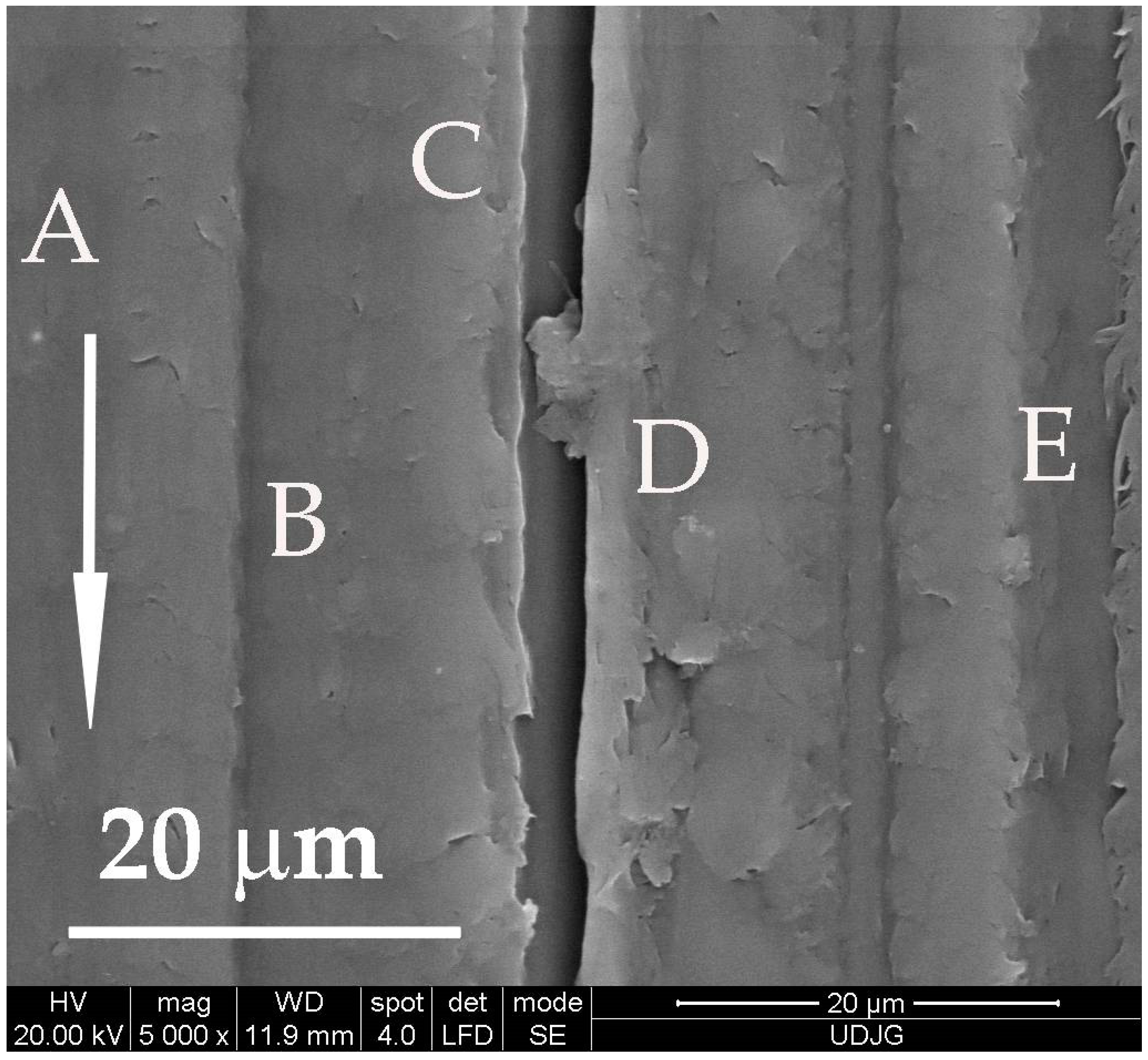