Columns of stepwise variable bending stiffness are encountered in the engineering practice quite often. Two different load cases can be distinguished: firstly, the axial force acting only at the end of the column; secondly, besides the force acting at the end, the additional force acting at the place where the section changes suddenly. Expressions for critical forces for these two cases of loading are required to correctly design such columns. Analytical formulae defining critical forces for pin-ended columns are derived and presented in the paper. Derivations were based on the Euler-Bernoulli theory of beams. The energetic criterion of Timoshenko was adopted as the buckling criterion. Both formulae were derived in the form of Rayleigh quotients using the Mathematica® system. The correctness of formulae was verified based on one the of transcendental equations derived from differential equations of stability and presented by Volmir. Comparisons to results obtained by other authors were presented, as well. The derived formulae on the critical forces can be directly used by designers in procedures leading to the column’s buckling resistance assessment. The relatively simple procedure leading to buckling resistance assessment of steel stepped columns and based on general Ayrton-Perry approach was proposed in this work. The series of experimental tests made on steel, stepped columns and numerical simulations have confirmed the correctness of the presented approach. View Full-Text
Keywords: stepped columns; critical force; buckling resistance; analytical formulae; experimental tests; numerical simulations stepped columns; critical force; buckling resistance; analytical formulae; experimental tests; numerical simulations
►▼ Show Figures 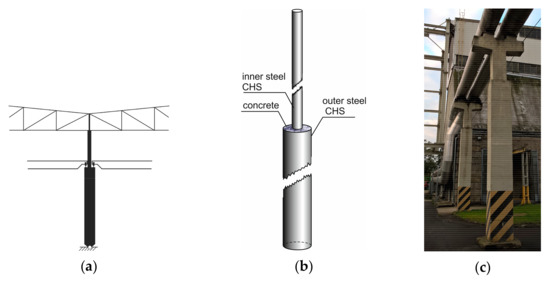