The present study aimed to evaluate the influence of manual torque (10 Ncm) versus clinical torque (30 Ncm), which is recommended by the manufacturer, on the total length of morse cone implant abutments. Twenty specimens were prepared and distributed into two groups: group 1 with ten analogs for morse cone type implant, and group 2 with ten morse type implants, size 4.3 × 15 cm. In each group, the distance between the implant platform to the top of the prosthetic abutment (abutment height) was measured and subjected to a torque of 10 Ncm. Then, the 30 Ncm torque was applied to the same abutment, and abutment height was measured. The distance between the top of the abutment and the implant/analog base was measured. In order to verify the clinical reproducibility of the experiment, comparisons between the abutment height of the analog at 10 Ncm and the implant at 30 Ncm were performed, showing a greater discrepancy in torque for the 10 Ncm analog (p < 0.05). In order to verify if the change in the laboratory protocol from 10 to 30 Ncm could minimize the differences in the height of the prosthetic abutments, the abutment height in groups 1 and 2 was compared with 30 Ncm, and no significant difference was observed (p > 0.05). The data indicated that the manual torque and the torque recommended by the manufacturer influence the total length of the prosthetic abutments of morse cone implants. View Full-Text
Keywords: morse cone; torque; abutment; implant-supported prosthesis morse cone; torque; abutment; implant-supported prosthesis
►▼ Show Figures 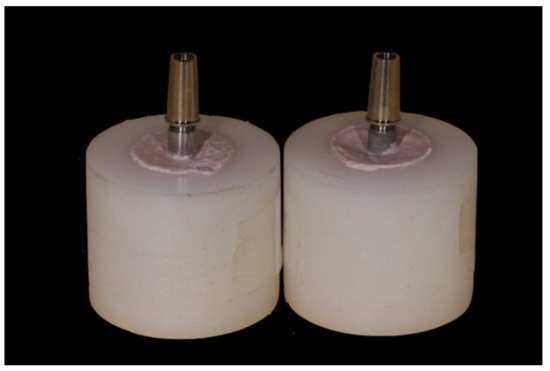