A large number of engineering practices have proved that 80% of concrete structural cracks are mainly caused by the non-load stress generated by the concrete material itself or under the action of environmental temperature and humidity changes [1]. There will be no stress related to temperature deformation during cooling if the concrete structure can move freely. In the early age of a concrete structure, due to the self-drying effect of cement-based materials [2,3,4] or external drying [5,6], the humidity of the concrete decreases, which leads to drying shrinkage deformation of different parts of the structure. The drying shrinkage of the surface of the structure is restrained by the internal concrete, which will produce considerable tensile stress and easily cause surface cracks [7,8]. If the surface cracks are superimposed on the temperature stress or other harmful factors, they will develop deep cracks, or penetrating cracks [9,10] will occur, which seriously endanger the safety of the structure. Taking the Sichuan–Tibet Railway in the construction of Western China as an example, there are many high-temperature tunnels along the line, and the ground temperature is 28.7 to 89.0 °C. High temperature and low humidity [11,12] are the main forms of tunnel high ground temperature. The rapid heating and dehydration of the concrete after pouring under the action of a high ground temperature will lead to the deterioration of the microstructure of cement-based materials [13,14]. Combined with the combined effect of physical and chemical shrinkage, the performance of concrete will be greatly affected. How to prevent cracks in tunnel lining concrete constructed in a high-temperature and low-humidity environment [15] has gradually become a problem faced by the engineering community, which has attracted close attention.
On the other hand, as a multiphase composite material, concrete will produce initial cracks before external load, namely, initial damage [16], which mainly includes interfacial cracks caused by uneven settlement between the coarse aggregate and mortar [17], and mortar cracks caused by uneven shrinkage of the mortar itself [18]. According to the microscopic mechanism, the microcracks in concrete begin to increase at the beginning of tensile damage. With the increase in the damage degree, the microcracks gradually increase. The performance of concrete materials depends largely on the internal microcracks. Under the action of an external load, the microcracks in concrete will expand and converge, finally forming macrocracks. Macrocracks will cause strength, stiffness and other performance degradations, and even material damage [19,20], namely, material damage. The macroscopic cracks will cause new damage and then accumulate to cause the cracks to expand. This continuous expansion will cause great harm to the stability of the structure.
In fact, the concrete structure will be restrained, either restrained by the external rock base [21], restrained by the deformation difference caused by the temperature gradient inside [22] or restrained by the drying shrinkage of the structural surface by the internal concrete [23]. Restraints will also increase the damage of the concrete structure to a certain extent, and microcracks will further increase, thereby increasing the risk of cracking in the concrete structure. At present, the widely used restrained experimental methods are the temperature stress machine method [24,25], the ring restrained method [26,27], the elliptical ring restrained method [28,29], the axial restrained method [30,31], the plate restrained method [32], etc. However, the above methods have at least one shortcoming, such as a high equipment cost, difficult production or poor operability in a high-temperature environment [33].
Based on the characteristics of the low thermal expansion coefficient and high strength of Invar alloy [34], a concrete specimen restraint device was designed in this paper. The device is simple in structure, low in cost and strong in operability, aiming to more realistically simulate the restrained state of concrete structures during construction. SEM, EDS and XRD were used to study the macroscopic and microscopic properties of the early-age restrained concrete specimen under a high-temperature and low-humidity environment, and the results were compared with those of a non-restrained concrete specimen. The research results may provide guidance for the study of the cracking mechanism of tunnel lining concrete under a high-temperature and low-humidity environment.

P·O 42.5 common Portland cement was used, which conformed to the Chinese standard GB175-2007. Natural fine aggregate was used. The fineness modulus of sand was 2.65. The coarse aggregate was granite gravel. The continuous gradation was 5 to 25 mm. Polycarboxylate superplasticizer was used, and the water was ordinary tap water. Concrete specimens of C30 target strength grade were prepared according to the Chinese standard JGJ55-2011, and the specific mix proportion of concrete is shown in Table 1. In the experiment, the slump of concrete was controlled in the range of 100 to 150 mm by adjusting the amount of water-reducing agent. According to the corresponding mix proportion of concrete, the slump of concrete mixture was 120 mm, which conformed to the Chinese standard JGJ55-2011.

Invar, as a nickel–iron alloy, has a very low coefficient of thermal expansion and can maintain a fixed length in a wide temperature range. Taking Invar alloy as raw material, a relevant restraint device that meets the experimental conditions was designed and manufactured, as shown in Figure 1a, and the non-restrained specimen mold is shown in Figure 1b. The height of the concrete specimens was designed to be 100 mm, and the thickness of all wood panels was 17 mm. The specific dimensions of the top view of the restrained device and mold are shown in Figure 1c,d, respectively. The restrained and non-restrained specimens were poured according to the designed mix proportion.

In order to ensure the one-dimensional transmission of moisture along the height direction of the specimen, tin foil paper and oil paper were laid on the inner surface and bottom of the restraint device and the non-restrained specimen mold, and a layer of waterproof coating was brushed onto these. For the non-restrained specimen after mold removal and sealing with tin foil wrapping, all specimens were only left on the upper surface in contact with the air.
The plastic tubes for placing the sensor with an outer diameter of 20 mm were prepared. Two segments of a 3 mm-wide unconnected annular belt along the outer ring line 2 mm away from the bottom of the tube were cut, and the bottom of the plastic tube was sealed with a plastic sheet. The stainless steel bars with a diameter of 18 mm were prepared and placed in the plastic pipe in advance, and the inner wall of the plastic pipe was kept in close contact with the steel bar. The length of the steel bar exceeded the upper end of the plastic pipe by at least 5 cm for easy removal. The purpose was to ensure that the cement slurry did not penetrate from the bottom hole during the vibration process. The length of the sensor probe was 3 cm, and two O-shaped rubber sealing rings were sleeved at the position of 3 cm. Then, the mixed concrete was poured into the mold and fully vibrated with a vibrating bar. Finally, the plastic tube with a steel bar was slowly inserted into the corresponding position of the concrete specimen. According to the above steps, three plastic pipes were inserted into each concrete specimen, and their depths in the concrete were 1 cm, 3 cm and 5 cm, as shown in Figure 3.
The steel bar was slowly pulled out after the pouring was completed for a period of time. The slurry remaining at the bottom of the plastic tube was sucked out with a sponge, and then the sensor was placed in the plastic tube, where the top of the sensor probe was as close as possible to the bottom of the plastic tube. As there was a gap between the outer wall of the sensor and the plastic tube, in order to ensure the accuracy of the collected humidity, a 2 mm-thick O-ring was placed 3 cm above the sensing part of the sensor so that the bottom of the plastic tube formed a sealed space of 3 cm in length. At the same time, the gap between the sensor and the PVC pipe was filled with polymer liquid sealant at the top of the plastic pipe to ensure that the sensor could accurately measure the temperature and humidity at the specified position. Then, the prepared concrete specimens were placed in the environmental test chamber, the environmental temperature was set at 50 °C and the relative humidity was set at 30%. The temperature and humidity were collected, and the data were recorded every 1 min.

In this paper, through the combination of macro experiments and micro-SEM, EDS and XRD detection methods, the following main conclusions were obtained for the early-age restrained concrete specimen under the environmental conditions of 50 °C and 30% relative humidity.

This research was funded by the National Natural Science Foundation of China, grant numbers 51679074 and 52079049, the Fundamental Research Funds for the Central Universities, grant number B200203066, and the Postgraduate Research & Practice Innovation Program of Jiangsu Province, grant number KYCX20_0479.

Data are contained within the article.

The authors acknowledge the financial support from the National Natural Science Foundation of China, the Fundamental Research Funds for the Central Universities and the Postgraduate Research & Practice Innovation Program of Jiangsu Province. 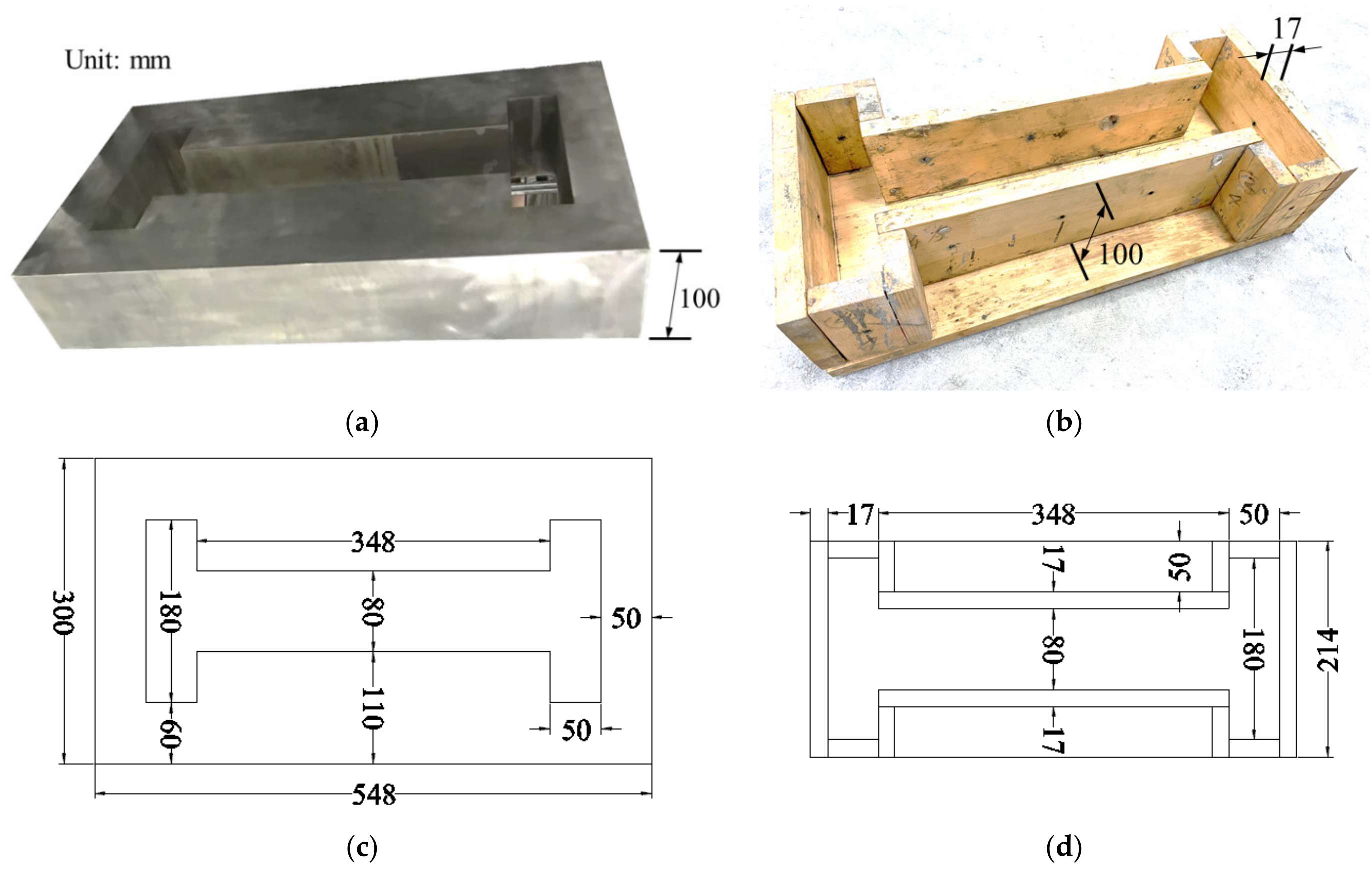 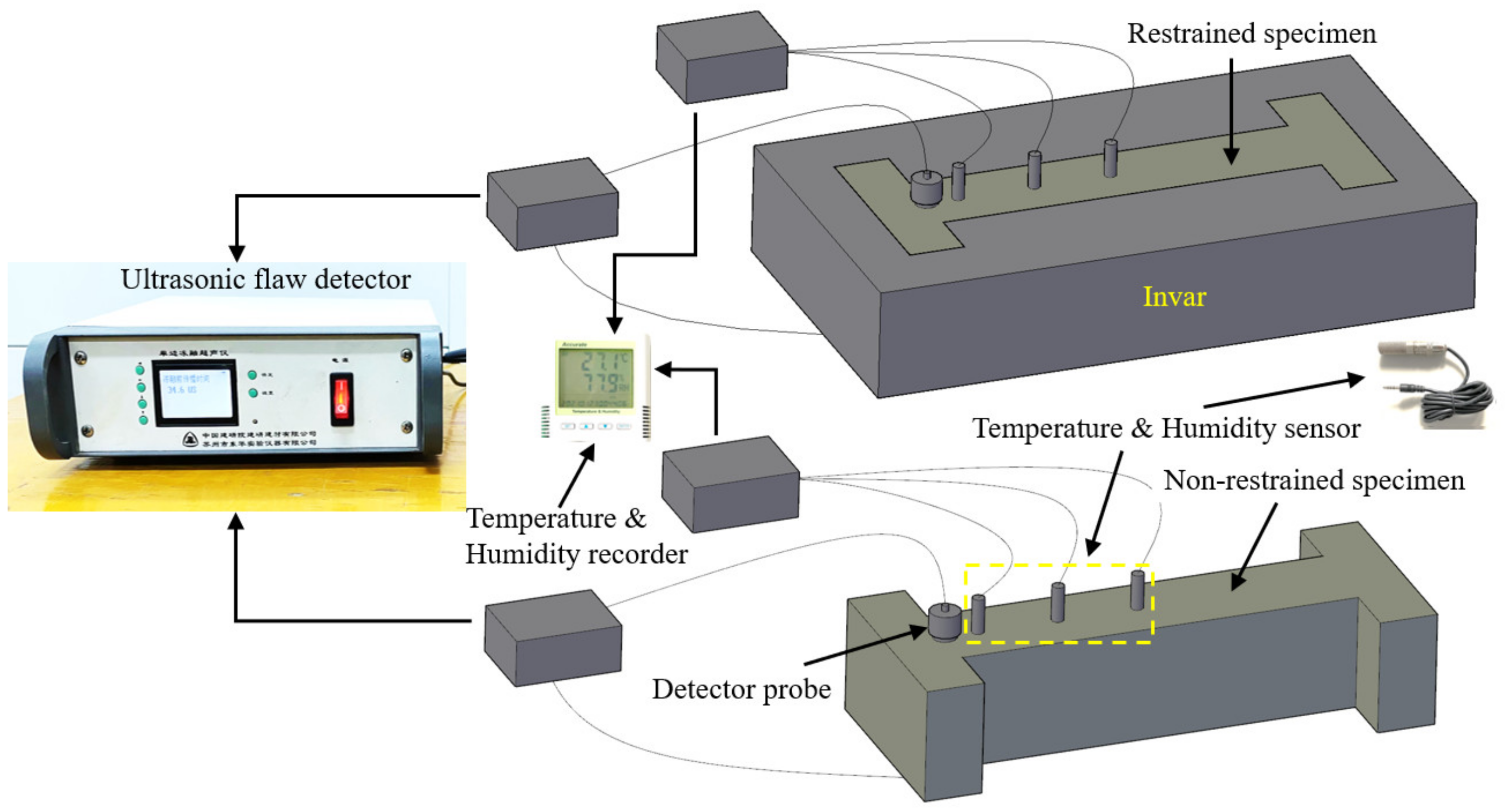 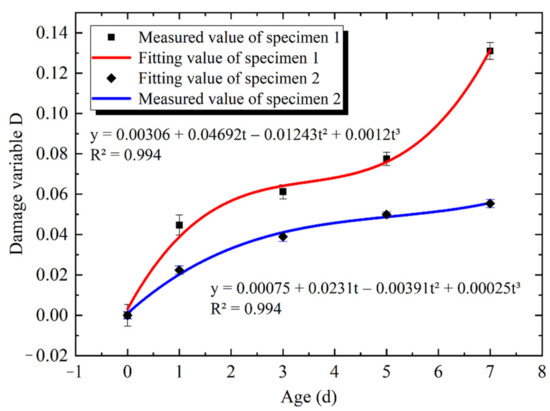 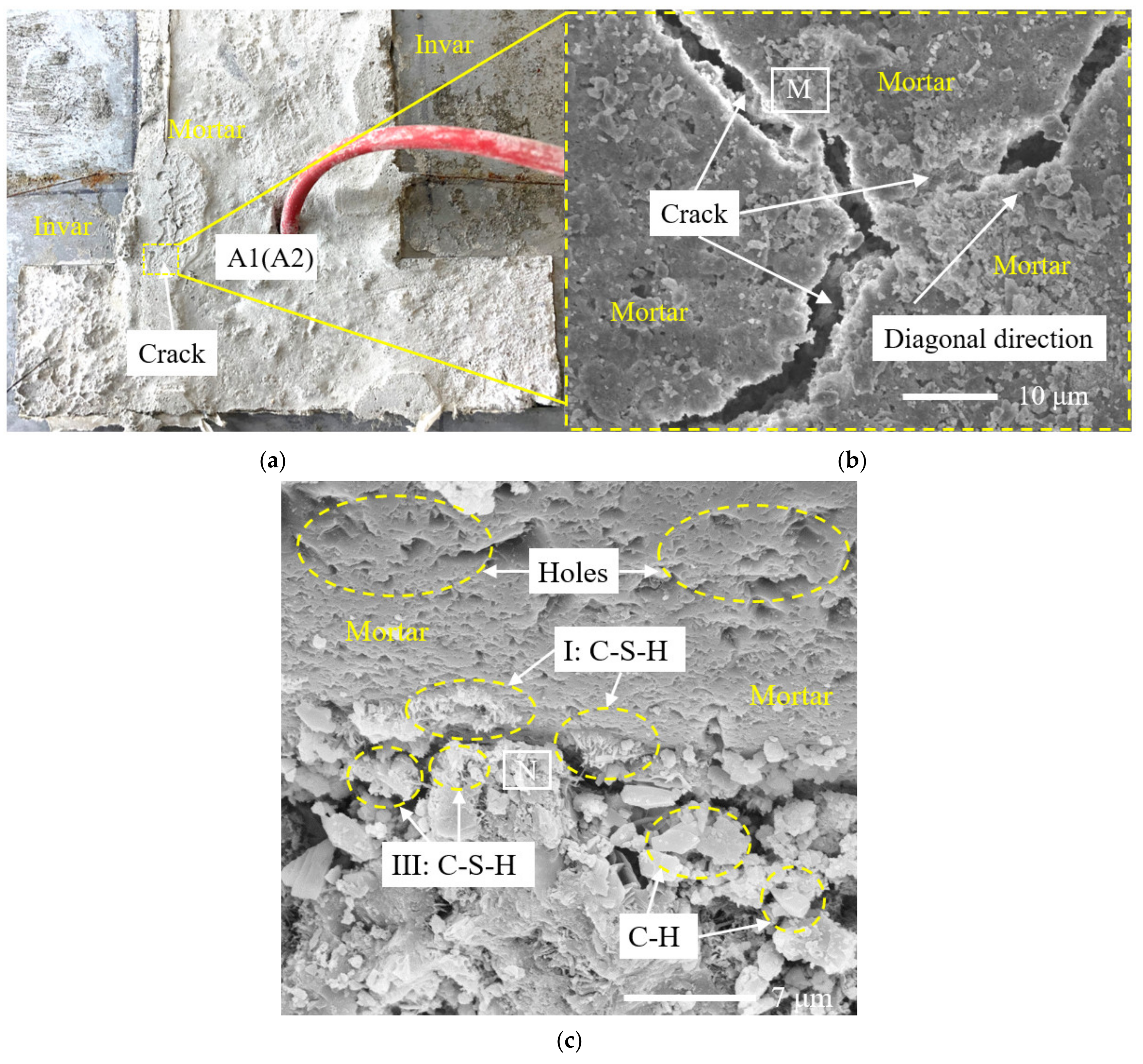 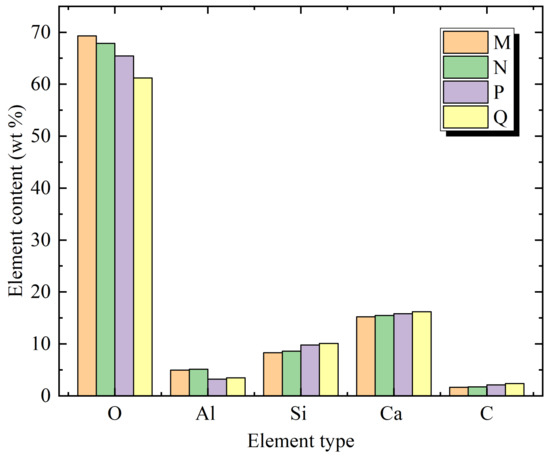 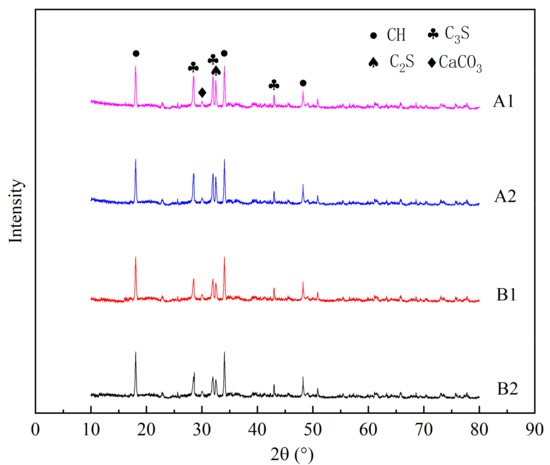 Table 2. Damage variable D of concrete specimens.
Table 2. Damage variable D of concrete specimens.
Note: According to Equation (1), the initial damage of each specimen was different, and the corresponding damage variables would be different for different specimens with the same propagation time.
© 2021 by the authors. Licensee MDPI, Basel, Switzerland. This article is an open access article distributed under the terms and conditions of the Creative Commons Attribution (CC BY) license (https://creativecommons.org/licenses/by/4.0/).
We use cookies on our website to ensure you get the best experience. Read more about our cookies here.
Accept
We have just recently launched a new version of our website. Help us to further improve by taking part in this short 5 minute survey here. here.
Never show this again