The Effect of the Activation Process and Metal Oxide Addition (CaO, MgO, SrO) on the Catalytic and Physicochemical Properties of Natural Zeolite in Transesterification Reaction

In this research, a vermiculite-kaolinite clay (VK) was used to prepare faujasite zeolites via alkaline fusion and hydrothermal crystallisation. The optimal synthesis conditions were 1 h fusion with NaOH at 800 °C, addition of deionised water to the fused sample at a sample to deionised water mass ratio of 1:5, 68 h of non-agitated ageing of the suspension, and 24 h of hydrothermal treatment at 90 °C. The efficacy of the prepared faujasite was compared to raw clay and a reference zeolite material through adsorption experiments of aqueous solutions containing five divalent cations—Cd, Co, Cu, Pb, and Zn. The results showed that in the presence of competing cations at concentrations of 300 mg L−1 and adsorbent loading of 5 g L−1, within the first 10 min, about 99% of Pb, 60% of Cu, 58% of Cd, 28% of Zn, and 19% of Co were removed by the faujasite prepared from clay. Two to four parameter nonlinear adsorption isotherms were used to fit the adsorption data and it was found that overall, three and four parameter isotherms had the best fit for the adsorption process. View Full-Text
Keywords: clay; faujasite; adsorption; nonlinear isotherm; heavy metals; zeolite synthesis clay; faujasite; adsorption; nonlinear isotherm; heavy metals; zeolite synthesis
►▼ Show Figures 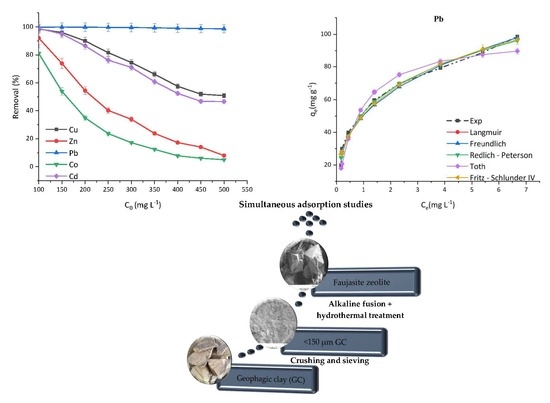