The aim of current in vitro research was to determine the effect of hydrothermal accelerated aging on the mechanical properties and wear of different commercial dental resin composites (RCs). In addition, the effect of expiration date of the composite prior its use was also evaluated. Five commercially available RCs were studied: Conventional RCs (Filtek Supreme XTE, G-aenial Posterior, Denfil, and >3y expired Supreme XTE), bulk-fill RC (Filtek Bulk Fill), and short fiber-reinforced RC (everX Posterior). Three-point flexural test was used for determination of ultimate flexural strength (n = 8). A vickers indenter was used for testing surface microhardness. A wear test was conducted with 15,000 chewing cycles using a dual-axis chewing simulator. Wear pattern was analyzed by a three-dimensional (3D) noncontact optical profilometer. Degree of C=C bond conversion of monomers was determined by FTIR-spectrometry. The specimens were either dry stored for 48 h (37 °C) or boiled (100 °C) for 16 h before testing. Scanning electron microscopy (SEM) was used to evaluate the microstructure of each material. Data were analyzed using ANOVA (p = 0.05). Hydrothermal aging had no significant effects on the surface wear and microhardness of tested RCs (p > 0.05). While flexural strength significantly decreased after aging (p < 0.05), except for G-aenial Posterior, which showed no differences. The lowest average wear depth was found for Filtek Bulk Fill (29 µm) (p < 0.05), while everX Posterior and Denfil showed the highest wear depth values (40, 39 µm) in both conditions. Passing the expiration date for 40 months did not affect the flexural strength and wear of tested RC. SEM demonstrated a significant number of small pits on Denfil’s surface after aging. It was concluded that the effect of accelerated aging may have caused certain weakening of the RC of some brands, whereas no effect was found with one brand of RC. Thus, the accelerated aging appeared to be more dependent on material and tested material property. View Full-Text
Keywords: resin composite; hydrothermal aging; wear; expiration date resin composite; hydrothermal aging; wear; expiration date
►▼ Show Figures 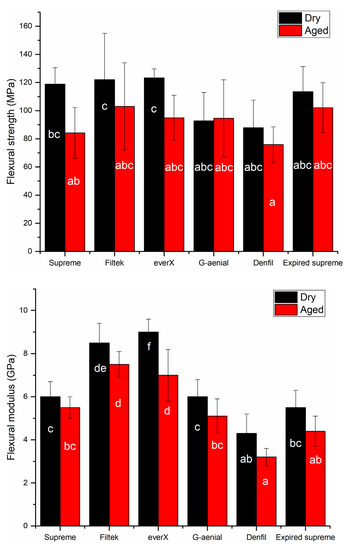